Getting Awesome with My Dad 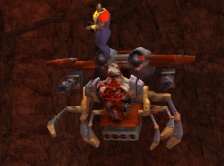 I am the official mascot of Something Awful. Comparing the other writers to me is like comparing a basketball team to the guy in a gorilla suit who performs during the halftime show. My only entertainment value comes from my utter disregard for anything remotely resembling dignity or common sense. After the basketball game is over I follow you home. You still laugh at my antics but it's a nervous and awkward laugh. Three hours pass and I'm still at your house. I've got your computer downloading the Japanese soundtrack to Sonic CD and I'm slowly stripping to MC Hammer's "Can't Touch This". Like the characters in Jean Paul Sartre's existentialist play, No Exit, you've discovered that hell truly is other people, especially if those people are self-deprecating internet writers.

Last week my dad and I went out to dinner. "If you're going to live with me you need to pay rent." my dad said. "Also, I'm sick of having to do your laundry. You always put your pink chaps in with the whites."

"I'll pay you as soon as a major studio picks up my movie script." I said. "It's about two hackers who use a cell phone to commit the crime of the century. The hook is that cell phones are pretty high tech these days so it isn't that farfetched. Also there'll be a shot where the camera zooms in on a computer and then transitions to a bunch of 0's and 1's flying through cyberspace because I think a few other movies have tried that but I'd like to see it done really seamlessly."

"Why are you wearing a dress?"

"Oh, that's because I secretly wish I was a woman."

A waitress walked up to our table and spoke.

"I'm sorry sir, but your son has to leave. He's in violation of our dress code."

"Lady, my son isn't trying to cause any trouble. He just wants to be a woman. And can you blame him? I mean he totally has the legs and hips for it. Do you have any children? Surely you can sympathize with me as a fellow parent. Don't your kids do unusual things sometimes?"

"Well, now that you mention it, my boy does occasionally channel the spirit of a 16th century mariner."

My dad asked me to go to his friend's daughter's graduation party. "You need to get out and meet some people." he said. "Just because shy, introverted nerds are the subject of several hilarious webcomics doesn't mean you should be one."

"Hey, it's your world of graduation parties, power lunches, and charity balls that has turned me into a bitter neo-nihilist whose self loathing drives a monster truck with a bumper sticker of Calvin peeing into the mouth of a naked supermodel."

"Have you been reading an edgy Chuck Palahniuk novel?"

"Look, either you go to the party with me or I take away your kigurumi head."

I recalled my own graduation party. My dad had booked a special reunion concert by 80s rock legends, Dire Straits. Like John Illsley's bass playing, I expected this party to be dull and unremarkable. Little did I know that it would actually turn out to be fun and exciting like a Mark Knopfler guitar solo. "Why?" you may ask. Well, at the risk of giving away some of the surprises that await you in the next few paragraphs, let's just say it involved a special appearance by Tool lead singer, Maynard James Keenan. "I didn't know you knew Maynard James Keenan." I said to my dad in astonishment.

"His father and I served together in Vietnam." my dad said. "Our unit was captured and sent to North Vietnam's secret moon base where we were forced to mine moon rocks under the supervision of vietcong robots equipped with taser guns."

"You know I have my own band too." I said to Maynard. "We play ironic punk covers. Of punk songs. That way they're even more ironic." Maynard showed me his livejournal. It consisted of random animated .gifs and excerpts from Georges Bataille's Story of the Eye. "Doesn't putting all this mystique around your livejournal just open the door for a bunch of elitists to say they're the only ones who "get it"?" I asked. Maynard responded by grabbing the Mcdonalds visor off my head and saying in a mocking tone of voice, "Hey look I'm Jed and I work at Mcdonalds. May I take your order? Do you want fries with that?"

My dad introduced me to his friend's daughter. In what could only be interpreted as an act of seduction, she pretended to punch me in the chest. I was more than happy to reciprocate. Unfortunately I got too excited and committed the ultimate fake punching faux pas; a fake eye poke. We went through the motions of punching each other a few more times but all of the eroticism was gone.

"So how have your doctor's visits been going?" my dad asked.

"My psychiatrist prescribed me a medication that gave me head rushes. Then I became addicted to the head rushes and tried to artificially create them by raising my head up when I stood up. Then I passed out. When I woke up my psychiatrist had taken off my pants, which he said was standard procedure for treating fainting victims."

The party had a well stocked beer cooler. I only mention that as a transition into the following quote by Linkin Park lead singer and master of drinking, Chester Bennington.

"I'm just a regular guy, you know? There's no leotard and cape under my clothes. I shit, I piss, I drink too much and throw up, just like everybody else."

Hey Chester, don't sweat it if this world-weary everyman thing of yours doesn't work out; you still have a plethora of other talents to fall back on. For one, you're capable of delivering the single most horrible, ear-wrenching vocal performance ever recorded (re: the chorus of "Crawling"). In all seriousness though, I don't want any of the young girls reading this update to take Chester's quote as an endorsement of drinking. If you drink at a party you could get taken advantage of. For example, while you're passed out some unscrupulous gentleman could take pictures of you wearing embarrassing hats.

I'm going to bed now, which makes me happy because I just know I'll be dreaming about my dad and I wearing spandex body suits in a future where everything is made out of gummi savers. 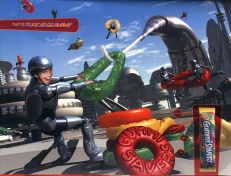