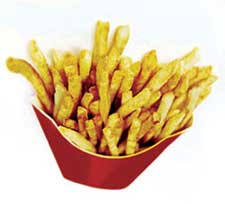 They're reaching out to you. Think how good they would be with some ketchup or a sprinkling of salt. Guess what? THEY'RE FUCKING BAD FOR YOU!

Filmmaker-turned-professional-fatty Morgan Spurlock may have made film history. With his documentary "Supersize Me," he managed to somehow drive all of the journalists in America insane. Since the release and largely positive public response to the film, there has been a media frenzy that Michael Moore would kill for. After all, he was making documentaries and getting fat before it was cool. I have read through dozens of articles - and I'm not talking about movie reviews, here, I mean actual news items - written by real journalists. You know, people who don't write for this site. I've gone through opinion pieces, health pieces, food pieces, and even front page articles, and remarkably enough, not a one of them could even remotely pass for legitimate reporting. Some of them are just flat out retarded, such as the Boston Globe column which referred to "Supersize Me" as a "fairytale." Journalists love to refer to movies as fairytales. It evokes thoughts of delightful childhood innocence, fanciful subject matters, talking animals, and hidden morals. "Supersize Me" is about a real guy eating fries. Not exactly the same thing. Others are just overreactive responses to the film, such as numerous articles with titles like "Don't Supersize Me" (witty, isn't it?) that talk about the health benefits of eating a reasonably sized salad as a meal. So the question is, what the fuck is wrong with people?

The first and most obvious problem with the media's championing of "Supersize Me" is that they are interpreting it as a shrill indictment of McDonalds. And granted, the film certainly doesn't make McDonalds look like the Gandhi of the food service industry, but then again, Gandhi could have benefited from a Big Mac or two. The point is, "Supersize Me" isn't about how healthy or unhealthy McDonalds is, it's about how unhealthy Americans are. The news media has done a fantastic job of ignoring this fact using a tried and true technique that we in the business call the "Putting Your Fingers in Your Ears and Going 'La La La La La La La'" Technique. It's the same technique that the Republican party used to ignore the fact that Iraq had nothing to do with 9-11. Ba-zing! As I was saying, I've come across newspaper and magazine articles trying to make their fat cash off of "Supersize Me" by trying to get some suitably evil quotes out of McDonalds PR staff and legal representatives. Let me say this again: the movie is not meant to attack McDonalds. It's meant to attack Americans whose idea of a balanced diet is getting peanut M&Ms in their McFlurry. Spurlock's results wouldn't have been any different if he had eaten three meals a day at Burger King instead of McDonalds (and I swear that for every email I get about how Burger King is healthier than McDonalds, I will personally kill a whole bushel of penguins, and believe me, you don't want that on your conscience). But even more than any of that, what really stings my clicker is, why is this movie creating such a fuss? What is it telling us that we didn't already know? 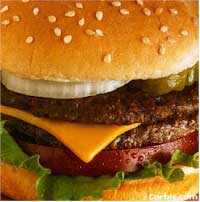 Look at it in its two-patty deliciousness. What could that bun be hiding? Ketchup? Mustard? Barbecue Sauce? Two strips of bacon? Guess what? IT'S FUCKING BAD FOR YOU!

It absolutely blows what's left of my mind that there could possibly be a single person out there who thinks that eating fast food is the secret to a long and healthy life. Are there honestly people who believe that all that grease on their burger is some kind of magical artery lubricant that helps their blood pump more efficiently? I don't know about you, but I was brought up with the impression that on the list of things that were good for me, fruits and vegetables were near the top, whereas fast food was only a couple steps above chewing on carpet tacks. Stopping in at McDonalds or Wendy's was always a luxury in my childhood. It meant my parents thought I had been good recently and deserved a treat, or that they were feeling a little carefree themselves and were willing to give their diets a little hit. But you want to know what thought never crossed my mind during those trips? "Gee, Mommy and Daddy must love me. Finally, they're giving me some proper nutrition!" True, that's partly because the previous sentence was the first time that I've ever used the phrase "proper nutrition," but that's not the point. The point is, who is so hemorrhage-inducingly stupid out there that "Supersize Me" could actually teach them something new about their diets? And more importantly, are these people being allowed to breed? When I heard that Morgan Spurlock was going to eat nothing but McDonalds for thirty days, I didn't think, "Oh, what a marvelous scientific experiment that nutritionists everywhere will surely benefit from." I thought, "Oh man, this guy is going to mess himself up something fierce. This should be hilarious." I thought of it much the same way I think of the stunts they pull on Jackass. Stupid, clearly dangerous, and mildly entertaining.

Look at that sign. Just forty-nine cents for a taco all Sunday long, my friend. You want it, don't - wait, that's Taco Bell, isn't it? Forget it, IT"S FUCKING BAD FOR YOU!

If you ask me, "Supersize Me" is the answer to all those whiny lardladen tubs of polyunsaturated waste that try to make a quick buck by suing fast food corporations for making them obese. Spurlock goes into his thirty day fatfest a pretty averagely built guy, he eats heaping boatloads of fast food (giving audiences everywhere the uncomfortable sensation of having to watch another person eat), and he packs on the pounds like a widowed Anna Nicole Smith. There. Video proof that eating lots and lots of fat means there's lots and lots of fat in your body. And what do we call it when there's lots and lots of fat in your body, boys and girls? That's right, we call it being fucking fat. You are what you eat, right? From now on, whenever some angry parents roll their butterbarrel children into court, claiming that evil fast food companies made their babies too fat to reach their hair, the judge should be able to cite the case of Morgan Spurlock v. His Waistline and promptly dismiss the case. Furthermore, under this rule, the judge should also be able to reassign the children to foster parents who aren't complete mental defectives. The original parents will be burned at the stake, then chopped into patties and served as McMorons, soon to be seen on dollar menus everywhere. That is a service that "Supersize Me" has provided for America, and for that, it should be praised. However, all the idiots out there who think Morgan Spurlock is some sort of dietary messiah who sacrificed his body for the greater good need to pick their chins up off the floor and line up for their asskickings.

Fast food is bad for you. Fast food has always been bad for you. If you currently think, or have ever thought anything to the contrary, well then frankly I'm amazed that even have the mental capacity to read this. Fast food companies have always advertised their products as being tasty and inexpensive. They never tried to pretend this stuff can provide the nourishment you need to run a marathon. Find me one ad where they have a doctor giving a testimonial about the phenomenal nutritional value of the Whopper, and I'll find you a better medication. Come on, people. America is supposed to be the leader of the free world. Since we're already taking that honored and esteemed position and reaming it until it bleeds, the least we could do is not embarrass ourselves further by trying to argue that a trip to McDonalds is the centerpoint of a healthy diet. Let's stop treating Morgan Spurlock like he's anything other than a guy with a video camera who made a huge amount of money by taping himself doing something incredibly stupid. In other words, he's just another modern American icon.

Hello internet friends, Zachary "Spokker Jones" Gutierrez here eating a bucket of fried chicken. Oh boy have I got a supersized Weekend Web for you fine folks today. There are the KickBanned forums served up fresh and hot. The Ultimate Dragon Ball Z forum with your choice of dipping sauce. We've got the RowdyRuff forums sizzling on the grill. And for desert we have Tickle Theater. Then wash it all down with a 84 ounce collector's cup of the Sneezing Fetish forum. Here, have a taste!

So start clogging your ateries with our wacky forum images! Would you like PIES with that?