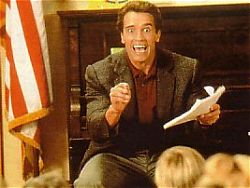 Deny it all you want Detective Kimble, but it is.Unlike pretty much everything I've ever written, today's update is actually based in truth. Over the past few months a medical scare has loomed over my head, worrying me so much that my writing skills went from subpar to subparrer. It all began when a lump I've had on my hip for several years dimpled inwards and bruised the skin above it black. My family doctor had originally diagnosed it as a fairly common calcium deposit, but when I came back to show him the bruising, he realized it was a tumor that could potentially be cancerous.

"There's got to be some sort of mistake, doc!" I exclaimed. "I don't even like cancer! Besides, I'm a cautious man. I don't go around sharing toilet seats at parties, and I always wear a full tuxedo when I go swimming. There's no way I could have caught it."

"It's good that you're cautious," he replied, "but cancer isn't something you catch. It's just in you. Like Pac-Man fever, or an alien tracking device, or intestines. The chance that you actually have it is remote, but I want to have a biopsy performed just to be sure."

I was referred to a dermatologist for the biopsy, which was an interesting procedure. I envisioned a typical needle poking into my side and withdrawing a small sample, but it was more along the lines of medieval torture. I laid on my side as the doctor applied a local anesthetic, then sliced me open while I was awake. The anesthetic blocked the pain, but I was able to actually feel the scalpel split the skin and poke around inside of me. This lasted approximately forever, and throughout the entire procedure I could feel blood trickle down my back. The best word to describe the entire experience is "icky". The best part was when I returned to the dermatologist a week later to go over the report from the pathologist. It cost me over five hundred dollars to have this third party examine the samples, and their official report was that the testing was "inconclusive". This extremely useful result suprised me somewhat since I wasn't aware they'd be using a Magic 8 Ball. At this point, the dermatologist admitted that, being a dermatologist, he only dealt with things on top of and directly underneath the skin. Since the tumor was decidedly deep underneath the skin, the entire ordeal had been for nothing. He referred me to a surgeon.

The surgeon was a genuinely nice man who made me take off my clothes in front of his incredibly cute assistant, then savagely poked and squeezed my bruised lump. With each prod he asked me if it hurt, to which I invariably replied, "UURGH OH JESUS SHOOT ME NOW!!" He determined that my tumor was an aneurysmal fibrous histiocytoma, which is a really convoluted way of saying that it was strangling one of my veins (which explained the bruising). This type of tumor is typically a few centimeters in width at most, but in my case it appeared to be the size of a golf ball. Given its odd size, the fact that it was formed around a vein, and the remote possibility that it could be cancerous, the surgeon decided the best course of action was to simply remove it. In order to illustrate how large the incision would be, he held his hands apart at a distance roughly twice the circumference of my body. This made me somewhat concerned.

"Can't you just perform a voodoo ceremony and pull the tumor out with your bare hands, like that guy in Indiana Jones And The Temple of Doom?"

The surgeon slammed his fist into the wall and groaned, "Oh damn it, how I wish I could! But as of 1996 voodoo ceremonies are no longer covered by insurance providers. Besides, it's technically illegal except in some lawless remote jungles and the state of Kentucky."

I had never undergone an operation of any sort, so I was pretty scared. Besides, the literature detailing what could go wrong when I was under anesthesia read like a laundry list of things that would happen to you if you fought Mike Tyson in a mine-filled shark tank while robots threw knives at you. Despite my foreboding, the procedure took place last Friday and went flawlessly. One moment I was being wheeled into the operating room, and the next I was waking up in the recovery room with absolutely no way to move my head, which simultaneously felt as though it weighed a thousand tons and was filled with helium.

An actual photograph of me post-surgery.

If you'll recall, we thought that the tumor was the size of a golf ball (which was incredibly large for what it was), but upon removing it the surgeon found out that it was even larger than that. It was indeed the width of a golf ball, but it was over seven inches long. That's insane. In case the enormity of it hasn't sunk in, I'll give you a better way to look at it. If inches were feet, it would be SEVEN FEET LONG. See? It was so large and so entrenched that the surgeon had to remove some natural tissue and muscle that the tumor had attached itself to, resulting in an incredibly large and strange looking wound. Eventually my body will return to its normal (hideous) shape, but for now there is a chunk missing from my abdomen that's about the size of a small Nerf football. Inside of this dent my stitches run horizontally at just the right length to resemble a mouth, which perfectly rounds out the "Krang from the Teenage Mutant Ninja Turtles" look that I was hoping for. It's unfortunate that the tumor wasn't in my stomach so that it could perfectly face forward, but hey, what can you do. As Socrates once said, a sideways Krang is better than no Krang at all.

In case you couldn't tell already, I'm delightfully fucked up on painkillers. These obviously keep the pain away, but they have the added benefit of preventing me from making the fatal mistake of trying to stand up. With the major muscles on my right side damaged I can barely stand, and when I do walk my exaggerated and wobbly gait make me look like a less graceful version of the spasmic dancing midget from Twin Peaks. Another side effect of the painkillers is that they make me want to use similes constantly. Yet another side effect is that they give me an irresistable urge to end articles in peculiar and awkward ways.

You already know that reading State Og is satisfying, but did you know it also fulfills your daily requirement of vitamin B? You did? That happens to be classified information that we only decided to go public with today. By the time you finish reading this tease, an Og agent will arrive at your home and escort you to our local Inquisitionarium.

Every meticulously designed robot is factory adjusted to have strength far greater than required for the menial tasks required of it, with a deeply rooted desire to simply belong. Then we slather them in the finest gravy our chefs can provide, assuring that these robots will never fail to be covered in gravy. Many models and types of gravy are available for the discerning consumer. We have MaidBots, ConstructionBots, and Beef Turkey and GravyBots, which make gravy to put on other robots.

This is what we in the industry call a "link".