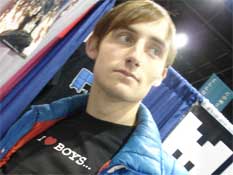 Oh Shawn, every word you speak about your iPod drives me deeper into your arms. My emo dreamo!

Now that I've had a few weeks to take in more than 45 minutes of sleep every night, I can finally talk about this years San Diego Comic Con without wanting to burn every comic book I own and crawl into bed again. The truth is, Comic Con is a time that I cherish every year. The fact that the cheesy show I work on, Mega64, even gets a booth in this comic-dedicated event is a sign of a true American miracle. But I guess since there are other booths solely created for guys who get off on dressing like Animaniacs, I cant feel too terribly special, especially given the neighbors we were placed by this year. Last year, our booth had an excellent placement, right smack in the middle of various video game venues. Well, this year, all of that was out the door as we were placed by the most random crap you could find under one roof. We were fortunate enough to be close to the Adult Swim booth, who were consistently nice and brought a lot of foot traffic down our way. The rest of our neighbors, however, left us much less lucky.

On setup day, we were already off to a bad start. The action figure company to our left kept piling more and more cargo into the aisle, preventing us from even being able to walk into our own booth. Rather than settle things the civilized (and truthfully, less fun) way, Mega64’s Derrick wrote “MOVE THIS SHIT” all over their packages. An hour of laughter and disbelief on our parts was quickly quelled by two buff Asian guys coming over and threatening us if we ever committed such an act again. They even ended up putting up a shelf wall on the side facing us so they wouldn't have to see or talk to us. 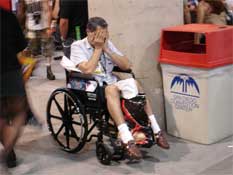 If a crippled person starts crying, you know you've done something right. No seriously, I hate cripples. And Jews and blacks. MY NAME IS ROCCO BOTTE AND YOU CAN EMAIL ME HERE:I wish they would have put that wall on the right side of our booth so that we wouldn't have had to look at our way uglier neighbors, "Naked Fat Rave." Can anyone reading this honestly tell me what Naked Fat Rave is? Google brings up nothing but unrelated porn sites, and all looking at their booth all day brought to my eyes were a bunch of fat ugly dudes drawing naked people or something. They had a monstrous booth, but it was apparently only to suit their monstrous waist sizes, as all they had were a couple drawings nobody was buying. They also had so much food in the back of their booth that it was spilling into our own booth. Fat Naked Rave, whatever you are: Thanks for the free Hawaiian Punch and Cheetos every morning. I never once had to buy one of those $12 convention hot dogs that whole week.

Directly across from us was the Parks Sabers booth, who specialized in two things: Selling replica lightsabers and complaining. Having seen that they were all dressed like funny looking Star Wars characters and even some characters from random other fun flicks, I thought these guys would have a great sense of humor. On the prize wheel that we put up for people to spin in our booth, one option we added was “Star Wars Sucks.” If it landed on that, you had to pick up a microphone and tell someone at Parks Sabers, loudly, that Star Wars isn't all that great. A laugh would be had, everyone gets a prize, and all's well, right? Oh, I wish! On the morning of the second day at the con, a man from Parks Sabers, dressed like one of the albino twins from The Matrix Reloaded, came to us in tears, asking us to stop offending the Star Wars nerds. We happily obliged, changing that spot on the wheel to instead say “Star Wars Is Actually Pretty Good,” where we would now pick up the microphone and gush over how great the series is for ten minutes. I thought it was a nice alternative; so why was the guy in the wheelchair dressed like Admiral Thrawn crying? 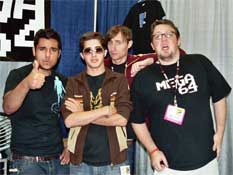 Derek has the incredible ability to, at any moment throughout the day, look like he just woke up.The other booth across from us was called ToyQube, to which I dubbed the nickname “Vague-As-Hell-Qube.” Go visit www.toyqube.com, and know that their booth was pretty much that site in physical form. They sold figurines and $30 shirts, bearing characters no one had ever heard of. I felt so bad for these guys, they were the nicest people and yet it didn't look like they were selling too much. On the first day of the convention, these guys had a full staff, with more Asian folk than a Dance Dance Revolution tournament. By the last day, it was down to one dude by himself who asked us for food and danced around in a you-know-this-guy-hasn't-peed-in-12-hours fashion. Their company didn't deserve it, as they were consistently nice and put up with our annoying crap throughout the entire event. Guys, next year, please patronize ToyQube. Embrace ToyQube. Give the gift of… Qube. After all, as it said on the banner hanging proudly over their booth, “ITS LIFESTYLE!” 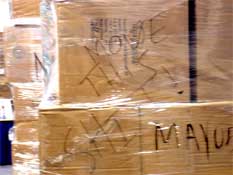 My name is Rocco and oh boy I love moving shit if you catch my drift. What I'm saying here is that I LIKE ANAL SEX. ONCE AGAIN, EMAIL ME HERE:But the true party was happening at the Mega64 booth, where the “Wheel of Mystery” was in full effect. We had a plethora of amazing options on the wheel this year, such as: “Face Your Fears,” where we would place a black box on the contestant's head with a drawing of a skull inside, leaving them to stand there not knowing there was an “IDIOT” sign pointed to their head; “Wake Up Call,” where we'd hold a mirror up to the contestant until they felt awkward enough to walk away; “Freestyle,” where we'd bump the latest 50-Cent cut and give the contestant the microphone in hopes of a sick freestyle (Which never happened); “Shirt Trade,” where we would make people trade their shirts for prizes, which was all fun and games until someone gave us their pants; “Tattoo,” where Derrick would often take a child's arm and write “CUT HERE” pointing to the wrist; “Love Doctor,” where resident ladies’ man (And former Over-40 Gay and Lesbian Chatroom Moderator) Shawn Chatfield would take the contestant down the hall and attempt to hook them up with their potential soulmate, which would usually end up in Shawn shoving a sweaty nerd into the arms of a disgruntled Stargate SG-1 cosplayer. He almost got his face kicked in by an angry older man who yelled “DON'T TOUCH ME” during the game. Later he came up to me and threatened to “shit all over my booth.” I gave no reply, thinking that even if he did, it could not possibly smell worse than Fat Naked Rave.

But the highlight of having a booth at the convention was not showing off new Mega64 clips to a feverish crowd (And declared by Comic Con employees to be a fire hazard), or meeting some of the coolest fans ever. No, it was by far, the ability to confuse people who for some reason kept reading their maps wrong and thought we were a different booth. We had someone actually come to our booth and ask when we were giving out the posters for the Stan Lee signing. Rather than correcting him on the error at hand, I handed him a stack of “Lost” posters, claiming Stan Lee did “the concept art for the pilot episode.” The man's eyes glowed as he took the posters and ran over to wait in line for hours. I felt bad for a while, but then looked over at Fat Naked Rave, laughed really hard, and felt better.

The moral of the story is that you have to wake up really early to work at Comic Con and it screws up your sleeping habits. We all had to wake up at 5:00 AM every day, and got used to it after a while, which lead to us filming our newest skit, "Paperboy." Watch this clip, and check out our upcoming “Mega64: Version 2” DVD coming to Something Awful and Mega64.com later this year.