The Art of Small Talk

So how are you guys doing today? I know, I just hate Thursdays, but at least they are close to Fridays. You know what that means: the weekend! Did you catch that regional sports game last night? Yeah, I hope they do well this year. I know, it's raining like heck today. A good day for ducks and that’s about it. So who do you think is going to win the latest reality show?

This is an example of the depth and scope of my conversations at the corporate office environment where I spend my days. This is a large building where over a thousand white folks toil like gourmet-coffee-fueled ants, spending their days preparing for a winter that will never come. I see these people every day but only know the names of about 3 of them, mostly only coming in contact when waiting to use the community microwave that hasn't been cleaned since the revolutionary war, standing in line to buy the overpriced, bland food at the cafeteria, or throttling the last drops of pee off my wild water weasel at the urinal. These are pointless, hollow, conversations that are tokens of communication without requiring any thought or meaning. This sort of talk gets really old after a while, so I try to just nod politely and escape to my rat's nest so I can feast on my vending machine snacks and post about my anime collection on the Internet. However, it's almost impossible to get though a day without getting pulled in to a banal conversation that makes me want to shoot a nail gun into my temple. Here are the most common topics that dominate workplace banter.

This is the most commonly talked about subject, not only in office environments but society in general. It is a perfect subject for a neutral, non-offensive chat that can sustain a conversation for 30 seconds to 5 minutes. You never hear anybody getting upset at your particular stance on the current state of the weather. Almost all weather talk is mutual complaining, such as "Oh man it's hot out there today. When is his heat going to let up?" To which the other person would respond, "I hear you, but at least it's a dry heat." Then after the brief exchange, the two office workers go their own ways, never to meet again. One becomes the president of the company, and the other gets torn apart by a pack of wild jackals. That’s the way it is in the big city.

The weather is also a perfect topic for small talk because it is ever changing, giving a new topic to discuss every day. Even if it is a perfect day outside, the low point for weather banter, you will still get a few "wow it sure is great out today" comments. This topic also includes complaining about the incompetent weathermen who fail to make perfect predictions, much to the surprise of everybody even though they have been making wrong predictions for thousands of years. Besides telemarketers and liberal country music singers, weathermen are the most hated people on the planet, and most folks would pay a good sum of money to fight one in a gladiator pit. 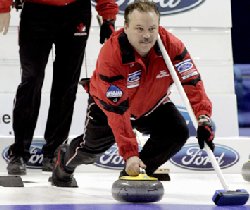 Did you see Harris toss that rock last night? Those broom guys really did a great job.

While the weather is the favorite topic of old maintenance workers and accountants, sports are the main source of conversation with the young Turks at the office. You know, those guys with the leather organizers and really thin cell phones. You'll find them nonchalantly leaning against a cubical and expressing their reaction to a particular sporting event or rumor that they watched that morning on Sportscenter. Then the boss will pass buy and they will straighten up and sheepishly talk about something related to work until they pass. How do I know all of this? Yes, I am one of the "sports guys".

Yeah, I know, sports are kind of stupid and people put a lot of time into thinking about meaningless statistics regarding how many objects a large African threw into a basket. Like the other topics, though, it is a fairly safe subject that can instantly create an atmosphere of conversation between co-workers with little or no commitment. Just as long as you don't start screaming at each other like the retards on the ESPN show "Please Excuse the Interruption", or put a sign on your cubical that say's "Sports Bookie: Pay up Bitch".

Oftentimes, when I go down to the smoking room to stand in the corner and huff that delicious secondhand smoke, I will overhear casual conversation about hit programs such as Lost, American Idol, and Desperate Housewives. I've never watched these shows, because I consider myself an intellectual and spend my nights playing scrabble with my teddy bear "Dr. Nasty" (my record is 252-1). Apparently these shows are really popular and are talked about non-stop in break rooms and around water coolers. One lady wrangled me into a discussion about Lost and asked what I thought was going to happen next. Not wanting to sound like a rube, I pretended to know about the show and said, "The Asian guy is going to ally with the old marine and win the immunity challenge". This led to stifled laughter as they excused themselves, leaving me alone in a smoky haze with my shame. I have not been invited to the company picnic.

Days of the Week

Whenever I dare to venture out into the hallway or cafeteria, I am inevitably confronted with a sad, lonely soul who must comment on what day it is, and the relation of that day to the upcoming weekend. Monday's are the worst, of course, because everybody enjoys revelling in their sorrow that it's no longer the weekend. On Tuesdays they will continue the gripe, complaining that they still have most of the week to go, but at least they are past Monday. On Wednesday, its time to comment on how slow the week is going, but on the bright side, half of it is over with now. Thursday is the day for talking about how they wish it were Friday instead of being Thursday. On Friday, everything will be shits and giggles and everyone spends the day shooting firecrackers out of their ass. The clouds of their gloomy life have parted, and now little cherubs flutter in the sunlight, guiding them into the weekend. Saturday will consist of squabbling with their spouse, chasing around their ADD kids, and powerwashing their deck. On Sunday, they will lay in bed, paralyzed with depression because they have to go to work the next day. Then it's back to work on Monday, to start compiling an Excel spreadsheet on the pros and cons of shooting themselves with a shotgun.

Subjects Not Appropriate for Small Talk

There are a few topics that are taboo when dealing with polite small talk. Anything that can have strong personal belief attached to it is forbidden. If the subject is something deep and important, this could lead to hours of debating in the hallway, destroying production and adding to the economic recession we are currently struggling to get out of. Avoid these at all costs, and if somebody asks your opinion on one of these, headbutt them and run away. 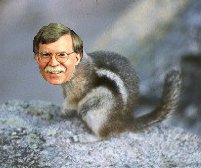 John Bolten is a real nut. Get it? Chipmunks eat nuts.

With the country divided between Bush/Iraq war supporters and the sane people, it is very dangerous to bring any politics into a mundane office environment. You may find that the guy who've you greeted in the hallway everyday is Ashcroft's stepchild, and after you start badmouthing the current administration, he reports you to home security and the next thing you know you're getting your fingers cut off in an interrogation room by Jack Bauer. Even worse, you could have stark differences of opinion with one of your supervisors, and fall into his bad graces. Of course, you can't be fired for your political views, so they'll just say you were caught masturbating to some particularly filthy flow charts.

I learned that this is a poor subject for small talk the hard way. I don't know how the topic came up but I started telling a group of people how God was a joke and we evolved from monkey-men that rode around on horses like in the movie Planet of the Apes. For some reason these co-workers became extremely offended and one even pressed a cross into my forehead, branding a wicked scar there and causing me to howl in agony. Then I was crucified and was going to be burned alive as a heathen, but thankfully the work shift ended. This is an example of how it can be dangerous to admit that you love Satan to a bunch of Jesus-loving yuppies. Leave that pentagram belt buckle at home.

This is another one that might not be the wisest choice of casual discussion. After Zack Parson's thought provoking and somber Daily Dirt on Monday, I brought up the Japanese war atrocities while waiting for a phone conference meeting to start. The people I was addressing in the room became ashen as I described how the women were raped and vivisected while pregnant, with the fetus being used as a football by the soldiers. Little did I know that our Japanese customers were standing by on the speaker phone and heard every word describing the crimes their ancestors committed during WW2. They all commited seppuku in shame and we lost the account.

It's never a good idea to bring up your poor performance last night during a coffee break. This leads to uncomfortable glances and shuffling of the feet. Especially if you go into the fact that you can't maintain an erection unless you hear the tortured screams of the innocent. That kind of stuff tends to be a real downer after just discussing how sunny it is outside.

While writing this, I think I've come up with a solution to hearing small talk all day long. I will pretend that I was trampled while milking a mule during a barn fire (the fire will be real in case there are background checks), and from that point on I will act like I am a deaf-mute with Downs. Everybody will just nod and smile politely, while briskly walking away from my drooling, spastic countenance. They couldn't fire me either, because then I would sue their ass and live on a houseboat for the rest of my life. It's a foolproof plan!

Oh man I wish it was Friday.

There is something very important in today's Daily Dirt. Something that might just save the lives of you and your family. Please click THIS LINK for a free radon check in your home. I also check for black mold and ghosts.