The Case against Freddy Krueger

Ladies and gentlemen, my opponent, Freddy Krueger, wants you to believe he is a man of integrity. He wants you to think he is a man of honesty, principles, and moral perspicacity who will enrich Springwood as mayor, just as he has enriched our daily lives with his quick wit and infectious laugh. Yet, behind Mr. Krueger's winning smile and attractive campaign promises lurk a plethora of lies. I urge you to consider the following facts about Mr. Krueger before voting in tomorrow's election. 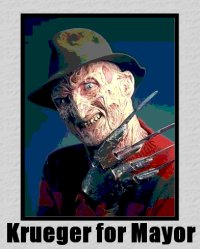 Per town tradition, mayoral candidates have always participated in the Springwood Honey Festival. This year, Mr. Krueger offered to run the Kissing Booth. The result was the lowest Kissing Booth revenue by any volunteer since my nephew Ephram. Now as I've explained to you all before, Ephram has a breath problem. Mr. Krueger's poor performance, however, was clearly due to his bad hygiene, shabby clothing, and habit of shooting live maggots out of his eyeballs. Mr. Krueger has also been known to projectile-vomit a viscous, ambergris-like substance, like he did after kissing my nephew Ephram, who isn't gay but was simply curious about the experience of kissing another man, as all young boys his age are.

Also at the Honey Festival, Krueger refused to remove his fedora during the Honey Festival Anthem. So flagrant was his disregard for tradition that several of our aged veterans, who fought valiantly so that we may enjoy the freedom of honey, fainted from shock. Our oldest veteran, Eli Stevens, was particularly incensed, calling Krueger "an evil demon from hell." In fairness, Mr. Stevens went on to call several other people at the festival demons from hell, including his wife, the Miss Honeybee Pageant winner, and my nephew Ephram, but this was clearly as a result of the disturbed state Mr. Krueger put him in.

Among Mr. Krueger's proposals is a motion to rename every street in our town Elm Street. Elm is a wood I have always deeply admired for its strength and texture, so I initially thought this was a splendid idea. However, it has come to my attention that this move may hurt several local businesses. We all enjoy the fine food and sophisticated entertainment at the Elm Street Gentlemen's Lounge. But if the street change goes into effect, the Lounge will be forced to change its name to avoid confusion about its location. Last night, during my weekly visit to the Lounge, I talked to its owner, Scott Kirkpatrick, who called Krueger's plan "an outrage" and said it would force him to raise his cover charge $5 to pay for a new sign. I think we can all agree this would be horrible, unless some of the money also went to hiring new dancers and possibly refurbishing the runway. 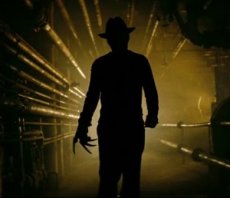 According to Mr. Krueger's resume, his only job experience is as a janitor in the boiler room at the Springwood Power Plant. I visited the plant recently to inquire about Krueger's work and found the boiler room in truly dismal condition. An inch of dust covered everything and all of the lights were either broken or ridiculously dim. The boiler was also poorly maintained such that it produced ominous steam clouds that wafted through the room. The most shocking discovery, though, was the contents of the furnace: inside, I discovered what appeared to be the burnt remains of several children's shoes. Clearly, this evidence implicates Krueger in a truly heinous crime, since environmental laws forbid the burning of trash within our town limits.

For three years, our current mayor, Jeb Hopkins, has overseen construction of the Springwood Aquarium, where people of all ages will go to marvel at the wonders of the deep. The aquarium is three months away from completion - yet Mr. Krueger wants to cancel the project. Instead, he wants to turn the building into his proposed Krueger Home for At-Risk Children. While noble in intent, Krueger's home has several eccentric design features, including a fog maze, a rotating room, and a subterranean dungeon. Mr. Krueger assures us that these areas will be purely for the enjoyment of the children. But the cost of building them will put our town budget into the red for years to come. Not to mention, this still leaves the matter of what to do with the Springwood Aquarium's 2,000-gallon shark tank. Mr. Krueger has generously offered to relocate it to his basement, where he will fill it with cow blood and swim around in it, but this hardly reimburses us for its cost.

If you live on Elm Street, you've probably seen Mr. Krueger's house. You've also probably heard stories about it: that Krueger's stepfather was murdered there and that late at night strange lights and ominous noises emanate from it. Last night, I went to Elm Street to personally investigate the house in question. What I saw was beyond description. Never before have I witnessed such a ghastly parade of otherworldly terrors. However, I eventually I realized I was in a line for a showing of the latest Star Wars film. After vomiting, I eventually found my way to Krueger's house. While refreshingly free of Star Wars fans, it is rather ugly and in need of a new coat of paint.

There are also various rumors around town that Mr. Krueger is an undead monster who murders people in their dreams. But since I am above that sort of mudslinging, I won't comment on those rumors at this time.