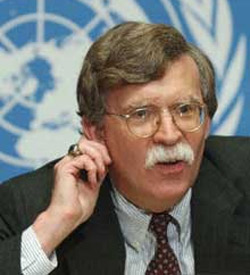 Hah, what did you say, bitch? You run your mouth some more and it's gonna win you a race to the grave.KRANG! You hear that? That's the gong of change I'm ringing and it's reverberating through these musty halls with the force of ten typhoons and a hundred hurricanes. The minute you turn me loose in this place I am going to hit like an earthquake measuring ten on the Bolton scale. Do you know the Bolton scale? That's like 5 times worse than the Richter scale. I am going to start off with Kofi. I am going to slap that bitch so hard on his face that the representative from Madagascar is going to feel it. He'll be offering oil for fucking bandages and ice packs and shit.

People back at the WH (that's WHITE HOUSE for you ingrates) call me The 'Stache and this blinding white mustache is going to launch a thousand flying elbows off the turnbuckle. I am going to climb up into the balcony and come crashing down on Burkina Faso's translator like a man-shaped sack of bricks. You smell that Omar Ventissi? That's your ass getting COOKED North Carolina Barbecue style. No fucking tomatoes in the sauce, bitch.

I am going to roundhouse THE SHIT out of Mahbub Ahmad's sternum. He runs the UN website and it is full of CHICKEN SPLAT. Fuck this globe shit, there needs to be a big picture of my red face up on that website to remind everyone in the UN just who this whole dog and pony show is about now. I killed a dog once with a stare and ponies? I break their necks like dry sticks and then suck out their gizzards. Do ponies even have fucking gizzards? Wrong answer, Agriculture and Livestock Committee Liaison Robin Herring. Ponies have fucking gizzards as of this moment because I say so and if you don't believe me you can take it up with my friend here. His name is Blowstoyourclavicle, first name Hammer. 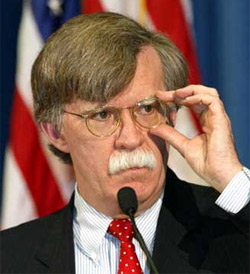 I will BURN YOU DOWN.The 'Stache wants, nay - demands, an entire wing in the commissary. I'm so hungry I could eat a tree. I have eaten trees. Just snap them in half with my - did I mention that I file my teeth? I tell my wife it's to open CD cases and envelopes, but I do it because I want to bite the faces off of the entire Chinese delegation. All of my life, all of that orthodontia, for one crimson moment. Can you see me there, Xian Liao? My eyes glittering in the shadow like two wet spheres of hate? I don't need to see you, I can smell your piss-pants terror from half a mile away. You reek of impotence. I am going to unhinge my jaw and swallow me a couple of long-pigs. You are going to be a part of me FOREVER. The delegation from Timor-Leste can watch you thrash and distend my gullet. I'll wash the taste of your lies from my mouth with your pitcher of pure American water. How thoughtful, someone put a slice of lemon in it.

Do you like the show Timor-Leste? I'm sorry, I didn't bother to learn your names or even identify you as individual human beings because Timor-Leste is worthless. Less than worthless. There will be no more lay-abouts like you now that I'm running things. You're all fired and when I say fired I mean it in the same way the mafia fires people. Your diplomatic passes have been revoked and I have just notified the head of security to escort you from the building. Now, who is the head of security? I guess these scraps of Carman Livingston's name tag wedged between my needlelike incisors means that I'm the new head of security. Mustache rides, five cents.

Oh yes, change is coming to the United Nations. The top ten floors of the UN building are going to look like a beehive that someone threw into hot lava. No one is even going to notice that they burned up because I am going to be ramming their noses into all of this BULL SHIT that has been piling up.

Let's talk specifics, ladies. Let's talk UN "resolutions." That's where you guys decide to do nothing or worse than nothing and the world turns into a big pile of crap. Here are some of the weak sauce you fags have been cooking and let me tell you how I am going to fix them. 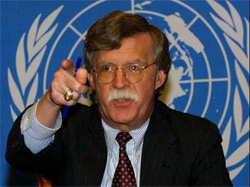 59/261 - Rights of the child
Bolton Says: "Rights of the Child," what the Christ does that even mean? What child are they talking about? I'm not reading through a 40 page PDF to figure out they mean some mud baby eating flies in Nigeria. I'm changing this one to "RESOLUTION: FUCK ABORTION." If anyone kills an unborn baby then The 'Stache is going to cut a swathe through the entire General Assembly with a wood ax.

59/256 - 2001-2010: Decade to Roll Back Malaria in Developing Countries, Particularly in Africa
Bolton Says: I'm gonna roll back some sleeves and develop a couple knuckle sandwiches for the General Assembly over this one. Sorry Africa, 2001-2010 is the Decade of Bolton Rocking Your Fucking Face.

59/253 - United Nations University
Bolton Says: Just what we need a school to teach people to be worthless faggots. I'm starting the University of Hard Knocks and when you don't know how to do math or some shit I am going to bust through a window on a rappelling rope and bury a climbing spike in your throat. BOOYA! Class is in session!

59/202 - The right to food
Bolton Says: More like "the right to be lazy." I swear to god the next time I see some Welfare bitch buying Fruit By the Foot or Cadbury Cream Eggs with foodstamps I am going to burn this whole world to a cinder. You don't get food for doing nothing. If you can't even afford to eat then you shouldn't be allowed to live. Potato skins are like 5.99 at Bennigans. They're totally shit but who can't afford that, I mean honestly here people use your head for a change.

Are you getting the picture yet? No? Let me draw you a picture to explain the NEW ORDER of the UN.

Get it, CHUMPS? This is my town now. It's my WORLD and you guys are just renting plots. Unless you want me to bury you like a dead cat then you are going to suck it up and obey my every command. Now that we've settled that, let's get to uniting.