I'm a Humble Monster and I Have a Story 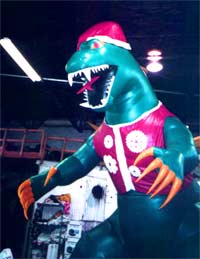 This is what they think of me I guess. Real nice. You captured my looks perfectly.

Listen, it's not often I sit down to talk, but I've got a lot on my mind so I just have to. For the last twenty years, I have been carrying out a reign of terror unlike any other. And for the last twenty years, I've suffered character assassination fierier than the magma breath of my arch nemesis, Incinerator Zero. You've probably heard reports of me and my work on your news programs or on the front pages of the newspapers. They always talk about the lives lost, the destruction caused, and how the costs of rebuilding are incalculable. In short, it's a lot of dwelling on the negatives. They talk so much about the damages I've done that I wonder if I'm more myth than monster these days. Hell, I wonder who I am. Am I the monster they say I am? And when are they going to let me tell my side of the story?

"Little Billy doesn't have a mommy and daddy after the deadly attack on Chicago," the objective reporter whimpers.

Then they cry, "the trail of destruction spans for miles, and experts say the repair costs are likely to exceed ten billion dollars."

"With Hong Kong in total ruins, officials expect the death toll to reach well into the hundreds of thousands," they add, as if to kick sand in my eyes.

Those are a few quotes from my clippings. Laugh all you want, but yeah, I save the articles written about me. Looking at those quotes, and knowing who is responsible, you probably think pretty lowly of me. Why, I must seem like the worst creature to ever walk the earth even! I'm here to tell you that there is another side to this story. There is the unheard side, the side you're going to hear now. I'm talking about my side.

It all started when I was resting comfortably in my cocoon, drifting through space. I wasn't drifting aimlessly, no sir. My cocoon was being pulled towards this bright blue planet. It was that intoxicating scent of radiation, exploding everywhere in the nuclear bombs being tested. That shit is like caviar and a full body massage all rolled into one for me. So yeah, naturally I crash into the Nevada test site and absorb some of that sweet radiation. After napping for a while longer, I claw out of my cocoon and immediately get shot in the face with a goddamn missile. Yeah, it didn't exactly do any damage, but at the time the smoke and fumes wrecked hell on my sinuses. What kind of a fucking wakeup call is that? Good morning, you big dickhead, here is a missile up your nostril!

Being a bit groggy, I overreacted and bulldozed through an army regiment like it was some grandma's thimble collection. Hell, I was just a kid. At least it felt that way. I don't remember anything prior to waking up, so what did I know about proper behavior? Maybe I should have chalked it up to some rookie being a bit trigger-happy and let it slide. But then I never had the benefit of proper parenting. I still don't even know if I even have parents! Can you really fault me for my actions? In a way, you're just as much responsible. I hardly think you'd take a missile attack on your face lightly either. 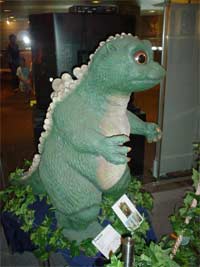 Oh this is great. This isn't degrading to my culture at all.

The next thing I know, jets are chasing me. Yeah, you're allowed to swat at flies that bother you, but if I take a swipe at a jet I'm a horrible monster. I make no apologies for downing those jets, and the way I see it, they had it coming. Especially after that fucking top gun practically tried to fly his jet up my ass. Yeah, good job, ace! You're a real Tom Cruise, you fucking pervert. He tries to give me a cavity search with an F-14 and dies and you know what they do? They honored him like a hero. The last time I checked perverts weren't considered heroes. Maybe if I go and sodomize that giant flying asshole Laserdactyl they'll give me a medal and build a statue of me. I'd do that except I'm not gay and I sure as shit don't want any STDs from that goddamn bird monster. Ah, but I digress.

So what do you expect from me? You guys treat me like crap right from the start and expect me to what? I didn't drift all this way through space just to die. Maybe if you had given me a better welcome I wouldn't have ripped Vegas in half. I probably also wouldn't have coughed up my weird disintegrating fog breath all over Utah. The Mormons sure tried to demonize me for that one.

All that destruction eventually led to me taking an interest in media coverage of my work. You know, you do a job and you like to know how it goes over. Maybe there is room for improvement - I have no ego about my work. I'd smash a city and they would talk about me for months. Of course I liked the attention, so I acted out more and more. The next thing I know I'm a monster feared the world over. That has its advantages, but it's also hard to get your point across. I remember when I showed up in Massachusetts hoping to get out the vote for Dukakis, but nobody listened to my message. They just got scared, fired some missiles at me, flew a helicopter into my freaking eye, and evacuated a two hundred mile radius. A day later I'm next to Willy Horton on a political commercial for the Bush campaign. Don't even get me started on what happened when I showed up in Seattle to protest the WTO.

I don't hold a grudge against the people of this country or any other, but I do dislike the media and the willingness regular people have to support it. What gets my goat is the endless, banal obsession on the consequences. In a way, they are asking for it. I knock down a few buildings and they dedicate weeks to talking about me. You think that hasn't inspired me to do more? Or inspired the other jerks to do more as well? They glorify me as this awesome, indestructible force. Yet, just as they flatter me, they also accuse me of being a monster. Well, granted, I am a monster. But am I that kind of monster? What I'm getting at is that maybe I'm not the problem here.

I was talking to my buddy Tyrannosaurus Ape the other day while we were leveling Greenland. I know, it sounds pretty queer, but we always wanted to check out Greenland because it's such a mystery. Anyway, he starts telling me about the economic factors behind the media. You know, how it's all big business sponsored by big business. None of those networks can really break from the mold and tell my side of the story without offending advertisers or alienating the viewers they've been brainwashing all this time. I tell him, "yeah, but the media is only after the story, no matter what side that puts them on." It was kind of naïve of me to say that, because look at my own personal experience. The media, a supposed bastion of objectivity, pleads for my death without ever asking me to tell my side. Worse, those wretched reporters on the scene sensationalize everything, exaggerating the destruction all the while whining about the loss of human lives. Far be it from me, a giant space lizard, to point out media hypocrisy, but really, when was the last time you saw a news report about the horrors a careless human inflicted on a colony of ants? 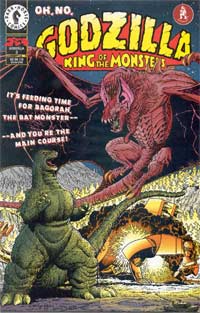 I fucking hate stereotypes! That's all humans can come up with anymore!

Never do they talk about the positive aspects of my rampages. I get a lot of aggression out doing this and that means I'm much more well adjusted in the long run. I take down one city, and that satisfies me for quite awhile. By the time I destroy another city, the last one has already been rebuilt. I'm not into slash and burn or scorched earth style destruction, not like humans. Also, do they ever compliment me on the creative side to my destruction? I don't mean to get all conceptual artist on you guys, but I really like to leave something interesting behind in the wake of my rampages. Something artsy and different, because how often can you turn an entire city into your canvas? That's a pretty big opportunity that I don't take lightly.

And don't say I haven't suffered for my art, because I have. Remember when I leveled Tokyo by doing that crazy cartwheel move over and over again? Yeah, well, you probably also remember when those crazy Asians brought out that moon laser and shot me in the fucking testicles! I kid you not, those crazy cocksuckers aimed straight for my fucking testicles! I was pissing glowing orange blood for months after that. Did anyone show me any sympathy? No, they cried about me poisoning water supplies with my phosphorescent urine. My bladder was a goddamn lava lamp and those cretins were whining about how their drinking water was giving them cancer. You know what they call that? Karma.

So when all is said and done, what am I supposed to think about humans? Not much if you ask me. You crapped on me, now I crap on you. That's the circle of life, right? But know this, things aren't as black and white as you want to believe. I'm not evil and you guys certainly aren't any white knights. I'm not the bad guy here. Yeah, I may wreck your cities, but I do it for you. I do it for your headlines and for revenge against your hostility towards me. Maybe if you took the time to listen to me I wouldn't have to smash your world to pieces, but I get the feeling you'll never learn. One day we might be friends, but until then keep trying to shoot missiles at my private parts and I'll keep break dancing your cities into rubble.