EXPECTATIONS: I've never been the biggest fan of Robot Jox or the Transformers series, mainly because movies about fighting robots stand at the zenith of anti-humanist thought. That, and the terrible acting. Still, I'm excited to see what writer/director Guillermo del Toro might do with the genre; his filmography as a producer includes a handful of shit titles, but his directorial record remains sterling.

REALITY: A couple of weeks ago, Dennis "Corin Tucker's Stalker" Farrell wrote an excellent piece in which he approached World War Z as if it were a video game. Granted, his piece encompasses more than that, primarily highlighting the problem with modern game criticism, but such an approach feels more relevant with each passing week of summer-blockbuster season. The only way to critique something like Pacific Rim and appreciate its strengths is to treat it as computer-generated spectacle. 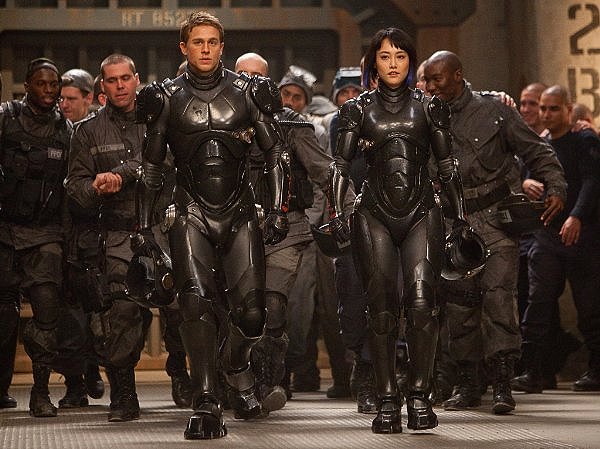 This would look so much cooler if those guys weren't clowning around so much in the back.


If World War Z played like a half beat-em-'up, half stealth-action game, Pacific Rim feels like a fighting game wherein robots bash the shit out of monsters - and vice versa - while stringing together combos in a fully destructible environment with unlockable areas. One minute, your robot (or "jaeger," to use the film's lexicon) has a monster ("kaiju") in a headlock in the middle of the Pacific Ocean. You go for the full-body throw and, BAM!, you're now fighting along the Hong Kong boardwalk. Between fights, you get cut scenes full of awkward exposition and broad comic relief.

Surprisingly, this isn't a bad formula, if you can discount the completely unresponsive controls. For all of its problems - a flabby narrative that could easily be 30 minutes shorter, an Inception-like gimmick that's never fully developed, and the two-dimensional characters - Pacific Rim delivers wonderfully imaginative action sequences that put previous fighting robot movies to shame. (EDITOR'S NOTE: Sean hasn't seen Robot Wars, the venerable 1993 sequel to Robot Jox.) 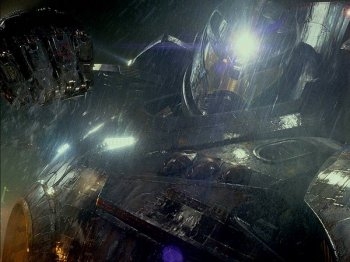 The very idea that in the event of giant monster invasion you would design a machine that can punch is just ludicrous.The robots and monsters have plausible heft. They lumber. The ocean churns around them. Their blows cause tsunamis. The earth quakes. Their misplaced punches topple buildings. Amidst all of this, del Toro strikes a nice balance between fluidity and the stop-start rhythm of giants who must pause to recover after each movement. In the last fight scene, the writers continue upping the ante until Pacific Rim achieves the kind of tension few blockbusters can match.

I'd hesitate to recommend Pacific Rim based on spectacle alone. Fortunately, in its own block-headed way, well ... it's kind of progressive in how it embraces international cooperation (for my money, the best aspect of World War Z and Battleship) and the way it treats the female lead, Mako Mori (Rinko Kikuchi).


When we first meet Mako, assistant to Gen. Stacker Pentecost (Idris Elba), she's quiet, deferential and willing to accept that she will never pilot a jaeger in her quest to avenge her family's death at the hands of a kaiju. But she holds her own in a stick-fighting match against jaeger pilot Raleigh Beckett (Charlie Hunnam, given the least to do of any main character since Addie Bundren), and they urge Gen. Pentecost to reconsider. She quickly grows more assertive, even after she makes a grievous error that gets her and Raleigh grounded. The point is, as the film progresses, she's treated more as Raleigh's equal than a damsel in distress, and their blossoming interracial romance is never a source of conflict.

This is one of those pleasant signs that marquee filmmakers are consciously questioning some of the grab-bag stock character traits that have permeated films since the advent of narrative filmmaking. Yeah, it's about goddamn time, but if you need an academic reason to see Pacific Rim - and I don't know why you'd need an intellectual draw when we're talking about watching robots clobber monsters with Charlie Day channeling Ghostbusters-era Rick Moranis on the sidelines - there you have it.

The great irony of this film is that, in an age in which Hollywood is content to spew regurgitated origin stories for superheroes with whom we're already familiar, Pacific Rim is a sequel to a film that doesn't exist. Its biggest flaws stem from a missing first act. An original premise that incorporates both robots and monsters needs more setup than the same narration that guided us through the trailer but, alas, Pacific Rim begins with ten minutes of Hunnam's "previously on" shtick. I guess you could pretend it's a sequel to Cloverfield. 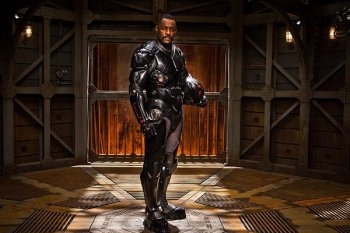 Idris Elba manages to make anything look not stupid.While the film explains its more preposterous embellishments, it's the sum of a bunch of elements that never quite coalesce. For instance, we're told jaegers operate in mind-linked pairs because solo pilots can't tolerate the neural load of operating a hunk of metal that's taller than most buildings. Fine. This affords the screenwriters the opportunity to have Raleigh and Mako explore each other's most traumatic memories. But they ignore its philosophical implications. Like: Why do pilots talk to each other when they're already mind-melded? What's the point of a romance if you can learn everything about your partner in a few seconds? What are the long-term consequences of absorbing the whole sum of someone else's memories and knowledge? I'm not asking for Upstream Color here, just an approach that uses a rich sci-fi concept like shared consciousness as more than a narrative shortcut.

Elsewhere, logistical problems in the premise keep piling up. We're told that one jaeger contains "fifty diesel engines in a single muscle strand." Really? After years of war, with everyone hiding from the giant monsters that keep crawling out of the fucking ocean to play real-world Rampage every few days, where are they getting the oil? Why does every city appear as if it's never been wrecked by robots and monsters before? Such concerns are beyond a movie whose tagline is "go big or go extinct." Pacific Rim, like so many recent blockbusters, exists as a monument to military might; finite resources and mysteriously virginal cityscapes be damned.

All of this contributes to the anti-humanism that even del Toro is unable to shake, despite the knack for balancing spectacle with intimacy in films like Pan's Labyrinth and Hellboy II: The Golden Army. We're told that humans built the first jaeger within eighteen months of the monsters' emergence, but eighteen months is a long time. If humanity takes that long to respond to the threat of extinction, the monsters will probably win. And based on Pacific Rim, they probably deserve to.

MINORITY REPORT: I can just imagine the writers high-fiving each other boisterously after coming up with the name "General Stacker Pentecost." Just look at that damn name. It puts After Earth's Cypher Rage to pitiful shame. - Ian "Professor Clumsy" Maddison