I Just Can't Take It Anymore! 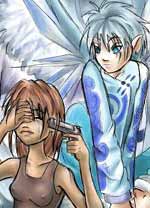 This woman is killing herself because she's an anime character. The angel is there for good luck.I'm not one to make public displays. Hell, I don't even like going out in public unless it's to a Homeowner's Convention. Despite the fact that I don't own a home I like to head over to the local convention center every year and pretend I do. Like the time I went to the 1999 convention and told everyone about my complaints to the local homeowner's association and how they won't let me keep the souls of my fallen enemies in my backyard shed. It was the fastest I have ever gotten kicked out of anything. Lowtax usually gives me his ticket because he says that the convention has grown increasingly corrupt each year and is tired of flying out there. He also says that Betty Thompson from booth #185A should watch out if she knows what's good for her, whatever that means.

Anyway, I'm taking this opportunity to announce that I, Zachary "Spokker Jones" Gutierrez, will be taking my own life tonight. I know what you're saying, "Oh you have so much to live for!" Well yeah, you would think that having a small time article on a website most people only visit for the funny pictures on Tuesday and Friday would make my life complete but that simply isn't the case. The Weekend Web has turned me into an empty shell of a man. The forums I must endure each week have finally taken their toll. Instead of being afraid of the creepy neighbor who is on every sex offender registry from here to Boston like any normal person does, every night I sit in my computer chair, rocking back and forth, scared out of my mind that some deranged furry in a boar costume is going to knock down my door and force me to have sex with him. I have not slept more than 3 hours a night in the past eight months. My slumber, more nightmare than dream, is filled with the most horrific spelling and grammar that no man should be subjected to. I have had dreams where someone from the Pooping and Peeing in Public Places forums just walks right into my wet dream, the one where I am Larry Flint and yelling at some whore that she will never make it in pornography, and shits their pants right then and there. I often wake up in a cold sweat in the dead of night and unable to move. I cannot take it anymore.

"Oh, but that isn't so bad. We've all experienced those things."

For every image that makes it into Weekend Web there are ten more that are too vile to ever make it to the web site. You have not seen the three hundred pound man shitting his Sailor Moon costume. You have not seen the man vomit on his mother's vagina and then have sex with her and then tentacle penises grow out from the mother and rapes her son. You have not seen a person write an entire forty page essay on Dragon Ball Z lIkE tHiS. You have not seen the horrors of some of the private forums I get access to but cannot post images of on this web site for security reasons. I have seen the likes of FBI.org's vB flame board, the CIA's Super Secret Fun Forum, and Kenny Roger's Chicken and Forums. They are more terrible than all of the forums we have ever featured on The Weekend Web combined.

Life wasn't always this way. I used to be a great Mexican diplomat. They called me Spokero Jose and I lived on a exquisite sex ranchero. All day and all night I would partake in siesta and have sex with many beautiful women. They would say to me, "Spokero Jose, please show me your huge pene again." And I would reply, "Ah mujer muda, after you make me a taco." I drank tequila by the bucket on my boat while wearing blue speedos and made calls to local game stores asking them if they had games in stock that I never intended to buy anyway. That all ended the day I signed on to do Weekend Web.

This is all your fault Moof!It was never my intention to do Weekend Web in the first place. I had my sights set on the front page but that damn Tom "Moof" Davies stole the spot right out from under me. It was little over half a year ago when Rich "Lowtax" Kyanka solicited a group of retards from the Boys and Girls club of America to write a bi-weekly article for his website which at the time was called Large and In Charge: A Tribute to Big and Beautiful Women. Right from the start Moof started sending gifts to Lowtax while I slaved away over a hot keyboard writing article after article about that woman from those old Snapple commercials and what she really did behind that counter. When deadline time rolled around Moof said to me, "Hey look over there!", stole my articles, and submitted them as his own. Moof got the part and Lowtax offered me a lesser position doing The Weekend Web. They put my cubicle in the basement right between State Og and Rom Pit while Moof was up on the 11th floor hamming it up with the other front page writers. Moof has since died due to complications arising from my shovel crushing the back of his skull and while none of this ever actually happened, it still stings me to this day. Not even this chance to write the frontpage update can erase the horrible memories of The Weekend Web.

And do I even get one single email of praise, thanks, or even a "Hey that article wasn't too bad" message for my tireless efforts in bringing the world's most horrific forums to you in a neat little package? No! Not a single email I get is positive. Instead my inbox is usually filled with messages like this:

And she emails me that everyday no less. No respect, no respect at all! So I guess I'm really going to do it. The only question now is how. I was thinking of some of the best ways to take my final exit and have come up with the following four choices:

Replace the seat belts in my car with piano wire: I actually forged this idea from one of my earlier ideas designed to get myself out of seatbelt tickets. What I would do is replace the seatbelts in my car with piano wire and tell the cop, "Hey I got one of those foriegn cars with piano wire for seat belts" and explain to him that I cannot put it on because it might kill me. That way he won't write me a ticket for failure to click it. The only problem with this method occurs in the event that there actually is an afterlife. I don't want to be a ghost with no head or legs. Then I have to compete with all of the other retarded ghosts in the Ghost Special Olympics.
Pain: 10
Efficiency: 7
Overall: 5

Become webmaster of Mega Tokyo: Look, we all know this guy is going to off himself eventually, it's just a matter of when. For a guy who is supposedly following his dream of being a white japanese internet comic book writer he sure is sad a lot. To be a fan of his site must be frustrating. Here you are awaiting the next exciting instalment of "I Wish I Were Japanese, Oh God How I Wish I Were Japanese" and instead what loads up is some drawing of a pre-teen girl crying. Becoming webmaster of Mega Tokyo isn't the quickest way to die. It usually happens later in life when the eye slantening surgery fails and your skin yellowing surgery gets botched and you commit sepuku when you realize you're going to have the same pasty white ass for the rest of your life.
Pain: 9
Efficiency: 2
Overall: ^_^

Ham overdose: Everybody knows that ham is nature's candy. But too much candy can be bad for you. The effects of ham overdose are actually quite fun. What happens is that ham starts oozing out of your ears, nose, and eyes, delighting friends and family alike. Then your cells turn into ham cells and begin to multiply. In a few hours you are a huge Christmas ham glazed to perfection. Then your girlfriend or boyfriend eats you while wondering where you are. Once he or she sees the hat you were wearing right next to their plate they scream, "OH MY GOD! This ham is really Spokker Jones! What have I done!" and continues to eat. If you are a fatty then ham overdose does not work. Instead you are entered into the Guiness Book of World Records as the man who can eat the most ham in a single sitting and your life makes a turn for the better. Sexy women begin to flock to you and the shoe endorsements start rolling in.
Pain: 4
Efficiency: 6
Overall:

Sit here and wait: It seems that the least painful way to off myself is to simply let nature take it's course.
Pain: 0
Efficiency: 0
Overall: 10

Now that everything is in order I will now take my own life. I am sorry that it had to come to this but I see no other way out from the terrible forums that plague my every dream. Goodbye friends.

Editor's Note: If you or a loved one is thinking of suicide please visit the Suicide Awareness homepage. Suicide is not the answer. Unless you write for a web site.

The Weekend Web: Bringer of Death

Hello friends, Zachary "Suicide Jones" Gutierrez here with another Weekend of Web. This week we've got a forum with roughly five members talking about what would happen if Goku battled the Muslim diety, a group of nutcases too insane to even have sex, and a good old bunch of conspiracy theorists and UFO nuts.

Come see why critics are calling Weekend Web the sixth best feature about bad forums this Fall! CLICK GODDAMN YOU.