Overview: In a noble attempt to tell children across the globe that violence and guns are the only solutions to being picked on at school, "Full Moon Pictures" has created yet another crappy straight-to-video nightmare that will hopefully inspire a new rash of school shootings throughout America's hick schools.

The Case For: One of the bullies in this video looks like Mike Nelson from MST3K, so whenever he's picking on one of the dorky kids, you'll find yourself shouting, "Go Mike! Kick his ass, Mike!" In addition, this movie also has some of the absolute best catch-phrases you'll ever hear (unless you're fortunate enough to be standing outside the men's room when Al Sharpton is constipated and yelling for the Lord to help his bowels release their inner daemons).

The Case Against: Alien suits are unbelievably lame, dialogue appears to have been made up as they went along, "plot" could fit entirely on a Bazooka Joe candy wrapper, special effects look like an eight-year old went nuts with Photoshop filters. 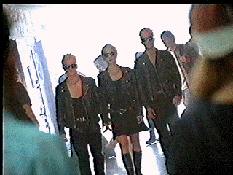 Holy shit, I think the aliens can travel through time, because nobody would dress like that these days.

Next time some idiot kids go nuts and start unloading 9mm clips into their fellow classmates, I'm going to vocally blame "Full Moon Pictures." Hell, while I'm at it, I'm going to blame Full Moon next time my refrigerator breaks, I run out of hot water in the shower, or I have to pay 100 bucks to get some random chemicals in my car taken out and replaced with new random chemicals. Why do I have so much animosity towards Full Moon and their U-Haul full of excruciatingly painful movies? Simple; they continually prove to me that there is no God by constantly pumping out steaming wads of doggy snot like "Alien Arsenal", a film about two geeky kids who find some alien armor and weaponry in their school's basement. If there was a God, he would've smited this company long ago. Unless, of course, smiting has gone out of style, but I can't imagine how that would happen.

In case you weren't aware, Full Moon Pictures has broken up into three main divisions: "Full Moon Pictures" (horror films), "Pulsepounders" (sci-fi), and "Action X-Treme" (action). You can tell they're a real "hardcore" company because they used the letter "x" instead of "ex". This means their films are as intense and exciting as "Xtreme rodeo" and "Xtreme Ultimate Downhill Horseback Water Polo High Jump Wrestling" on ESPN 623. I don't know why Full Moon broke up into these groups, but I have a suspicion the Department of Justice forced them (ala Microsoft) once the government found out that Full Moon had a monopoly on the world's most shittiest videos. Now other companies can feel free to step in and make horrible crap of their own. Oh, it sure is a wonderful day for the consumers of America!

Anyway, like every Full Moon video, this one kicks off with a few hundred minutes of previews from their other insipidly lame movies. Each video just reeks of banality and demands you to publicly point the videos out and mock them to your friends if you ever see a copy at the local "Crazy Ned's Video Store and Semen Exchange Barn". For example, we've got:

"Witchhouse" - Generic Satanic ritual movie about witches or Satan or Satanic witches or Satanic witch aliens or whatever.
"Shapeshifter" - Kid saves parents by using magic to turn into various obviously fake CG animals.
"Excaliber Kid" - Loser kid in the year 2000 travels in time to become a loser kid in mediaeval times.
"Phantom Town" - Kids have to save parents from spooky town full of green lights and retarded old men in cowboy outfits.
"Murdercycle" - Army has to defend the world from an alien... uh... motorcycle (seriously).

Keep in mind that the purpose of previews is to make you want to actually rent the films, not intentionally avoid them as if they were coated with a thick layer of the flesh eating virus. However, Full Moon demonstrates that no matter how hard you try, there's just no way to dress up cat vomit so it looks even remotely presentable. They should just embrace their shittiness and be proud, not try to pass them off as legitimate forms of entertainment aimed at actual human beings. Their videos are about as entertaining as a train derailment, and they should probably treat them as such.