What a Terrible Summer! 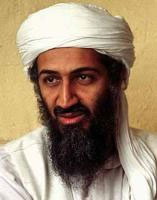 A man so evil he makes even Dr. Doom cry.The big news today, aside from me going outside and witnessing the horror of the cicadas, is that we're due for more terrorism this summer, as we have been for quite a few decades. According to credible sources – hopefully the same credible sources that said Iraq posed an immediate threat to America – terrorist activity is increasing, and all signs point to a summertime attack. It's not hard to see why summer would be an ideal target for the nefarious men and women of Team Terror. More than any other season, summer represents American ideals and values. It's a time when we let down our guard and go outside wearing nothing more than shorts and T-shirts, as if to flaunt our cellulite-riddled bodies to the impoverished nations of the world. Now a lot of you will argue that we dress light because of the warmer temperatures, and there is probably some truth to that, but you never know what the enemy is thinking. Thusly, summer remains Al-Qaida's top target for assassination. Actually, it's physically impossible to attack a season, so I was just joshing around with you there. But don't worry your pretty little heads, because we have bona fide intelligence on the nature of Al-Qaida's upcoming terrorist jamboree.

The intelligence does not include a time, place or method of attack but is among the most disturbing received by the government since the attacks of Sept. 11, 2001, according to a senior federal counterterrorism official who spoke to the AP on condition of anonymity Tuesday.

What's important when interpreting a passage like this is to not take it at face value. If you do, you get nothing. But if you read carefully between the lines and draw some basic conclusions, you can actually learn something. In this instance, we can determine positively that 9/11 was disturbing and that our intelligence agencies are aware of this. Aside from that, you might randomly explode, implode, or melt at any given time due to spontaneous terrorist attacks that may or may not happen sometime in the immediate temporal vicinity. If you do find yourself dying because of terrorists, you can at least die knowing you had a heads up from the government, and, in a way, their blessing.

Everytime I see this chart I giggle. Tee hee hee.Citizens of this country need not worry, for the FBI has created a special taskforce for the express purpose of giving us a real scapegoat when terrorists do manage to attack. This taskforce will give victims and their relatives a clear target to blame and help us as all, as a nation, to unite our patriotic fingers in stern condemnation. Further assurance comes from the fact we won't be upgrading our delicious colored warning system from yellow to yellower. In spite of this, Americans are urged to stay in their homes until the Christmas shopping season begins.

U.S. authorities repeatedly have said al-Qaida is determined to mount an attack on U.S. soil, in part to announce to the world that it remains capable of doing so despite the money and effort that has gone into homeland security in the wake of the Sept. 11 attacks.

I hate to throw out accusations or resort to ad hominem, but this sounds like awfully childish behavior on the part of our terrorist enemies. Are they really so petty as to attack us just to show that they can? More important is what happens if they actually do manage to attack us. We've spent billions of dollars on wars, security upgrades and overhauls, and magic hypnotizing ties for our president to wear, but what if it was all for nothing? My life hasn't been noticeably changed by any of this, Patriot Act and all, so I still have no problem taking my basic freedoms for granted. The secret government agents assigned to monitoring me don't seem to have a problem with my private phone conversations, and they certainly haven't arrested me and denied me a lawyer yet. And I don't fly that often, so I don't mind the added check-in times. It seems to me, though, that if none of those expensive actions are stopping terrorism, maybe we should spend the money on more practical things. I think it would be fucking awesome to take one of those big whales at Seaworld and strap a rocket to its back. At least then we would see some positive results. As is, it looks live we've spent billions of dollars and thousands of lives to give potential terrorists some minor inconveniences at airports. 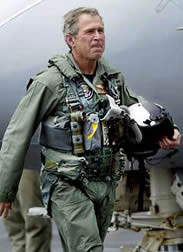 My favorite scene from "Hot Shots! Part Deux"I'm all for hitting the terrorists where it hurts most, and I'm willing to bet dollars to donuts that the best way to do that is by whipping them in the testicles with a copy of the Koran. Unfortunately, with that you need to be very precise. It does no good to bible-whack an innocent person in the testicles, and really only serves to inspire more fanaticism. We certainly don't want a repeat of the Iraqi prison abuse scandal, where the United States accidentally put a shitload of sexual deviants in charge of running the prisons, giving rise to a lively military snuff film industry. What happened there was the worst act of betrayal since Sergeant Slaughter announced his support of Iraq, crippling American morale throughout the dark 1990s. Some staunch Americans will argue that the prison abuse pictures were tasteful and artistic, but that doesn't excuse the fact that every terrorist agency on the planet is going to be using them as recruitment propaganda. The sales pitch is pretty simple: you can either die fighting America, or you can have an ugly American woman damage your self-esteem by pointing at your genitals and laughing. It's pretty clear we need to try adopting new strategies. One possible strategy would be to try luring terrorists into bear traps with promises of lasagna. In order to be compliant with the Geneva Convention we would probably have to give them some lasagna in the end, but that's not such a bad tradeoff if lives are saved.

The plot twist to all of this comes when we learn that these attacks may not happen in summer at all, but in fact might occur in November!

There also is concern terrorists might try to mount an attack to coincide with the November election. The political fallout from the March 11 train bombings in Spain taught al-Qaida that an attack timed to an election can have a major impact. Spain's former ruling party was ousted in the voting that followed the bombing, which killed 191 and injured more than 2,000.

I really don't see this as being possible or practical, since both Kerry and Bush are destined to carry on the war on terror. Ralph Nader is about the only one offering any chance of an exit from that sort of tomfoolery, but he suffers from having a debilitating first name that renders him unable to be taken seriously as a leader. Plus he's Ralph Nader, so that's two strikes against him. A lot of people are still mad that he raped Al Gore, who has since returned to his lair at the center of the earth.

So in the end we're back to where we've been since 9/11. Terrorists are going to attack, and we have no idea when, where, or how. In spite of the total uncertainty of just about everything, the government and media feel compelled to remind us that bad things can happen without warning through hilariously vague and idiotic reports. True, that's more than they did the first time around, and true, they can't say that they didn't warn us. But to tease us with the constant threat of attack from invisible enemies that never materialize is just silly. It confuses me and makes me wonder who is more incompetent, the government or the terrorists? As easy as it is to ignore veiled threats like this, I know that sooner or later the terrorist version of Ed McMahon's Prize Patrol is going to come to my door. When that happens, will my special armor made out of hundreds of American flags and bald eagle feathers be enough to save me? Like a sentient vibrator in the clutches of Anna Nicole Smith, I quiver at the all-encompassing darkness before me.

Been a Long Time Since I Rock and Reviewed

Hey everyone, this is Ben "G-to-the-reasnin" Platt here with a brand new, one of a kind movie review! It's been quite a while since I last took a look at some filmic monstrosity, and I had almost forgotten just how painful it can be. Luckily, "Skinned Alive" came along to remind me.

The raging bender of bad moviemaking begins with a solid three minutes of absolutely nothing. Seriously, it's three full minutes of shots of roads and trees. It's all very pretty and serene, save for the fact that this is where the film quality is the poorest, so there's a lovely buzzing and it looks like someone smeared Vaseline on the lens. But other than that excitement, there's nothing to see here - just a slow series of still shots of nothing happening. No opening credits, no narration, no images of anything in any way relevant to the story, just three minutes of wasted time. Sadly, those three minutes are followed by another hour and fifteen minutes of wasted time, but at least that has stuff in it.

Do yourself a favor - skip the movie, read the review.