Finally, on a Lighter Note

Finally, on a Lighter Note

As part of a request from the Shaggy Butte Mayor's Office to improve town morale, KRUT-5 is dedicated to airing at least one positive story about life in Shaggy Butte each month. These are some of those stories.

After a brief two-year hiatus following the race riot that brought the Farmers' Market to a screeching halt, plans to reopen have many residents clamoring for fresh rhubarbs and savory onions. Until that fateful day two years ago, the Shaggy Butte Farmers Market was a beloved institution, attracting seniors from all across the county to buy and sell fresh produce while enjoying much needed sunshine and fresh air.

The new Farmers' Market promises to bring all that back, minus the bloody, racially motivated violence that left 16 seniors dead. Police believe that new portable metal detectors will help cut down on weapons and months of extensive community outreach have eased tensions between Shaggy Butte's different ethnic groups. Bushels of delicious fresh produce won't hurt things, either.

Growing up near one of Shaggy Butte's many abandoned open pit strip mines left Jeremy Hodge with a still-unidentified skin disease. Jeremy is prone to terrible lesions and spontaneous epidermal rotting, but he's also prone to something else: having a lot of heart. Instead of allowing bullies to get the better of him, Jeremy is fighting back. Not with words or fists, but with infectious smiles and warm, moist hugs. Jeremy's new technique has bullies turning away, if not running scared. It just goes to show you that even in Shaggy Butte, a child's smile is still the most powerful weapon. 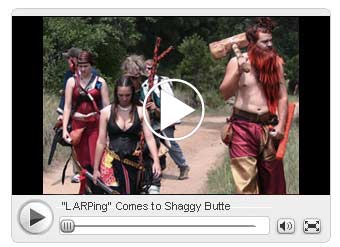 It's called 'Live Action Roleplay," or "LARP" for short, and it's giving Shaggy Butte resident Rick Papajohns a new lease on life. In his teen years Rick developed an unnatural obsession with violently screaming at senior citizens, an act few around town appreciated. But Rick found the perfect therapeutic outlet for his angry yelling: the fantasy battlefields of Elmwood Park. There Rick takes on the guise of a very loud wizard, shouting curses and proudly announcing spells to friend and foe alike.

Rick and his companions aren't always welcomed with open arms. Some residents have complained that the local LARP troop are no better than street toughs or skateboarders. Still, the Shaggy Butte Police Department sees no harm in their antics and is perfectly happy to let them practice their swordplay and sorcery, just so long as it stays pretend.

Rory van Nuys was born with a rare disease that left him with hands so small that they could scarcely grip a thimble without dropping it, but that's not stopping him from achieving his dream. Every day Rory spends hours working in his basement on a project that has given him hope and purpose: knitting tiny clothes for birds. By his count Rory has clothed no less than 80 birds in town, from gentle hummingbirds to busy robins, and shows no signs of slowing down. The birds may not be able to fly while wearing Rory's colorful sweaters and tiny cargo shorts, but they won't freeze to death either. It's all part of one local boy's vision of giving our feathered friends a helping hand, even if that hand is extremely tiny.