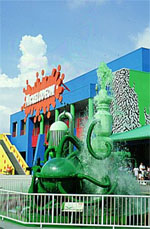 Remember when you kids thought slime was really going to come out of that thing? Yeah. Life is full of disappointments.Kids, take a good look. Take a good long look in daddy's rear view mirror. See that slime geyser? The one daddy took your picture in front of after buying you those adorable 18-dollar David the Gnome t-shirts? Well, that's the last you'll ever see of that slime geyser--or any geyser for that matter. And yes, I've already burned the film. Why? "Why," you ask?

Children. What transpired over the past 30 minutes was the most shameful experience of your father's life. Captured on video to perpetually air on Saturday afternoons for a desperately bored child audience wishing in vain that cartoons hadn't ended three hours ago. There he is, that failure of a man, on his face that same expression Hitler wore in his final moments. Is it shame? Regret? No, children. It is the look of a man whose very being has crumbled. A man who has seen everything he once knew fade into the ether. You children have brought me to ruin.

SHUT UP LINDA THIS IS BETWEEN ME AND THE CHILDREN

Kids, I don't ask very much of you. It's been clear up to this point that you're not able to complete the simplest tasks without half-assing them down your collective legs. But when I ask you to commit yourselves to the one thing that could save this trainwreck of a family, I expect results. When I pull you out of school and have to give the truancy officers knocking at our door excuses like "advanced leukemia," you know that daddy is serious. How many hours did we review those tapes? Do you even remember the Dickenson Family Flag Grab? What about when that quack of a doctor told little Jeffrey he was causing "irreparable" damage to his wrist? It was all for this one moment. And you blew it. 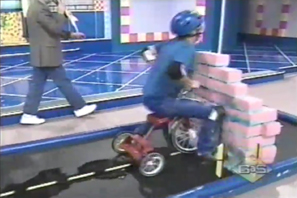 THIS SHOULD HAVE BEEN MY PROUDEST MOMENTWhoa-whoa. Sorry about those hairpin turns, Jeffrey. Should have warned you. Wouldn't want those fruity little wrists to snap like a rotisserie chicken wish bone. GOD DAMNIT LINDA DO YOU WANT TO BE NEXT

Oh, and my little princess, Abby. Don't think I can't see you behind all those tears, sweetie. Now, by the age of three, Abby, I pegged you as being very much like your mother. Not too handy at much of anything, but still able to respond to basic commands. Abby, remember when daddy sold his boat to build that replica of that giant nose thing that was once on a show we will no longer let air in our house? Remember being outside at three in the morning, the cold numbing your fingers, as you frantically searched for the flag daddy hid so carefully? Well, you took those hours of training, and then somehow turned them into thirteen--THIRTEEN!--seconds of what most doctors would consider a clear case of Sudden Onset Down's Syndrome.

Oh, I more than understand your pained looks and frightened whimpers, kids--you probably think this is all in daddy's head. Well, when I went to the bathroom after our grand display of failure to wash the "gack" from my eyes, who should I run into but Double Dare's own Marc Summers? He seemed pretty focused on washing his hands, but I disregarded that, slapped him on the back, and exclaimed "lots of fun" in a misguided attempt to mend my wounded soul. The look of disgust he fired back is no doubt similar to the expression I have been showing to you children for the past 17 minutes. Oh, and he spit on me too LINDA THIS IS NOT ABOUT CHOOSING SIDES THIS IS ABOUT JUSTICE 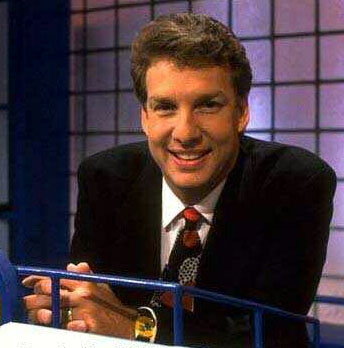 Keep smiling, you smug bastard. It won't stop you from being the poor man's secretly Jewish Dave Coulier.Kids, daddy already set the bar very low for you two. To be honest, daddy encouraged mommy to drink so you would enter this world as part of an unfortunate bowel movement, flushed away to live with those asinine ninja turtles you're both so fond of. But you managed to hang in there 10 and 12 years, respectively, to win prizes that daddy has already claimed as his own. The British Knights? Consider them already in the garbage. The luggage set? Full of everything you'll need for your first foster home. The free tickets to Universal Studios, with Bonus Rent-A-Car package? Ohh, I'm afraid those are still the property of Nickelodeon Studios. Never will they rekindle the dead marriage of your mother and I through fellatio on the Back to the Future ride because that's what I wanted to happen!

Whoop. Sorry for the sudden stop, there--didn't mean to throw you off guard. Hand me that bag, will you honey?

See this gun, kids? Daddy's going to scare some people in that Safeway with it until some nice policemen show up and shoot him in the brain stem. That's my way out of this go-nowhere family, and you'd do well to find your own. Linda--looks like we passed a river not too long ago; how about giving yourself and little Jeffrey and Abby here a nice tour of the bottom? And before I go, just remember these words: in the "physical challenge" known as life, some of us are given water balloons, and some aren't. And you just try making lemonade out of that shit.