Arcades have all but disappeared from America, their place in our cultural landscape phased out by this generation's preferred entertainment destinations such as internet cafes and Slamball arenas. As it becomes increasingly difficult to encounter once-common machines like Street Fighter II, the truly rare arcade games take on legendary status.

It's very likely that you have never heard of the following machines. Some only exist as prototypes, one-off custom cabinets, or were manufactured in runs barely numbering in the dozens. They are nonetheless very important and fascinating pieces of gaming history. 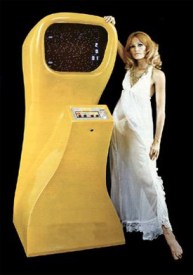 Coin Counter
released in 1971 by Atari

Today there are rigidly structured ways of making a video game. Aside from the occasional mixing of genres and the incremental advancement of technically impressive elements, very little true gameplay innovation occurs. In the early days of the arcade, however, no rules had been established. Everyone was still scrambling to pin down what a video game should and could be. Because designers had no examples to fall back on, they stumbled into all sorts of clever and unique gameplay experiences.

Coin Counter was perhaps the biggest failure of that era.

When players deposited a quarter, the counter on the screen would increase by one. Additionally, a new dot would appear. After every pixel was covered the game would move on to the next level. To represent an increased challenge, deposited quarters only counted as half a coin in the second level, one third of a coin in the third, and so on.

As you might expect, the game was pulled very shortly after release due to children being digitized by the arcade cabinet during thunderstorms. 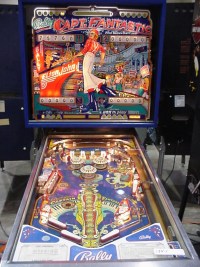 Sir Elton John is known for many things. He shows up at royal weddings, wears shades which have been filed down to a fraction of their original mass, and is widely considered a pinball mage. Some have even called him a pinball illusionist.

When Bally approached the superstar to endorse and design a table game for them, they found that John's vision was as strong as it was unconventional.

In Captain Fantastic, players launch the ball, allow it to bounce around for five seconds, then reach out and hold it in place with their hands. This pause in the action adds a strategic element to the game as players plan their next flipper hit and ramp entry. After five seconds, they then release the ball and continue.

Captain Fantastic is widely considered the inspiration behind future generations of turn-based strategy games and the primary reason for the failure of 1976's other major pinball table: Alice Cooper's Realtime Pinball. 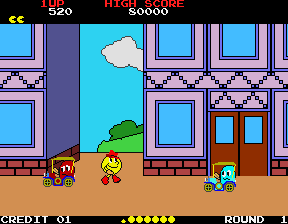 Pacland
released in 1984 by Namco

Everyone is familiar with Pac-Man, but very few know that this icon of the arcade scene actually beat Mario to the punch - appearing in one of the world's first side-scrolling platformers a full year before Super Mario Brothers popularized the genre.

The game had it all. There were ghosts in cars, garish red hats with feathers, springboards to jump over lakes, and even parallax scrolling.

Believe it or not, there was a dog named Chomp-Chomp. Sound familiar? How about enemies that were also mushrooms, power-ups that made Pac-Man larger, and a main villain named Bowser? The game's designer, Shigeru Wiyamoto, was an underappreciated genius. 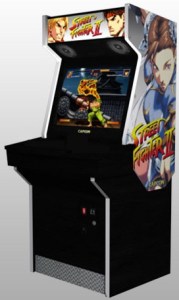 This one-of-a-kind cabinet is one of the most fascinating experiments in arcade history.

When Capcom realized that large crowds were gathering around Street Fighter II cabinets to spectate player matches, inspiration struck. If people were having fun by simply watching, why not make money from this phenomenon?

There were no buttons in Champion Observer Edition. By depositing a credit, you secured a place to watch the A.I. fight against itself. In a remarkably Kinect-like move, Capcom added a microphone and motion sensor above the screen. As you raised your arms in the air repeatedly, the ingame spectators did the same. You yelled and they yelled. You did a backflip and they raised their arms and yelled.

Though there were only a few dozen cabinets produced, this version of the game was a big hit. In arcades across the world, experienced observers were placing their coins under the screen with bravado and stating, "I got next". 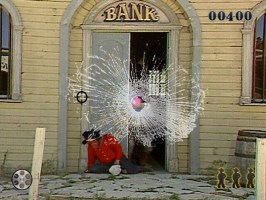 If you haven't played the original Mad Dog McCree, you missed out on an awesomely bad experience. Picture Lethal Enforcers in the old west, all in Full Motion Video. The amount of corny overacting and dudes falling over railings exceeds your wildest dreams.

American Laser Games was so happy with the success of their product that they took half of their earning and invested in a new version of the game that would take advantage of the burgeoning "extreme" trend that was becoming popular with kids.

How was is possible to take such a goofy game and make it extreme? By removing the light guns and replacing them with actual revolvers. Quite a few Extreme Mad Dog McCree machines were produced, but many have been lost to neglect and bullet damage. If you can get your hands on one of these units in good condition, you'll be sitting on a small fortune. 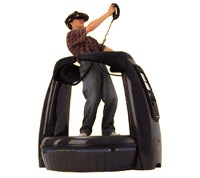 Virtual Reality inspired all sorts of fantastic daydreams, but never actually went anywhere. In other words it was for the 90s.

VR Games put out a handful of titles for their ultra slick and (at the time) high tech Virtual Reality pods. The biggest hit was a multiplayer shooter of sorts with pterodactyls. Another game involved walking around a haunted house with a fork. Their most obscure title, however, was Virtual Reality CAD.

After stepping into the pod and donning their fifty pound headgear, players were transported to a fantastic realm in which they could literally walk around a Computer Aided Drafting program. Using special digital gloves, users manipulated the program to craft wireframe buildings of their own design.

Look out! It's a terrarium! I am fully immersed in this foyer!

Those were a few exclamations that people were likely to shout while playing.