The Lighter Side of Budget Gaming

Hey folks! Our official SA mascot Rich “Lowtax” Kyanka has been summoned to webmaster court to answer charges of internet terrorism, and has forced me under threat of a punch in the face to fill in for him and do today’s update. Since my knowledge of the world is pretty much limited to video games and making vulgar personal threats against the creators of certain video games, I have decided to stick to what I know and use this opportunity to inform the world about video games.

A lot of people seem to think that my media coverage of the gaming world is too unbalanced and negative. I’ve had people email me telling me I should retract a negative review because they and some other guy I don’t know both enjoyed it, I’ve had people tell me I “stereotype like a dumb southern hick” (which caused a dangerous irony overload) and I even had a guy write in to argue about numerical scores, complaining that I gave a game’s graphics a negative 8 when CLEARLY they were no worse than a negative 6. Hell, sometimes I’ve caused people to respond to a review with nonsensical crap like this:

Huh? Well, if I’m writing video game reviews that can cause people to respond to non-serious comments with angry unrelated emails about two groups of people who spend all day devising new and exciting ways to blow each other up, clearly I’m being too negative. Therefore I would like to take my brief time with you to give you three examples of how positive and uplifting I can be and inform you about a few budget-priced games that are worth buying, assuming I can see through the US media bias that clouds my jew robot brain. Beep boop. 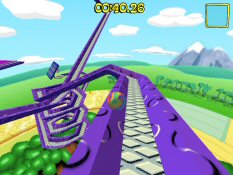 Marble Blaster: I picked this up for five bucks at Gamestop, which is the #1 place in America to find terrible PC games that no one else would ever carry. The box’s promise of “Fast-Paced Marble Racing Action!” intrigued me, and my intrigue only deepened when I checked the back and saw that “this product contains direct access to the internet.” It turns out the Fast-Paced Marble Racing Action is very similar to Super Monkey Ball, with the notable absence of Dole© bananas and random monkey noises.

Instead of using pure keyboard console-style controls, Marble Blaster uses a first-person shooter control scheme, with WASD and mouselook. This sounds like a horrible idea, but in practice it works perfectly. For the most part the game simply functions like Marble Madness or Monkey Ball, with you trying to get your strangely intelligent rubber ball to the end of the level without falling or getting squashed or stabbed or blown up in a suicide attack by one of those Palestinian jerks. Some levels require you to gather a number of gems before reaching the exit, and it really enhances the game when you dive off a cliff to reach the exit and then realize that you missed an area and the one remaining gem you need is now 200 feet above your stupid marble head.

The early Beginner levels tend to be pretty boring, but the Advanced levels more than make up for them. There are a few levels based on rollercoaster designs, a racetrack level where you need to grab the gems around a track in a certain time and you’re completely fucked if you miss a single one, and a Frogger tribute level where you try to get across a floating freeway without getting nailed by a truck and launched off the side of the stage. The later stages also have a number of powerups that you can use to reverse gravity, make yourself stick to walls, grow a little helicopter rotor and float, launch yourself 80 feet and probably a bunch of other shit I’m forgetting. It’s never going to be as popular as the Monkey Ball series, but it’s easily worth five bucks. 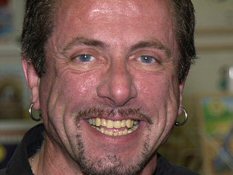 The shiniest director in Hollywood.

Clive Barker’s Undying: Unfortunately I can’t offer a detailed review of Clive Barker’s Undying, since I haven’t gotten around to beating it due to the time I spend intentionally playing horrible games. I also don’t have a lot of background to compare the game to, having never read any of Clive Barker’s books or known anything about him other than the fact that he apparently likes to smile and sweat a lot. But despite my utter lack of knowledge about Clive Barker and the outside world in general, I enjoyed Undying more than any other single-player FPS besides Half Life. The level design is good, the gameplay is fast-paced and getting slashed in the face by a monster actually spins you around and disorients you instead of just making your screen flash a little and letting you calmly aim and shoot back. The game also has a good atmosphere, mostly because it doesn’t take the Resident Evil approach of attempting to terrify you with zombies every ten seconds and trying to get you to quiver in fear at the thought of playing a game.

American McGee’s Alice: This was a pretty well-known third person shooter that didn’t start as a budget title, but most places that carry it sell it for around $10. American McGee’s Alice got a lot of bad press for its story, which is Alice in Wonderland reinterpreted by a 14-year-old at a campfire with a spooky flashlight under his face. While a lot of people flat-out hated the game, I thought it was enjoyable once you got past the silly story. The gameplay isn’t particularly innovative and the enemies have the combined intelligence of coleslaw, but the graphics, the above-average voice acting and the bizarre levels more than make up for it. As a warning I will say that I am probably in the minority by enjoying Alice, but maybe a few people out there will want to try out an uninnovative-but-good action game. But don’t bother if you hate jumping puzzles.

There, you see? Be inspired by the fact that a good 2% of budget priced video games are something other than complete shit. I’m sure there are some more good budget games out there, but I haven’t played very many of them because generally I shop for budget software by searching for the worst possible games, and I usually don’t spend my money on a budget game if it looks like it might be good in any way. If you feel daring enough to spend a hard-earned ten bucks, check out any of these three budget titles, then feel free to email me telling me what I fag I am for playing a game about using an explosive jack-in-the-box to blow up playing cards. And if you learn one lesson from this highly informative update, let it be this: Taylor “Psychosis” Bell couldn’t think of a good topic to write an update about.

When I was a kid, my parents were fortunate enough to occasionally drop 8 bucks on me for some new Star Wars action figure or GI Joe. I had He Man, and Transformers too. Looking back I was pretty spoiled. Now I'm all sad.

I'm not sure how this all ties together, but the forum Goons have mixed the harsh reality of the world with the light heartedness of children’s playthings. Personally I wouldn't mind seeing Optimus Prime cruising down the highway, looking for Decepticon trouble. Would you?