Help Me I Am In Collectibles Hell

The biggest danger associated with living in a free society is not taking that freedom for granted, but dressing it up and treating it like a circus clown. There are some who consider the mere notion of freedom to be something that should be celebrated every day. If patriotism is a body, then freedom is the hand that you continually high five every chance you get. I'm all for freedom and it's great that we have it, but, like oxygen, I consider it something I am entitled to as a human being. Perhaps that's naïve, and I'm sure one day it will be taken away by Ivy League Liberal Vampires, but for now I will just pretend like it's in invisible free commodity.

Dressing freedom up like a circus clown is a popular industry these days. People have come to associate all sorts of things with freedom, like eagles and Harley-Davidsons and wolves. They combine these symbols with other things, to create staggering abominations of art. CollectiblesToday.com, my favorite company in the world, specializes in scraping the bowels of patriotic Americana with a spoon, then compositing the spoils together to create Voltrons of artistic despair.

What a job it must be to work there. To come up with the most bewildering of ideas, and then have those ideas brought to life. Today we'll make some angel figurines, and tomorrow we'll make a sword emblazoned with images of General Lee and the Confederacy. Navigating their site is a strange process when you consider the flow of ideas and subject matter represented. One second you are looking at a statue commemorating the battle of Iwo Jimo, the next you are looking at a collectible plate of Pope John Paul II. Right below John Paul II is a dragon statue. Next to the dragon is an Elvis Presley wall hanging. What strange cosmic force brought these four icons together? A higher power perhaps? Nay, merely a desire to make money off of stupid people.

My dream job in life is to be hired on as a 3d animator making animations for bowling alleys. I'm pretty lousy when it comes to 3d modeling and even more so when it comes to animations, but the idea of spending my days creating little cartoons of anthropomorphic bowling pins locked in a constant struggle with bowling balls is something magnificent and beautiful. Every time you got a split or a strike, a nearby monitor would show my work, my Sistine Chapel. My second dream job would be to design terrible collectibles. I have no doubt that I would get fired from this job within 2-3 hours, depending on how long orientation takes, if I took it remotely seriously. However, if I wanted to keep the job, I am pretty sure my craziest ideas, my most out there "I'm not even remotely serious about this" suggestions would be the ones that get used.

"How about a collectible plate of the Hindenburg, but with pictures of Johnny Cash painted on the side?"

"What about a NY fire engine being driven by Jesus Christ? Did I mention there are wolves painted on the fire engine? Well, there are, okay?"

I could postulate terrible collectible ideas all night, but they would not be as sad as the real ones. So, without further delay, let's take a look at a handful of items from the CollectiblesToday.com catalog and weep. 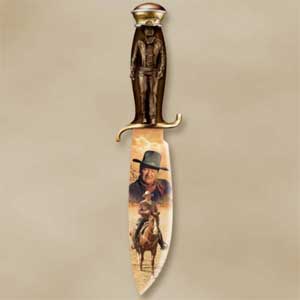 John Wayne's Stabbin' Knife
Film legend John Wayne, famous for stabbing people all the time, is immortalized here in this lovely knife. What drove John Wayne to stab so many? Perhaps you will know his dark secret when you hold his weapon of choice in hand. As this is clearly labeled a "replica," we can ascertain it is identical in nature to the one carried by John Wayne. We can therefore conclude that John Wayne was a deranged egomaniac for having his image painted on the blade and his likeness carved into the handle. All and all this is like the equivalent of Spider-Man pajamas for grown-ups: A pointless exercise in soulless marketing tie-ins. 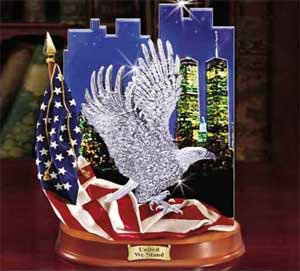 United We Stand Figurine
I have a hard time imagining that anybody could look at this and not laugh, or feel some form of shame. The website describes an "Awe-inspiring crystalline canvas backdrop of the New York skyline." Could you imagine anyone looking at that particular rendition of the New York skyline and being awestruck? The shiny disco eagle flying over the flaccid flag don't help matters either. This seems like the lazy man's tribute to America. It's like they used mad libs or magnetic poetry to generate the premise for this. This is the collectible equivalent of some 8-year-old's rush job done five minutes before class after spending the weekend with Super Mario. United We Stand? Last time I checked those towers weren't standing. Thanks for rubbing it in, Bradford Exchange. 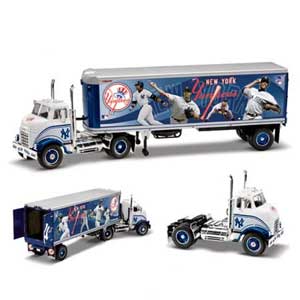 New York Yankees Super Semi Diecast Truck
On the surface this might not look like anything out of the ordinary, but take a deeper look. What does an old fashioned truck have to do with the modern New York Yankees? Do the Yankees travel from game to game in the back of this truck? No, they do not. They each own private planes and they fly to and from their own private airports, because they are rich athletes. An old fashioned truck such as this is of no interest to them unless it is full of naked women and/or steroids. At best it is a harrowing anachronism destabilizing our timeline, at worst it is the biggest waste of $139 in the free world. Now if this son of a bitch transformed into a giant robotic New York Yankee, then we'd be talking. 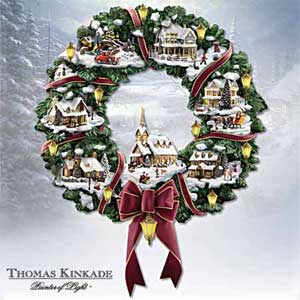 Remember, it is not too late to stuff some stockings with sharp, jagged eagle figurines and light-up paintings of Evel Knievel. Make Christmas special by giving your loved ones something truly special!