Bwahaha... either I'm particularly out of touch with reality, or a certain segment of online gamers are. Prepare to weep your eyes out once you've read "Marriage in MMORPG's", the brainchild article of somebody who apparently got on the bad side of the editor at CG Online.

Nestled comfortably within the warmth of their home and fuzzy slippers, individuals can meet, talk intimately, and unofficially marry other cybersouls without ever having to change their clothes. But marriage is not just limited to textual environments or romantic chat worlds; binding relationships can also be found in on-line role-playing games.

Yes, NOTHING SETS THE MOOD FOR "ROMANCE" QUITE LIKE HITTING POLYGONAL BATS WITH CLUBS!

Falling in love in a role-playing environment is not inconceivable. You are playing a character that is engaged in high-risk combat situations, often in the company of your guild or a group of friends. You have an adrenaline rush with each success and the chivalric assistance of others in times of failure.

Oh yeah, sure, I can just picture it now:

MALE WARRIOR: "I am sure glad I was able to save you from that train of vicious fire beetles, Albamarra'argarita."
ALBAMARRA'ARGARITA: (digitally wiping the sweat off her pixellated brow) "Yes, just in the nick of time. Your chivalry has made my loins wet with desire. Let us engage in sexual intercourse by running into each other repeatedly."
MALE WARRIOR: (roleplaying) "Thine forsooth hath doth hailed yon mighty Volvo!!!"

When people log into their server, they find themselves engaged in their fantasy world for three or four hours at a time.

Many never leave this fantasy world, even after logging out of the game!

Considering that some dates in the real world do not last that long, it is no wonder that individuals bond and fall in love with the pixelated persona who just saved them from an horde of goblins.

Real world relationships don't last that long for the same reasons as well: hordes of goblins.

As one man stated, he married his partner in the game because he felt that she was always there for him.

MALE WARRIOR: "Do you have the 400 platinum I gave you?"
ALBAMARRA'ARGARITA: "Yes I do."
MALE WARRIOR: (reflective and emotional) "You are truly always here for me."

Romance is in the air!

A woman stated that she thought that her role-playing husband was more attentive to things of interest to her than most of her real world friends.

She must hang out with some real winners. Being hit for 83 points of damage isn't really hard to miss.

In both cases, the parties felt that their on-line partners fulfilled their needs better than a potential real world companion.

MALE WARRIOR: "I NEED SOMEBODY TO JOIN MY PARTY SO I CAN GO GET LOST IN LOWER GUK!"
ALBAMARRA'ARGARITA: "I'll join you, dear!"
MALE WARRIOR: "You fulfill my needs much better than the drunk lady outside my apartment door, who is currently banging a glass bottle against her head and urinating on my welcome mat. My mother always gets so unruly when she's been drinking."

On second thought, the welcome mat is fairly unnecessary... who would visit?

At least this partner understood why one would stay up until 4:00AM trying to finish a quest while a non-gamer might consider it ludicrous to endure such sleep deprivation.

Hooray! Finally a place for SCREWED UP PSYCHOPATHS to meet and lose all sense of reality together! I'm a strong, muscular Barbarian looking for hot sex with Wood Elves!

Given this, it can become an epic quest for any male seeking female companionship since there are approximately 1500 individuals on a server during peak hours.

Haha, GOOD LUCK, GENTS! I sure hope you can find love behind a magic shield! No really, I wish you the best in finding love inside a VIDEO GAME. Maybe Verant could make finding true love a quest! Yeah, and then you could be rewarded by being given a MAGIC BELT OF +5 INCHES TO MANHOOD.

Through informal surveys done on official and non-official boards, while most women said they played female characters, there were also many men who admitted playing females as well . This suggests that when a intrepid traveler waiting outside of Heartbreak Hotel spies an adorable Elf in extremely interesting leather armor, there is no guarantee that on the other end of the keyboard, said female character in question is governed by an equally romantically interested female.

Others admitted that they enjoyed the attention, and found that when playing female characters, they received more gifts of armor, weapons, and interesting items than when they played male personas.

Gee, how unlikely and odd! Male characters twinking supposedly female characters? That's so far out of the realm of possibility!

Have some individuals lost their spouses to other members of their guild or to an über-level warrior? According to the forums, yes. McDaniel verified that EverQuest has received complaints from spouses not only regarding the addictive qualities of the game, but also the damage to real world relationships the game is allegedly responsible for.

Both parties are probably better off. If you're married to somebody who is addicted to an online RPG, you need to get OUT of that relationship as soon as possible. It could end up being more damaging than them coming home and beating you with a waffle iron every day.

And as more and more women become computer savvy, men can look forward to increased chances of finding their own true love while engaging in their favorite pastime. Even the most isolated computer gamer may soon be enjoying the fruits of another's affections.

Game Review! Feast your bloodshot eyes on Raising Dead, one of the worst first-person shooters I've since Thundra. 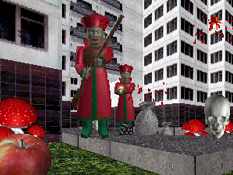 Since the engine this game runs on was manufactured during the Truman administration, controlling your character is about as easy as shoving a convenience store through Kate Moss' vulva. When playing through Raising Dead, be sure to never let any enemies get behind you, because it takes a good half an hour to turn all the way around so you may kill them. Of course, if you're being molested by a barking skull, you'll also have to back up a few hundred yards so you can hit it as well. When enemies get within a certain radius of you, they become impossible to hit... just like real life!

It's real bad, folks... and you can download the shareware version of the game as well! Check out da review.

ROM Pit Review! Are you ready for blatant racism? If so, Square's Tom Sawyer for the NES will undoubtedly make you feel like you're walking a Klan episode of Jerry Springer!

There's a black kid running around sweeping the dirt with a straw broom. Yes, he's actually trying to sweep dirt off of the dirt road. If you can catch him (as soon as you get close, he rockets off the side of the screen, so you have to corner him somehow), you get to talk to him and he'll join your party. Here is where the bulk of the racism comes in. This is the most obscene caricature of a black person I have ever seen (see above screenshot). He has pitch black skin, a bright orange afro, tiny beady white dots for eyes, and GIANT RED AND ORANGE STRIPED LIPS THAT FILL UP 2/3 OF HIS FACE. Apparently there are no black people in all of Japan and they don't get the UPN Network over there, so they have to get their information from old editorial cartoons in one of the newspapers Commodore Perry brought back with him in the 1860's.

Amazing how a game like this could exist... see it and believe it for yourself!