You Can't Save the Youth Center

I've taken the liberty of listing the most unjust moments of my land developing career just so you know where I'm coming from. The next time some fat kid wailing about losing someplace to "hang with his buds" tries to charm you into fueling his PCP habit with something called a "Truffle Shuffle," punch that little asshole in the face for me. 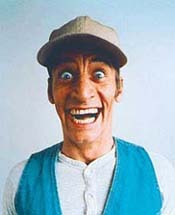 This man is a criminal.July 1987 - Crowley Construction, Ltd. buys out a run-down summer camp that had been closed by the state of Tennessee for rampant sexual abuse by camp counselors and for having the largest concentration of the West Nile Virus in the United States known as Percolation Pond. Little did we know, the lead pedophile--some grinning idiot wrapped in denim with a whiskey-cured voice--had led his poor, Stockholm Syndrome-suffering victims in an attack against our construction equipment. The boys thought it was really cute when they dropped baby turtles on us, but when that maniac started launching toilets full of plastic explosives, I called the fucking cops.

By the time they show up, eight of my men are dead, but he's still able to win them over with that "Knowwhutimean" bullshit. While the police are escorting me away, some of his cult light my pants on fire and dump creamed corn on my head.

I spend the next 100 hours of my life picking up trash on the side of the highway. 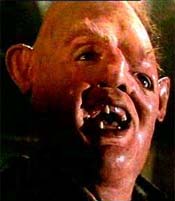 This man is a criminal.April 1985 - My land-sniffing senses take me to Oregon, where the purchase of a run-down hovel full of psychotic children promises to bring the Krispy Kreme the citizens of Astoria had been craving for decade. One word of advice: never agree to have the deed handed over to you on a beach minutes before the previous owner's right expire. Because I'm just standing there, sand filling my Italian loafers, when a goddamned pirate ship sails out of the cove. Then some ape-strong asymmetric retard in an ill--fitting t-shirt picks me up and throws me 30 feet. I guess everyone thinks it's legal to hit us now? Anyway, I land on a sharp piece of driftwood, break one of my hips, and end up paying for it out of my own pocket because my insurance policy doesn't cover being thrown. 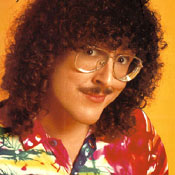 This man is a criminal.August 1989 - Hey, fellow land developers: never go to the fund raiser for the thing you're trying to shut down! Boy did I learn that the hard way. I feel pretty stupid in retrospect, but irony was pretty new and I wanted to try it out.

Anyway, this incident began when a TV station in Utah began showing hardcore pornography during the afternoon and was quickly shut down by the FCC. The ringleader behind all of this smut was a poodle-haired morning DJ and a registered sexual offender who took exposing himself to children to a whole new level. We quickly bought up the land but--you guessed it--not before a last minute fundraiser could be held. I know a lot about real estate law, but for some reason no one has ever been able to tell me how the simple act of gathering money is somehow able to cancel a business transaction.

So the idiot pulls me up on stage, humiliates me via the art of song parody, and, in an elaborate prank, fills my Cadillac with silly string and pushes it into a nearby river. My chocolate lab was in the back seat.

To this day that dog-murdering son of a bitch remains the most wealthy pervert in Utah.

February 1992 - AKA "The Great Roller Disco Debacle." Those kids had knives. They can keep their goddamned roller disco.