That techno Mortal Kombat song is released, creating a ripple effect throughout the multiverse. The old gods of several realms are awakened. Their vast minds set to work, orchestrating events over thousands of years to culminate in their ultimate goal: Getting violent people to fist fight one another. 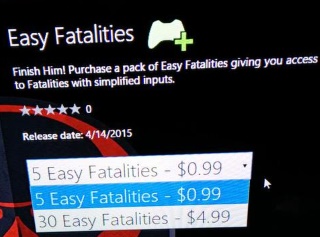 The Continental Congress ratifies the Articles of Confederation.

Cassie Cage is conceived when Johnny Cage and Sonya Blade make love. This is portrayed by a passenger train entering a tunnel. At the moment of climax the train derails and flips upside down. A slow motion x-ray shot lingers as the train's backbone snaps into a thousand bone shards and its liver bursts.

Jason from Friday the 13th and Predator from Predator (as well as Predators) discover that their brands have been sufficiently devalued, allowing them to appear as licensed characters in a fighting game set in someone else's universe.

Cyber Cyborg comes up with a hilarious new fatality that, for a change, wasn't stolen from the last season of the Spartacus tv series. After he defeats his opponent, Cyber Cyborg shoots them in the face for fifteen minutes, his bored expression never changing. It's extra funny because one shot would have been enough to kill someone, so every additional bullet makes everyone laugh even harder. This violence is so over the top. It really makes you wonder what they'll think up next.

Raiden encounters the Temple of No Dragon At All, where he discovers a dragon. With the force of the Earth 3 USAF Soldier Squad they use a time portal to banish the dragon to Probably Never Coming Back Best Not to Think About It Realm. This angers a bee god, which in turn begins the Scorpion Clone Wars.

At this point everyone pauses, looks at one another, and wonders if they'd be better off in World of Warcraft's story.

Everyone becomes a ninja. With robot fists. And a gun.

To facilitate more fighting, the governing bodies of Earth Realm, Outworld, and Netherrealm coordinate in an effort to create more enticing battle arenas. Citizens are encouraged to carve skulls into monuments, reduce buildings to rubble with cool flames and smoke, erect spikes wherever possible, and litter corpses everywhere.

Quan'Qzi, metalord of the Multiverse, grand overseer of the lizard ninja army, techpriest of the elusive holo-assassins, frowns. Before him is an ancient tome. Its pages are yellowed and crumbling, its ink faded like the blood of a demon monk being absorbed by the sand of a battle arena. But the words are still legible. The embossed cover still bears its title: Dictionary

His frown deepens as he re-reads the passage. It's not the definition of the word that concerns him. It's the spelling. Combat. With a "c".