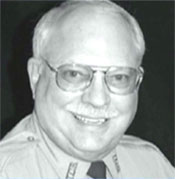 Hi, I'm Robert Bates. I never thought I'd kill a man in cold blood, but look at me now!Attention male seniors, ages 65 and up: Are you sick of whiling away your Golden Years, scratching lotto tickets and struggling to remember whether or not the two-hour anecdote you're telling the grandkids is from real life or a rerun of The Danny Thomas Show? The Tulsa Police Department understands staying active is key to maintaining well-being during old age, and we regret to inform you the health benefits of feeding ducks down by the lily pond have been greatly exaggerated by our city's parks and recreation department. If anything, those ducks are responsible for several salmonella-based deaths within Tulsa's senior community.

Before you resign yourself to a quiet existence of informing everyone within earshot how much things used to cost, know that we're here to provide a better way. Instead of spending your life savings on fad blood pressure medications and costly inheritances, have you considered making a monthly donation to your friends at the Tulsa Police Department? It's not just tax-deductible; if your generosity meets a certain threshold, we'll bring you along as an honorary officer who isn't bound by the same rules and regulations that often make our work so inefficient. And if you happen to accidentally kill someone, we only ask that you act the same way you do when you're caught shoplifting: Pretend that you don't even know where you are, and start asking people if they're your grandson.

Sound interesting? Then grab your large-print checkbook and discover how you can help keep your community's wealthy property owners safe.

Even if you don't have much to give, Tulsa has plenty of excitement to offer seniors on a budget. Donors to our "Little Cowboy" tier will be driven through some of our city's most dangerous neighborhoods in a vehicle not unlike the Popemobile. But there's something more to our urban safari: This means of transportation is also equipped with a tennis ball cannon--bought wholesale from the set of TV's American Gladiators--that can deliver surprising-but-not-lethal projectile attacks to anyone within a 100-yard radius. You'll be tasked with opening fire on anyone who looks like a suspected gang member, and thanks to some clever rewrites of police brutality laws, what many would view as an abuse of power now falls squarely within the realm of legality. Will these fuzzy balls of justice set young teens on the right path, or merely knock out some of their inessential teeth? Find out for only $500 a month.

If you'd like a more hands-on police experience, the $1000 tier is the place to be. For this relatively negligible cost, you'll get to ride along with us for 8 full hours, responding to calls and providing backup like a true boy in blue. You won't be wandering into danger unprotected, though: All donors to this tier will be equipped with a Kevlar vest--one too expensive for our brave, fighting men overseas--as well as as your choice of one of the many firearms collecting dust in our evidence room. And just to spice things up, we'll provide you with a non-lethal taser shaped exactly like our standard-issue handguns! In the heat of the moment, will you choose the right one? Only $1000 donors will know for sure! But please, keep in mind these weapons are only to be used in cases where your life is in danger, like when an unarmed suspect is fleeing in broad daylight. And if you're ever called to testify to in court, you must vow to never acknowledge what you read here.

There's a new sheriff in town--and it's you! Team up with one of our elite drug enforcement squads as we raid whatever looks like a crackhouse. In accordance with our deal approved by the American Gladiators prop warehouse people, we'll provide you with an AtlasSphere outfitted with bulletproof glass for protection. Inside, you'll be completely safe from stray bullets and laws prohibiting excessive force! Roll over dangerous pets, threatening children, and the few meager possessions of the poor in search for the ultimate treasure: Justice! But should you stumble upon any other valuable urban goods in our continued war on drugs, always remember the Tulsa Police Department motto: We finds what we keeps. Disclaimer: Since the AtlasSphere requires a great deal physical effort to move, we'll need a note from your doctor, or, at the very least, his verbal assurance that you won't immediately die within its steel confines.

Let's face facts: We've all wanted to end someone's life. And now you can do it in full accordance with our justice system! Donating $2000 a month will make you first in line for any state execution, where you'll personally deliver our special drug cocktail to the condemned, intravenously. Worried that your shaky hands might cause you to miss the vein? Well, we're happy to tell you that once someone is strapped down in that bed, no amount of needle-based injuries could possibly be considered cruel or unusual. Anyone with experience can tell you there's nothing like the death rattle of a man still possible of rehabilitation--if your pockets are deep enough, you can be there to experience it first-hand! Watch our great court system play out to its logical conclusion as a mix of poisons seizes up the heart of someone who once had promise and a future! Witness widows grieving, and victims' families realize that revenge is ultimately fruitless. Peer into the unbridled futility of life itself weeks before death stamps your ticket to the great beyond. But please, no flash photography.