Rule Changes For The 2009 NFL Season 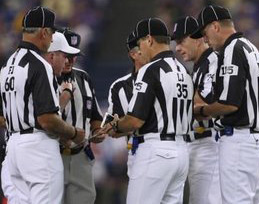 Another season of NFL football has arrived, bringing with it the promise of brisk Fall air and angry e-mails from people who are deeply offended by sports being mentioned on the front page.

With the most popular and profitable sports league in the United States on its hands, the NFL usually introduces a few minor rule changes every year in an effort to keep from tinkering with a good thing. Not this year. The official rulebook has doubled in size, introducing a slew of new rules and modifying or downright contradicting many policies that have been in place since the league's formation.

These are a few of the more peculiar additions. I'm sure there are many more worth mentioning, but the press has only been able to parse and report on a small fraction of the rule changes.

After every play, all 22 players on the field have exactly fifteen seconds to flex, pose, and thump their chests to demonstrate that they are all the best athlete in the entire world

If a player brings a cupcake to the game, he must bring enough cupcakes for everyone

A fifth quarter has been added to each game, with the third quarter having been removed to make room for it

Quarterbacks can only run diagonally, defensive linemen can only run in a line that's perpendicular or horizontal to the line of scrimmage, and whites are not allowed to play at the running back position 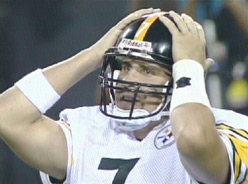 In order to establish possession, a wide receiver must bring the ball to his body without losing control, touch both of his feet in the field of play, and go through a bitter court battle with the ball's previous owner

No running near the pool

Members of the coaching staff are not allowed to steal play call signals from the opposing team, nor are they allowed to dive and intercept kisses that were clearly blown toward someone else

In the event that an athlete dies on the field, the play will effectively be ruled as a "do-over" and his surviving family will be evenly distributed to the rest of his teammates upon the conclusion of the game

Touchdowns are now worth five points, uncanny impersonations of Jack Nicholson are worth eight

When the ball is fumbled and like twenty guys are crammed in a pile fighting over it, ten points will be awarded if a player manages to sneak out with the ball and casually clean his fingertips while everyone keeps fighting

During night games, the points are doubled and the uniforms are skimpier

After 140 years of careful consideration, we have finally made our decision: All employees of the NFL are urged to vote for Ulysses S. Grant in the presidential election