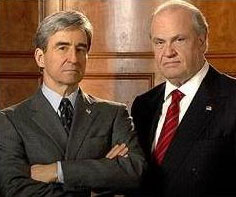 Now we know that we have challenges. There are caves full of bats out there and a league of vampires ready to chase us out of our homes the minute we let our guard down. That's why we need a strong leader, one unafraid to tackle the challenges of the 20th century with grit, wisdom, and, when no other option remains, military force.

That man is John McCain. Folks, I'd like to tell you the remarkable story of John McCain, a man who has served this country like no other.

When his Vietnamese captors hung him upside-down by his ankles and spun him around until he was really dizzy, John McCain did not give in. Instead he learned to harness those centrifugal forces to mix cement in his stomach. At night, while his captors slept, he would evacuate that cement and use it to reinforce the foundation of his tiny, filthy cage.

That cage was his home for five years, but it wasn't where his heart was. The Vietcong poked and prodded him, I understand. They deprived him of sleep, water, and human contact. When he did manage to sleep, it was on a giant pile of waste. He was hounded incessantly by gigantic ants the size of Tennessee golf balls and drifted in and out of consciousness.

I'm told they even got a really large Vietcong to eat a big thing of chili and then belch into a jar. Folks, they forced John McCain to open that jar and it was like that one really fat VC belched right in his face.

They tried everything to break this man. When they forced him to marry a goat, he said his vows proudly and made a loving husband. When they later killed that goat in front of him, he laughed because his heart could never truly love a goat.

The Vietnamese had a name for him. They called him John McCain, which is also what we call him.

During his time in captivity, John McCain did not betray America, though he did give up the names of the Green Bay Packers. Later on, after the entire team was crushed beneath an avalanche of logs that rolled down a hill, John McCain blamed himself. To the surprise of his captors, he decided then and there to stay a POW longer, to serve out a self-imposed sentence on behalf of America and the National Football League.

They tortured him endlessly. They would rub poison ivy on him, then put a cone around his neck so that as much as he wanted to and as bad as it itched, he could not gnaw on his rump for relief. Once they got together and peed in a jug, then left that jug in a place where John McCain would trip over it and get urine on his pant legs. John McCain endured, rump itching and legs stained with urine, because he knew no other way as an American.

Later when they convinced John McCain that every Vietcong had the power to manifest a giant demon twin, he was careful not to anger any of them. He did what he was told, as long as he was not asked to give up vital American secrets. They got that same fat VC from earlier to dress up like a demon, and then they made it look like he popped out from behind a smaller VC. When that big fake demon twin hollered and chased John McCain around, he gave up in his pants, but he did not give up on America.