A Funeral for a Friend 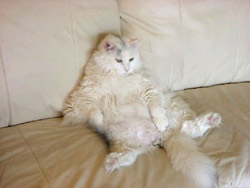 My neighbor, Kafir, stopped by my house on Tuesday to invite me to attend a funeral. Kafir is a college student with wealthy relatives in the Middle East who has decided to embrace Americanism and live a surreal suburban life. I also consider him a friend, although I don't consider myself the sort of friend he should be inviting to a funeral.

"Tragic loss of family member," Kafir said to me sadly. "I cannot recover this."

He looked shaken. Haunted even.

"Who was it?" I asked with sympathy.

One of them is an extremely fat white cat Kafir has named "Missus Marple" after the Agatha Christie character. Rather than solving mysteries it seems to spend most of its time licking its genitals and anus while sprawled on Kafir's glass kitchen table. This, coupled with Kafir's habit of cutting fresh apricots on the table's surface, has forced me to refuse courtesy fruit slices several times.

Kafir's other pet was Donovan, a large black scorpion. The scorpion smelled bad and had a body covered with armored plates so large they were textured. It was as if they had been bump-mapped.

The second time I visited Kafir he tried to get me to hold Donovan. I don't really feel comfortable holding a benign giant bug like a lobster or a crab, let alone some sort of evil black-shelled monster from hell like Donovan. Kafir was persistent.

"He so friendly," Kafir explained in a sing-songy voice. "He loves to be pet."

I was on the brink of succumbing to peer pressure when I asked, "Does he sting?"

Kafir sucked in a hissing breath through his teeth and squinted at me.

"Ehhhhh," Kafir said, his head wobbling from side to side, "a little. A little bit. No poison. It's just like a wasp." 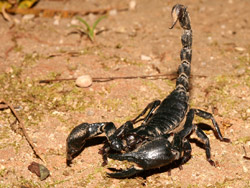 This was before Kafir and I challenged a wasp's nest together.

"Yes, this is a good point," he agreed. "Okay, but promise you will pet him someday soon."

I promised and here was Kafir, at my door and insisting I live up to my end of the deal by attending the open casket funeral of his beloved Donovan.

"I will miss him so very terrible," Kafir said, his eyes welling with emotion. "

"Alright, Kafir," I patted him on the shoulder. "I will be there."

Kafir hugged me before departing. I have to admit, I could not fault Kafir for loving his scorpion. When I was younger I had a fish tank and I gave a small crab named Oscar something approaching love. When the asshole fish that lived in the tank ate Oscar's big pincer I separated that stupid crab and I fed Oscar by hand every day. I did not like holding him, but I did it because I cared about the crab.

I know Oscar didn't reciprocate. I'm sure if he was 20 feet tall he would be pulling my ribcage apart with his feeding mandibles, but it is human nature to become attached to anything that is dependent on us.

Wednesday evening I walked down my block to Kafir's house. His mailbox and entryway were hung with black bunting. When I rang the doorbell I was greeted by Kafir, dressed head-to-toe in black. He handed me a black armband.