Night of the Living Mr. Rogers

Lowtax: "I heard you like to read, Mr. 'Reading Time.' I hear you've had a torrid lifelong affair with the written word."

Garbage Day: "Yes, you have named an activity that I enjoy. I've spent many the lonely night with the printed page."

Lowtax: "Well, have I got a book for you, book-fucker! It requires your keen critical eye. Review it at once!" 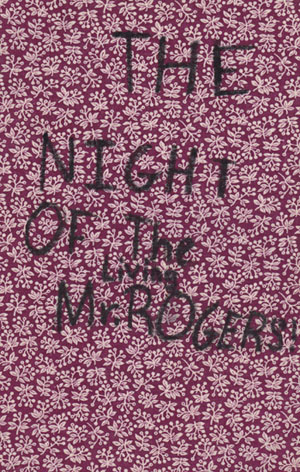 The book Rich gave me was coincidentally written by someone named "Richard Kyanka." I say "coincidentally" because even with his assurances regarding the authenticity of this obscure early work, I can't believe the "Richard Kyanka" that scribbled these deranged ravings could have evolved into a functional adult. If fans of Rich's more recent writing find The Night of the Living Mr. Rogers on eBay, they might be tempted to buy it, but I recommend that they regard it as non-canonical, so as to avoid the tragic incoherence of his youthful lunacy. 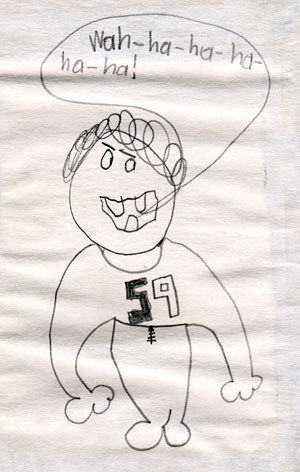 Judging by the jersey number, the facial features and Rich's known rooting interests, the opening image depicts former Chiefs linebacker Percy Snow, whose career ended after one season due to a MOPED ACCIDENT. He's laughing because he got to keep his signing bonus.

It seems odd that the Chiefs' scouts didn't notice Percy Snow's freakish Dickbutt limbs, but maybe that's the kind of carelessness that led to them all being fired yesterday. Percy Snow doesn't actually appear in the story to follow, the first of many crushing disappointments this book delivers. 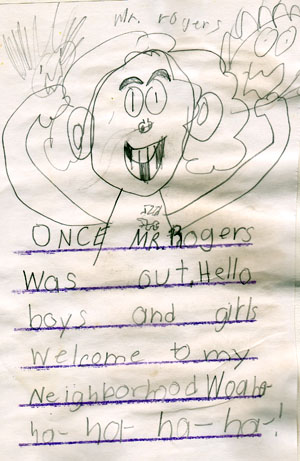 On television, Mr. Rogers was surrounded by a colorful menagerie, from Henrietta Pussycat to Purple Panda. Rich makes Mr. Rogers himself animalistic, with feline eyes, a swine-flu snout, and hockey-beaver teeth. Less explicably, he wears headphones and a womanly wig while brandishing decapitated heads. What's his motivation for the cross-dressing, dismemberment and cross-species transmutation? This pedestrian introduction offers few answers. 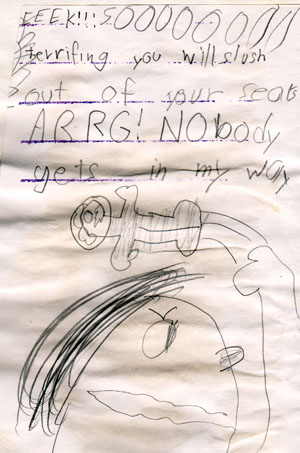 I assume "you will slush out of your seat" means "you will become so frightened that involuntary diarrhea will flood your pants, creating a slip-and-slide effect that dislodges you from your chair." Rich must have started watching shitty movies at an early age, because this phrase confirms he was already fluent in "crazy predictions about viewer reactions from the back of ridiculous VHS tapes." Mercifully, instead of graphically illustrating this disgusting concept, Rich drew a potato-headed cyclops tossing a space-helmeted salamander.