Night of the Living Mr. Rogers 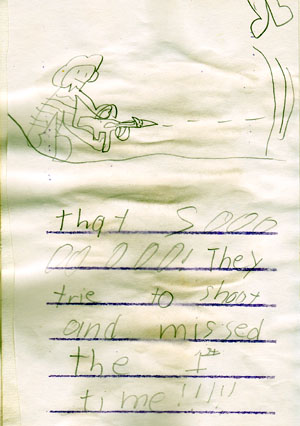 What the fuck is "that soooooooo!" supposed to mean? That inscrutable fragment, unconscionably capitalized and punctuated, demonstrates juvenile-delinquent Rich's violent disregard for the English language. He was a pre-pubescent grammatical sociopath. Also, is that a gun in a child's school assignment? If a young lad drew this today, he'd be accused of destroying America's innocence and locked up in a re-education camp, alongside any other grade-school subversives who write about subjects other than patriotism and butterflies.

The next page begins "Mr. Rogor is at large." Either Rich is randomly introducing a new villain, or he has misspelled the name of the title character, an unforgivable gaffe! "Ok," the pictureless page continues, "this mean civil neclear world war III ZAP pang Ding Bo oo ooom! " He's just filling space with onomotopoeiac blather! Such blatant disregard -- utter contempt, really -- for the reader, who has already put up with so much nonsense. 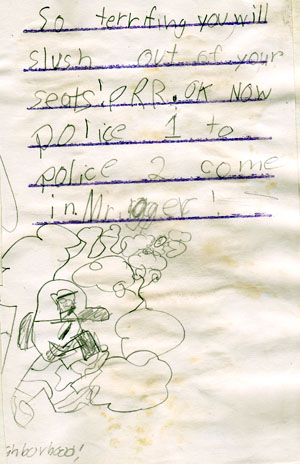 "Slush out of your seats" -- now he's just repeating himself. And to think this man would later crusade against the overuse of catch phrases. Oh, the hypocrisy! When confronted with this damning evidence, Rich pled ignorance (or unwittingly confirmed that he wasn't the real author, proving my "coincidence" theory correct): 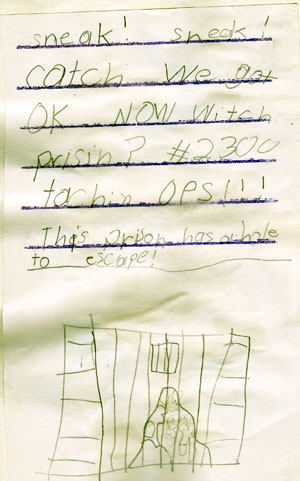 RIch seemingly introduces the intriguing concept of "Witch Prisin," but it's just another galling spelling error, and no sorceresses come into play. This shameless sequel-baiting ending left the door open for future installments, but fortunately for both the literary world and the sainted Mr. Rogers' beleaguered corpse, they never materialized.

The Night of the Living Mr. Rogers might have some value -- indeed, I think it's already popular on the child-therapist circuit, where it's used as a self-contained encyclopedia of psychotic-kid disorders -- but it contains absolutely no artistic merit. I'm pretty sure Rich should have chucked it in the incinerator and listened to the flames scream with pain as they absorbed its idiotic words, rather than subjecting it to a public critique.

Lowtax: "You butt! What the hell is this crap? I thought you liked books. You're fired!"

Garbage Day: "But... but I was just doing my part to sustain Something Awful's reputation as the last bastion of truthful criticism and unflinching journalistic integrity!"

Lowtax: "I have another surprise for you. It was I who escaped from Prison #2300. I've been Mr. Rogers all along!"

Garbage Day: "What the heavens? You're transforming! Those eyes, that nose, those teeth, that womanly wig!"

Lowtax: "That book contained my soul. By reviewing it on the INTERNET, you've unleashed the ultimate evil!"

Garbage Day: "that soooooooo!" *slushes out of his seat*