So, married? Boyfriend? Kids? What's the story? No, not like that, just getting to know you. Oh, married? Yeah, that's great. I can't say I envy you, though. I was married for a while, but that's over. No kids, though.

Oh! Yeah, no, I've got the one kid. Great kid. He's gonna be smart, like his dad. I'm a great dad, never missed a birthday. I spoil that kid rotten on his birthdays. Power Wheels, Nintendo, plasma TV, all that stuff. My ex is like "you're buying him too much stuff, he's too young, he doesn't need all this stuff," but I'm like, don't tell me what your kid needs. For instance, this year I bought him this great little .22 rifle, and his mom throws a hissy fit. She's like "he's only three, he's gonna kill someone with this thing," but I'm like, listen, the kid's gotta be, pardon my French, but the kid's gotta be a fucking deadeye to kill someone with a little .22. This year I was gonna get him a crossbow, let's see him kill someone with that. I bet he can't even pull the string back. 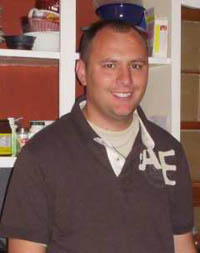 Yeah, marriage. Whew, what a trip. Don't know if I'll go down that road again. I love ladies though. I guess I don't really have a type. I don't really see "races," I guess. White women, black chicks, Asian, Hispanic, married women, whatever. It's all good, right? I mean, I love just going out there and bird-doggin', but who knows, maybe I'm ready for a relationship. I've had a few bad experiences, but hey, who hasn't. This last chick I dated, man, I tell you, bitch from hell. I guess you could say I'm an old-fashioned guy, love walks on the beach, I hold doors open, all that stuff.

Maybe I'm chivalrous to a fault, and I guess she couldn't handle that. I'd open the car door, pull her chair out for her, whatever, and she'd just look at me like I shit in her milkshake or something, pardon the French. And I guess the last straw for her crazy ass was like, we were out at this real nice restaurant- because when I take a lady out it's not going to be Applebees or whatever, we're talking $75 steaks here, no big deal. And I'm just being a gentleman, right, so the waiter comes and I'm like, yeah, the lady will have a ribeye, medium rare, and she just freaks out, saying I have no right to tell her what she'll order. Uh, hello? I'm being nice? You crazy bitch? Yeah, I guess nice guys finish last.

So what are you doing later?

So yeah, here's my card. This is my private cell, by the way. Only like three people have this. I know some people who would pay a lot for that number, so keep it safe, OK? And if you ever need anything, or just need to talk, whatever, day or night, you just give me a call.

Warm apologies to whatever random guy I used for the photos.