When Bruce Gibson's "Cracked Copy" was released in 1986 it received both critical acclaim and best-seller status. Critics said the book captured the pulse-pounding adrenaline of William Gibson's "Neuromancer", the cultural nuance of George Alec Effinger's "When Gravity Fails", and the esoteric detail of Bruce Sterling's "Hardwired". It was the pinnacle of cyberpunk fiction, yet this story has been all but forgotten by the mainstream of science fiction. To help preserve its legacy we are pleased to present the first chapter. 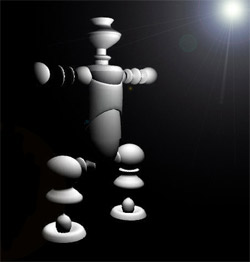 By the time he was nearly done with the meal Case felt full. The fullness brought with it a sense of guilt. Case knew the nachos were an extravagance he could ill-afford. It had been a while since work had come Case's way. He finished the last bite of his food just as he reached his apartment building.

With the nacho cheese still pumping through his carotid he surveyed the parking situation. There was a space open right out front, but he lacked the confidence to successfully parallel park the Town & Country. After three attempts he aborted the maneuver and parked two blocks away.

When he entered his basement studio apartment he noticed an episode of Family Guy was left on pause on the TV screen. He briefly considered the possibility that a team of the MPAA's jackbooted thugs had stormed his apartment to verify that his DVDs were legit. Then he remembered he had been watching it before he left.

Lucky for him, the video wasn't a DVD at all. He was streaming it from his media PC.

"You'll have to try a little harder than that to tighten the noose around me, Glickman," Case said aloud to his half-painted Tau army.

If Glickman's thugs started breathing down his neck Case would be gone faster than vandalism on the Wikipedia entry for Shigeru Miyamoto.

Case laughed and settled into his computer chair. There was a message waiting for him on his Dell XPS. It was something from H. Nakamura, a previous employer.

"Case Logic, Adobe is auditing us & wants your licents info for Photoshp," the burning black characters scrolled up the screen as he read. "Told them u did the design for the shopping cart buttons. Need to get that from you ASAP."

Case snorted derisively. A Photoshop license? That was Nakamura's problem, Case was just a hired gun working the razor's edge. Then he scrolled down and read the end of the message.

"Get that 2 me and we can talk about a new job. Need a logo redesign."

After all the low-paying milk runs for Nakamura they were entrusting him with heavy-hitter work. Logo redesigns were the gateway to entire branding packages, and a great source of continued income. The tricky part would be coming up with a legit license for Photoshop that would send the black suits from Adobe packing.

"I'll have to put a team together," Case said to the greasy girl on his Masamune Shirow poster.

With a flourish of the keyboard and a series of adroit mouse clicks Case opened Outlook Contacts and began to review the profiles of other datajackers he had worked with in the past. This rogue's gallery was his black book of the hottest and wildest data-chefs and keyboard-sorcerers on the whole info pipe.