Me and that Falcon

Garage sales are an almost universally pitiful enterprise. Most often they feature the things nobody wants to own that, tragically, nobody wants to buy. So you go and look for the least terrible item and try to barter its price down so you can feel like you robbed some idiot of his most precious belonging, which you yourself will one day be robbed of in turn when you host your own garage sale. I knew this when I set out Saturday morning to hit up some local garage sales. I can't quite say why I decided to do this, just that some great force from beyond compelled me to. When confronted with such powerful forces, one cannot turn away.

The first garage sale I went to was pretty conventional. There were flimsy card tables lining a driveway, each covered with various broken appliances and random knickknacks. The occasional vase, the random wicker basket, the clock radios from the 1980s, all the old standards were there. I looked at everything, though I wanted nothing. These were not the bargains I was searching for. They were not even close.

I sighed with disappointment. Why had I bothered with any of this? Was I to find some meaning buying the scraps and rubbish of other people? No, I'm not like that. I stood there clutching a clock radio with anger, examining it like it was a piece of shrapnel plucked from my heart.

"As soon as I finish glaring at this piece of crap," I said to myself, "I'm going to get in my car and go home."

Just then a sudden, powerful wind swept down from the sky, not unlike a mighty gale that blows through a valley. I let the wind carry me with it, tilting my head in the direction it traveled. This was no mere wind. It was the heavy breath of fate. Suddenly everything came into focus and I knew why I was there. 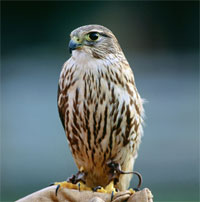 There were two rows of tables lining this driveway, with a great sea of concrete in the middle. I hadn't noticed at first, but that open area was a pathway leading from the street to destiny. There at the base of the closed garage door sat a man of imposing stature. From his lawn chair throne he observed all things with a gaze as fixed and inflexible as the strongest metal. Beside him was a perch, and on that perch rested a mighty falcon. It was a beautiful, majestic bird unlike any I had ever before seen.

The fingers of my hands turned to fluid, and the clock radio slipped out and returned to its rightful place of shame amongst all the other garbage populating the card tables. At this point my eyes were two metallic spheres, and the falcon itself was an extraordinarily disguised magnet of incredible power. I could not turn away.

I had never owned a falcon before, let alone conceived of owning one. But just seeing that falcon filled my head with a million ideas. Owning a falcon would literally change my life in almost indescribable ways. All the things I do now would be new and different with a falcon in hand, and entirely new avenues of living and adventuring would open up instantly.

Even something as simple as going to the park would be a wholly transformed endeavor. Other people would be tossing there little Frisbees back in forth, like that means something, and I would come in with my falcon and just blow their minds.

"Now, Darion!" I would yell, sending my faithful winged companion to swoop in and steal the Frisbee in mid air. Those guys would never see it coming. Sure, I'd toss the Frisbee back to them, but I'd get to say something cocky like, "Sorry, my falcon is just too damn good." If it were possible to high five a bird, that would be the point where me and the falcon high five each other.