Thursday, Dec 23, 2004 by Zack "Geist Editor" Parsons (@sexyfacts4u)
This installment of Fashion SWAT, Dr. David Thorpe and Zack Parsons execute a precision raid on the prancing den of Italian fashion designer Etro. Is Etro a company? An idea? A man? A God? Find out, when we tackle his 19th century beard themed fashion show.

Dr. Thorpe:We here at Fashion SWAT realize that haute couture is supposed to be flamboyant, ridiculous, and thought-provoking. However, while this may explain the actions of fashion designers, it does little in the way of excusing them.

Zack:This time around we appear to be reviewing a collection of Lord of the Rings characters filtered through early 20th century London from beard-obsessed Italian fashion label Etro.

Dr. Thorpe:Yes, they recently released a collection of outfits so dazzlingly ridiuclous that we simply had to acknowledge them, for fear that others might perpetuate such horrors. 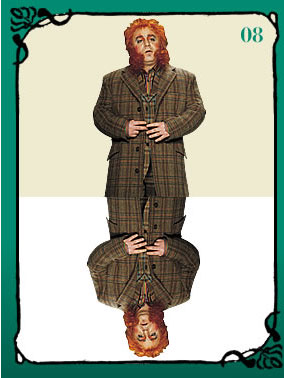 Zack:Etro is Italian for "beards".

Dr. Thorpe:That's really not so much a beard as it is a filthy horseshoe of red pubic hair surrounding the top of his head. Maybe that's what Etro means.

Zack:This hirsute chap is sporting an outfit coordinated to blend into his surroundings. He's like the Predator as long as his environment is a 1960's kitchen wallpaper collection with a grease fire roiling at head-height. He also appears to be throwing gang signs, no doubt to a collection of cockney accented miscreants.

Dr. Thorpe:To me, he looks more like he's displaying the smug countenance of the constabulary. "Dear me, I believe I've spotted some trouble in the park!" I wonder if this guy's girlfriend tells people she's dating a model. He looks like a playing card. The Jack of Plaids.

Zack:The mirror image only adds to how much this outfit terrifies me. It makes him look like some hairy two-headed Irish caterpillar that fell out of a Scotsman's kilt and rolled around in a puddle of whiskey. Just squealing "tut-tut" in this high-pitched drunken gnome voice.

Dr. Thorpe:Yeah, this cat definitely escaped from inside a pocelain statue on somebody's lawn.

Zack:He's a lawn golem. That pointed hat was like prison garb. He shivved the Guatemalan groundskeeper, ditched his pointed hat in an alleyway, and mugged a cartoon hobo for his clothes.

Dr. Thorpe:Imagine the day when Etro found him face-down in the gutter and said "hey, want to be a model?" He must have said "Oi, but I got sausage fingahs, guv'nah!"