Encounter With A Starving Pickup Artist

Oh geez, did I just bump into you with my trophy? I'm sorry, baby doll. This party's so crowded and the trophy is ever so splendid and ornate. I'd carry it over my head, but then my muscles would probably bulge out even farther. I'm not really sure how strong these walls are. Best not to risk it.

Go ahead, ask your question again.

Oh, the trophy. Funny you should ask! It's the Champion Of America trophy. I won it by being the Champion Of America. Yes, well, that's because it's not for a particular sport. I envy guys who can focus on one trivial child's game and throw themselves plug away for years until they eventually luck into winning with an entire team backing them up, but I'm more of a well-rounded individual. I'd rather have one trophy that encapsulates everything than a shelf full of Oscars and Super Bowl Trophies.

Yes, it certainly does look a bit like a bowling trophy with a #1 foam hand duct-taped to the top. Because that's exactly how I wanted it to look. I designed the trophy. It was one of many things that I won at to become the Champion.

The name's Chad, by the way. What's yours? Oh, no, I understand completely. Saying your name out loud in public is a risky proposition after 9/11, after all. I've got this wild DVD about the truth behind the "terrorist" attacks, you should come over to my place and see it some time. There's this one part that talks about how the jumpers were really just paid actors, it will blow your mind. You can put your feet up on the futon and I'll rub them for you. It will be great. 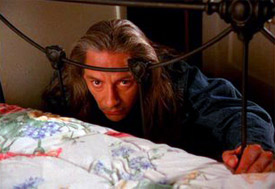 Boy, they sure are playing lots of music. Do you like music? Do you play any instruments? I'm not going to leave an opening for you to respond, but I play an instrument myself. I'm something of a virtuoso when it comes to classical guitar. Louie Louie, Smoke On The Water, Every Good Boy Does Fine - you name it and I can play the first couple of chords. The Philharmonic begged me to join them for a couple of years, but it's just not in my nature to follow, you know? I'm a lone wolf. Hence the shirt.

Yeah, you're probably right. The wolf is a little goofy. He's got regular old shades but he should have Oakleys, and instead of pulling them down just enough to look over the rims and raise one eyebrow the wolf should just be grinning. That would free up the left hand to give a second middle finger. That would really drive the point home.

Still, the shirt sums me up as best as a screen-printed piece of fabric can represent all that comprises a man's soul. I am a pretty complicated guy so I'd say it does about 80% of the job, at best.

Oh, by all means, don't let me keep you. We all have to go to the bathroom eventually. I'll stand just outside the door and hold it slightly ajar so you can still hear me.

As I was saying, I'm pretty complicated. There are many layers to a Chad potato, metaphorically speaking. There's the rugged skin. Attractive, sure, but not easily flayed with a potato peeler. Then you've got the inside, which is what most people consider the potato proper.

Hey, that faucet's been running for a while now. Is everything okay in there?

You came in through the door, sweet pea. Why are you leaving through the window? You must be seriously drunk. Don't worry, I'll keep a close eye on your for the rest of the party. No one's going to mess with you. If you need to vomit or cry, I'll hold your hair.

Did I mention I'm a member of Mensa? Not the one you're thinking of, but Siberian Mensa, which is WAY better.

In regular Mensa everyone is super uptight about shit like throwing out everything in the specimen freezer to make room for Sunny Delight. They had the nerve to kick me out of the organization just because I was smarter than the Brain Leader and everyone got jealous.

Siberian Mensa, on the other hand, has practically no restrictions on revving your Focus' engine while looping the same drum n' bass song at all hours of the night. There's this one dude in Siberian Mensa that can actually make up Pi to like the ten thousandth decimal. Once Norchky starts making the numbers up he can keep going indefinitely. It must be seen to be believed.

So hey, do you want to get out of here with me or what? That's right, I did see them getting my nephew's cake ready. I guess you better head back in there. Can you take off the Ninja Turtle head when you get to your car, or do you have to wait until you turn off the street so none of the kids will be traumatized? I've just got these sandals on, but I think I should be able to keep pace.