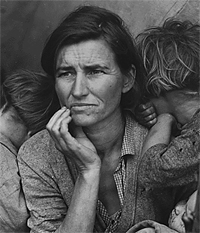 Boredom: a common symptom of Great Depressions.In case you haven't been paying attention to the news, we're fucked. But it's not your fault--unless you're a multi-billion dollar bank or investment firm who can't get their shit together. If so, then congrats, you Jugheads of the modern business world; you're single-handedly responsible for ensuring that future generations of Americans will spend the entirety of their lives strapped to Chinese farming equipment.

I know I'm not one to talk--I've mortgaged my future via student loans to the point where this grilled cheese sandwich I'm eating right now will eventually end up costing me several hundred dollars. But my decisions hurt no one except me and my neighbors, who I wake up every night with my screaming night terrors infested with visions of future abject poverty.

Maybe if I had enough economical sway, I could talk the government into paying my credit card bill or get them to force my landlord into destroying the massive colony of wasps that makes my front wall the loudest in the county. I was given a trophy, but even the wasps don't respect that.

The government can only bail out so many businesses, which is why it won't be long before Predatory Lending Fuckups, Inc. comes running for help, only to be met with a stern look and horizontal shake of the head by a man dressed as Uncle Sam (this is how the economy works); then, this same man will get on a loudspeaker and say "The economy's over. Shut her down, boys." Following this, a gigantic lever will be pulled, causing everyone but the highest tax bracket to walk around with their pockets turned out and faces covered in soot.

When the next Depression hits, don't be surprised if your 19th-Century bootblack Halloween costume comes back into fashion because you will never be rich. But there's no need to feel sorry for yourself as you sit wondering which of your neighborhood cats is the tastiest; with the following tips, you'll ride out the next Great Depression in style.

Learn the Art of Hobology 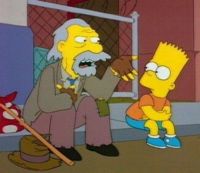 Ohhh shit, bro. I seen that one!If you think I'm about to make some hobo jokes, then you can go right to hell. Everyone knows that any humor even tangentially related to the hobo has been sucked dry by the Internet over the past few years--and this is exactly where you will prosper in our newfound economic hellscape.

Since you will undoubtedly be homeless, take advantage of the world's unquenchable thirst for irony and--with a little makeup and bindle-crafting--transform yourself into the modern-day hobo. This way, when you raid shantytowns for food and supplies, you will be welcomed with cries of, "A hobo? How random! You remember that Simpsons episode?" instead of getting murdered on the spot. While they're laughing like dopes, you'll be snatching handfuls of chicken bones as well as the prettiest child to sell to passing hordes of white slavers.