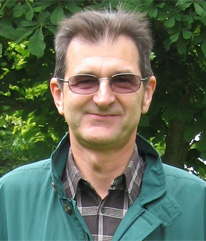 As far back as I can remember, I always wanted to join the world of organized friendships.Hey guys; let's start our own mafia. It will be fun and give us something to do on the weekends. Now, I know what you're thinking: "Steve, isn't there already a mafia?" I can tell you from all the movies I watch on TBS that there are at least several. And I watch a lot of TBS. But I think our network of friends could use a little more organization, don't you? Hell, Linda keeps buying those organizers from the Ikea and our closets have never looked better!

I can tell from Fred's eye-rolling back there that he's either very skeptical or having another diabetic stroke. Someone go and check on him while I expand on the idea I came up with while eating a plate of Pecan Sandies very similar to this one.

First, every mafia needs a secret hideout. I was thinking we could either make it here, in my living room or at the Hardee's up the street. I know the manager there, a fella who goes by the name of Roy, who shouldn't have a problem with this. He coached my son's high school football team, and whenever I run up the street to grab a Chili Cheese Thickburger, we like to talk turkey about the important things in life, like that god-awful center on the intramural basketball team (Go Panthers!). Yes, Fred, my son played a pretty mean game of football before the car accident. You know this and I'll thank you not to bring it up in my presence. 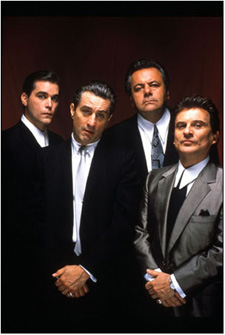 "Goodfellas:" cut out all of the violence and cursing, and maybe you'd have a "Goodmovie." My score: 7/10Next, we're going to need nicknames, because every good mob man needs an alias. Luckily for us, I've already created a few of them with the help of this dictionary/thesaurus combo I won at a Knights of Columbus fund raiser last year. Me, I'm going to be "The Calendar Man," because when you meet me, your days are numbered. Also, this is what the local paper called me when they did a feature on the stacks and stacks of unusable, outdated calendars I keep in the garage, shed, and master bedroom. Jim, you're going to be "Slim Jim." Even though you're dangerously overweight, "Slim" rhymes with "Jim" and we've got to make these things catchy. Stan, your nickname will be "Jack," because no one will see that coming. And Fred, you're going to be "The Worm," because you'll be our information man. This alias is also based on your lifelong struggle with impotence.

Now it's time to think about what our racket is going to be. Drugs are out of the question because I once smoked flavored tobacco out of a hookah back in the 70s and nearly lost my mind. But when I was going over the terrible state of my credit rating, it dawned on me: Linda has been selling Avon for 14 years so far without making a profit. This could be her time to shine! Yes, Fred; we've all seen that special pin your wife wears on those unflattering jackets of hers that tell the world she had the highest Avon sales countywide in June of 2006. She needs to let those dreams die because if Linda is going to muscle the rest of the Avon ladies out of business, your wife will not stand in the way of our new mafia. From my current research, I've discovered that there are 6 other Avon ladies in this town alone. Fellas, we've going to have to hit the next church circular hard with libelous accusations about these other gals' products. Jim, I already came up with one for you: "Beth Leary's scented bath beads made my son gay." Since your son is already gay, this works perfectly! You can thank me later.