Reflections On A Failing Game Console 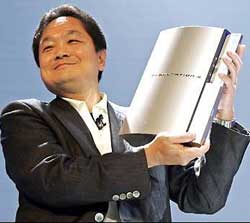 "The PS3 will instill discipline in our children and adults alike. Everyone will know discipline." -Ken KutaragiHere at Something Awful we don't think very highly of console fanboys who invest too much time and emotion into seeing one video game system perform better than another based purely on personal preference. But we must admit, there's something entertaining about seeing anybody fall flat on their face, especially the successful and well intentioned. We're bitter, cynical, soulless monsters that revel in other people's misery.

That's why I'm following the PlayStation 3's massive failure to elicit any sort of excitement with the gaming public with such keen interest. It's not surprising however, that Sony's crown jewel isn't exactly flying off the shelves at this point. All the warning signs were there, and it doesn't take a Virginia Tech administrator to predict that something was going to go wrong with this bad boy.

I guess it would be almost too easy to point to the PlayStation 3's 600 dollar price point as the main reason for its poor performance, but I'm pressed for time and incredibly lazy so that's what I'm going to do. Let's be frank, the thing is 600 damn dollars and once you surpass that mental price barrier people start thinking, "No way am I going to spend that much on a toy!" At one point then President of Sony's PlayStation division Ken Kutaragi said that he expected gamers would "work more hours to buy one. We want people to feel like they want it, irrespective of anything else."

Kutaragi thought this bullshit would fly in the United States? Sure it might work in Japan where not buying a Sony product would bring shame to your ancestors and your family name. Here in America we're fickle consumer whores. We're loyal to no company and we'll step over our own mothers just to get a deal. We know what we likes and it's crappy products at low, low prices.

We traded in the American dream just for that everyday low price guarantee. Fair and equitable treatment in the workplace? Healthcare for employees and families? Fair pay? Fuck it. We threw it all away for the chance to buy a brand new microwave where the food rotates in the middle for $19.99. This is America damnitt. *wipes tear from eye* 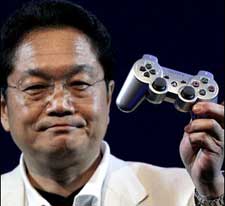 "Microsoft shoots for the moon. Sony shoots for the sun." And Kutaragi hopes to one day use his PS3 to land on the sun.So it's not surprising that a 600 dollar gaming console isn't exactly sitting at the top of the NPD sales chart that game nerds salivate for every month. In March, 2007 the PS3 sold 130,000 units. To put that into perspective the Gameboy Advance sold 148,000 units. The PS3 is basically getting beat by a fucking Super Nintendo. It doesn't take a rocket scientist to figure this one out.

When posed with the decision of what game system to buy, most gamers went with the GBA because hey, the money they save not getting the PS3 can buy a lot of weed. That's what being a smart consumer is all about. You don't need Blu-Ray and Talladega Nights to have fun. Buy the cheaper system and let the drugs do the rest. Of course this doesn't mean the Xbox 360 is making any waves. Sony and Microsoft and both getting beat by what is basically a portable Nintendo 64 with a cheap touchscreen gimmick.

Kutaragi severely misunderstood America's video gaming population. Of the PS3 he said, "I believe we made the most beautiful thing in the world. Nobody would criticize a renowned architect's blueprint that the position of a gate is wrong. It's the same as that."

Nobody gives a damn about the beauty of games. It's mostly goons and that's it. The rest of the video game buying public bought a PlayStation 2 because playing a couple games on a Saturday night while smoking weed and hanging out with your buddies is about the most exciting thing to them, and they aren't thinking about the artistic meaning of Ico, but how much fun it is to get drunk, get high, and play Madden.

But when all your demographic does is get drunk, get high, and play Madden, they aren't going to work more hours to buy a video game system. They are going to work the minimum numbers of hours they have to in order to purchase marijuana, and if they happen to be able to afford a PlayStation 2 after that, then fine. Yeah, they're really itching to buy a PlayStation 3, when it's 150 bucks that is, including a copy of Madden. But they might be able to just get that off Torrentspy and convince their smart Asian friend to mod their system for them. Oh, it'll be hacked eventually, once there are some decent games to download.

No more on the way? I guess they gave up.If you believe anything Vice President of Sony Computer Entertainment Europe Phil Harrison has to say then demand is "unprecedented"! Sony simply can't keep up with the massive numbers of consumers that want the black George Foreman Grill looking video game thingy with the neat Spiderman font on it. In fact if you can find unsold PS3s just sitting on store shelves he'll give you a thousand dollars! Well look what I found! The guy owes me at least $24,000. I wonder how he justifies making statements like that when he has to literally beg people to buy a PS3 from him. He pretty much sounds like every ebay seller who thought they were going to strike it rich reselling PlayStations.

The PS3's sorry lineup of games isn't exactly helping matters much. I know people are getting pretty tired of "lol PS3 games are brown!!!" jokes and all but shit, it's true! What else are you supposed to say about them other than they are terrible Xbox 360 ports with brown hues and bloom? If you ain't talkin' brown you ain't talkin' PS3. Of course, there's only so many times you can post about how great Resistance is until someone actually plays the game for themselves and figures out it was all just a dream. 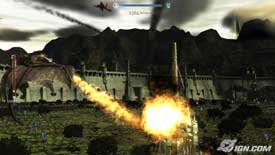 The high-def generation is here.But just you wait for the PS3's killer ap, the one game that'll really show you non-believers! Apparently that game is Lair. When I first saw Lair I was blown away by the visuals. Of course I was only watching it on YouTube in a tiny window and let my mind fill in the blanks. But for some reason video game screenshots and preview videos get uglier and uglier the closer they get to release.

Once higher resolution screenshots started coming out you could clearly see that the character models looked like they were ripped straight out of Myth, and unlike Myth they just appear out of nowhere. The next batch of Lair media will have the game looking like Star Fox 64 at this rate. Lair fanatics will tell you, "Oh it looks better in motion!" True HD and all that nonsense. So what? I could hook up my computer to my HDTV and play Magic Carpet right now.

The PS3's main competition is the Xbox 360 and let's be honest here, they're both pretty big piles of dogcrap. But the Xbox 360 wins in my book for one reason. It's 200 dollars cheaper than the PS3. At the end of the day when all you're left with is a brick of a game console and an expired warranty, well, Microsoft got away with less of your money. While you don't see a lot of "ARGH MY PS3 IS DEAD" posts because, you know, nobody is buying them, Sony's motto on system failures is similar to Microsoft's, "early and often".

I guess on a personal level the PS3's saving grace for me was the announcement that a sequel to WarHawk is being developed for the system. While I may be remembering the title through rose-colored glasses, I have fond memories of the PlayStation original. It wasn't a perfect game but it was a shame they never made a sequel. I enjoyed the flying mechanics and hoped that they would expand on it, but I guess Sony decided to cash in and turn WarHawk into a squad-based multiplayer Battlefield 1942 clone. Welp. 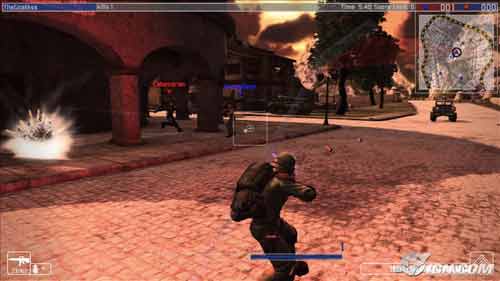 You know, as cynical as I am, I was really surprised to see this news. I'm not outraged or anything, just completely baffled. I don't really understand the rational or how any sane person could come to the conclusion that WarHawk should be a squad-based multiplayer shooter. It's Star Fox Adventures all over again. In the end, it's just another blunder in the hilarious timeline of the PlayStation 3.

Watching Sony fail to muster up any kind of support for their 600 dollar video game system has become a time honored tradition in my household. Since its inception we have watched it spawn as the triumphant successor to the PlayStation 2 only to become the laughingstock that it is today. Maybe someday the promise of 1,080 progressive horizontal lines of brown will be enough for this plucky little console and its wacky visionaries to find a home in the hearts of the million of gamers worldwide. But today, it simply isn't happening.