It all started with forums user DeathTramp requesting help with an uninteresting problem that had obvious solutions:

"OK, so I have this Gamecube. It looks like this. 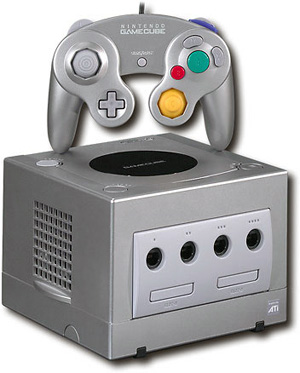 If I sell it, I'll get at most 20 dollars, but I've seriously asked friends to take it from me and no one wants it. So I thought I'd ask SA: What do I do with this gamecube?"

The SA Goons came up with clever suggestions, all of which were ignored. Instead, gross stuff happened, including a goatsplosion, scatological forensics and possibly a blown-off finger. (None of this involved a GameCube.)

What follows is either a series of inspiring displays of devotion to an Internet community, or a dispiriting example of how people disregard creative options to wallow in hapless depravity. Maybe you will think these happenings are actually cool; perhaps you will just enjoy mocking the participants and/or lamenting what humanity has become.

OK, back to the start: DeathTramp's GameCube dilemma. Goons initially reacted with concern (for the GameCube):

"I am going to be sad when you hurt that Gamecube." -- YOURFRIEND

Eventually, Goon-care spread to poor, gameless kids. Achmed Jones was the first to suggest organizations such as Child's Play, Home of the Innocents and Get Well Gamers. A bunch of other Goons supported this quality option, but I'm not going to reproduce their posts in Comedy Goldmine, because "give a thing to charity" isn't funny. Unless ...

"Put it in a PS3 box and then donate it to a kid." -- President Kucinich

"Put the Gamecube on the end of a fishing line and reel it in sporadically as the needy child chases it, a la Looney Tunes." -- Miau

"Turn it into a tampon dispenser, then donate it to a children's hospital. I'm sure there's sick kids that have their first period in the hospital. What better to help them through those tough times than the Tamcube?" -- Quantify!

Chinatown attempted reverse psychology: "Whatever you do, do not under ANY circumstances donate it to the poor."

Volcott reversed it back: "Remember, if you don't donate your gently used video game systems to the poor and Irish, you are basically Hitler."

"Eat it. Eat that gamecube. For charity." -- Lowclock

"Put some dots on it to turn it into a big die. Then bring it to the casino and demand to use it at the craps table." -- Zoowick

"Paint it like a die and hang it from your rear view mirror, then drive your car into a children's hospital/homeless shelter/homeless children's sheltspital claiming it was obstructing your view and sue Nintendo for one million dollars." -- BillyandCloneasaur

"Hollow it out and use it to hide weed from your mom." -- Good Citizen

"Hollow it out and use it to hide weed from MY mom." (She'll never look there.) -- Beatnik-Filmstar

"Make it into a hat! Hollow that shit out and make a goddamn hat." -- Zorba the Greek

"Learn electronics and programming and make it into a robot friend." -- Locus

"Stand on it to jump into a previously unreachable area." -- Blurry Gray Thing

"Do a thing with it haha. do a thing and video tape. lol so wrong (but it feels so right)" -- Smokey