If they manage to pry their attention away from their Nokia N-Gage, any hardcore gamer will tell you that modern video games are all about CGI, pixels, surround sound and digital graphics.

In many ways, Johnny Mnemonic - the Keanu Reeves film - was eerily prophetic. Everything you come across in a video game has been created within the confines of some crazy virtual reality version of Paint Shop Pro instead of the real world. Or has it? 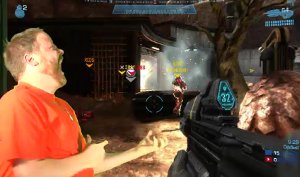 We're fortunate enough to have a sizeable game developer presence in our forum, and through them I've heard many surprising stories about in-game elements which were created in real life through good old practical effects.

They also provided some great tips for casually covering up extremely damp pants in public, but I suppose that falls outside of the scope of this article.

Play through any of Telltale Games' excellent adventure series, and you'll likely encounter the relatively unassuming sound of the in-game mouse click hundreds of times. It certainly doesn't seem like anything out of the ordinary, perhaps from a library of digital noises. In reality, that sound is far more.

Telltale's sound engineers encircled a standard mouse with the highest-grade recording equipment, then captured the sound of a finger physically clicking the mouse button while simultaneously playing "that scene" from Event Horizon and the Wilhelm Scream. They took this bizarre half-second clip to Mark Hamill, who impersonated it as best he could, producing the now-legendary Telltale Click.

The halo in Halo? Just a hula hoop coated in dry pasta, then hastily spray painted.

In Fallout 3, the sounds of punches were produced by placing a chunk of meat in a paper bag and recording the moment of impact from the business end of a sledgehammer. Hoping to outdo its predecessor, every sound effect in Fallout: New Vegas (from footsteps to gunshots to robots yelling to Ron Perlman's intro) has been created by wrapping its real life counterpart in a paper bag and hitting it with a sledgehammer.

The explosions in Just Cause 2 were not only numerous and awe-inspiring, they were also filmed against a green screen. To make matters more bizarre, they weren't actually explosions, but rising balls of bread dough which were later time-lapsed and recolored.

No one, however, can account for the accents in that game. They simply showed up without explanation.

One of the most immediately noticeable pieces of eye candy in modern hockey games comes when you load up a rink and marvel at its shiny and reflective surface. I had always assumed this was pulled off with some sort of fancy shader, but to my amazement the industry standard for creating this effect is to place a full-length mirror on a flatbed scanner and capture one quadrant at a time, then compile those individual scans into a large image that is overlaid across the ice texture.

Mass Effect 2 features an early scene in which the game becomes appropriately silent while Shepard steps into the vacuum of space. In order to achieve this eerie moment, BioWare licensed the entire Beatles song catalog, then recorded the entire thing as it played on a boombox set on "Mute". 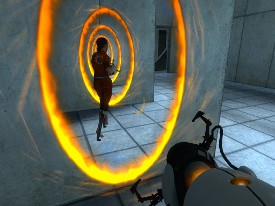 If you've had the pleasure of playing Portal, you've probably spent more than a few minutes gawking at the titular gameplay mechanic / graphical effect, which creates a connected pair of tears in the fabric in reality through which the player can instantly travel long distances and see themselves in a state of infinite regression.

It's all very impressive and comes across as something remarkably complicated to pull off. In truth, however, it was simply video footage of one of Gabe Newell's routine level 2 necromancy invocations.

Perhaps the biggest surprise came when I discovered that the extremely convincing water effects in BioShock and BioShock 2 were created by turning on a projector, then having every member of the development team make "wave-like forms" with their hands, creating a sea of rippling shadows which were then digitized - I assume via some form of superconductor connected to an old computer with spinning reel-to-reel storage.

There were many more insider stories, and I expect that after the publication of this article there will be more to come. That said, I'm having a difficult enough time getting my head around some of the amazing things that have been pulled off by creative people making the most of relatively unsophisticated tools, so for now I'll leave you to wonder if you'll ever be able to look at video games in quite the same way again.