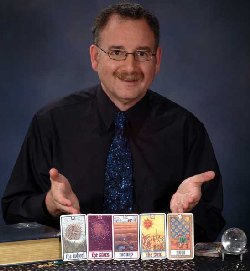 "You fuck with me, you see,
I'll react like an animal, I'll tear you apart,
If the masterpiece was murder, I'd make shit art,
Niggas knew I wasn't wrapped too tight from start,
But bein' a little off, landed me on top of the charts (whoo)" –50 Cent

Some things in this world are unexplainable. Some things are not meant to be understood. The human mind can only hold so much information, for this vast universe is too epic for our feeble brains to fully comprehend. What secrets will be unveiled after the mossy rock of truth is turned over (besides gross worms and bugs)?

Such an event took place last week when I was driving home from work after a particularly tiring day of posting on the SA forums and making origami ducks. I pulled my expensive Eddie Bauer SUV, which simply loves to guzzle fossil fuels and ground up Iraqi baby limbs, behind a van that was signaling to turn right onto the freeway service drive. Traffic was heavy as always and I impatiently waited for the van to pull into the single gap that only comes along every 5 minutes or so. I gasped in disbelief when I spied a rare gap that would allow for 2 cars if the initiative was seized. As I looked at the oncoming traffic, I thought I saw the van pull out, so I gunned the gas like zombie Dale Earnhart. Alas the move was a feint on the van’s part, and I slammed into it with great velocity, causing bumper damage and much more. Things would never be the same after this collision.

When my vehicle impacted with the van, the hot coffee I had in my cup holder was thrown into the air, bouncing off the dash and splashing in my face and eyes. I screamed like a little girl as my body was thrown with rag doll physics into the windshield. This was because I refuse to wear seatbelts as I feel that the action questions my manhood and they are part of a vast Communist conspiracy whose goals are yet to be uncovered by myself and my half-brother Roger. Also I’d just had a large helping of pudding at lunch and my stomach was bloated and distended, making seatbelt use out of the question. The driver of the van was a woman in her mid-70's who seemed to be fine, but scolded me for my bold driving methods and told me to stop my high pitched panicked screaming. She wanted to call the police but with my quick ninja instincts I spin kicked the phone out of her hand and it landed on the busy freeway where a truck ran over it. Around this time I started to have a strange buzz in my temples and the coffee was reacting poorly with my contact lenses, so I gave the shocked old bag my insurance information and sped off towards home so I could gather my senses.

It seems that the accident has caused some drastic change to my brain when it was scalded with hot coffee and slammed into the glass windshield. I returned home and swept the rogue rodents and insects off my filthy cot so I could lay down, my head still freshly abuzz with newly awoken activity. Instead of my normal haze of cloudy, disconnected thoughts and random synapses of latent electric stimuli barely enough for me to be functional, things were clear for the first time in my life. It felt like my eyes could see farther than ever before, and even into the future. The future was so bright that I had to wear shades. In quick snapshots, all that was to come was clear to me, giving me great knowledge and foresight. This was a huge power, and I thought to myself that I must not abuse it and keep this secret to myself.

But what fun is that? Besides I needed a topic for today’s update so I might as well use my new found god-like powers to help all you mere humans with your pathetic normal brains. I spent the last couple hours letting the visions come to me, and I am going to present to you what I saw in the near future for the month of July in the year 2008. Please do not let this knowledge of the future scare you, for we are bound by fate and it is unavoidable. Accept it with an open mind and please Paypal me for my miracle visions.

Things that will come to pass in the year 2008:

Gas will cost $5.00 per gallon but it won’t matter because everybody will be riding Segways.

The United States will be bombing a third world country because the aunt of a CIA agent will have a dream that they are harboring weapons of mass destruction, and Shaun Cassidy was in it too, but that’s beside the point.

Steve Perry will buy the NHL for his pure breed pony ranch, and he will turn it into an adaptation of the movie “Roadhouse” on ice.

The #1 TV show in America is a spinoff of “Friends” and is called “Pals”. The only twist is that the entire cast are sea monkeys living in Boston.

A man whose name starts with a “B” will go see a movie, drop his popcorn, and find a quarter. 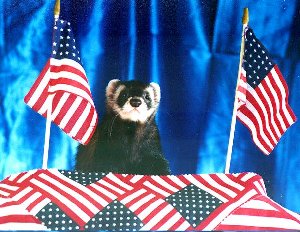 The ferret president will be responsible for millions of deaths.

The first, but not last, ferret president will be elected.

Bill Cosby will get so exasperated with the black community that he will turn into a robotic T-Rex, like “Grimlock” from Transformers, and eat Harlem.

In the year 2008, humanoid catfish will rise from the bayou and take over Louisiana and parts of Mississippi. The ferret president sends the national guard to quell the uprising and thus starts the second American Civil War.

A really funny commercial featuring a talking baby or animal is shown on TV.

The ice caps melt and everybody drowns except for Kevin Costner. The humanoid catfish rule the planet but Kevin Costner gets into a grand adventure and blows up their headquarters and crowns himself the ruler of the water world. Then he dies trying to give himself gills.

The U.S. currency becomes obsolete and the new way of determining wealth is with “style points”.

Zack Parsons becomes a world-renowned writer, but is bludgeoned to death with a garden gnome outside his New York apartment by a deranged redheaded fan.

NASA sends another robot to Mars but this time forgets to put the batteries in. 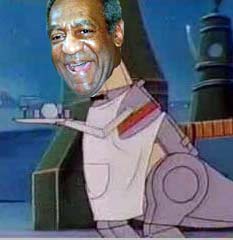 Robot T-Rex Cosby is serving up some whoopass on Godzilla as well as the lazy people in the black community.

Scientist find a way to clone Godzilla and send him to battle the robot T-Rex Bill Cosby in an epic Tokyo fight that leaves the city in ruins. Godzilla defeats Bill Cosby with the help of Mothra and Malcolm Jamaal-Warner.

China and India’s population grows so large that you don’t have to hold for outsourced tech support any longer, but you still can’t understand them.

A pack of bubble gum costs one million style points, but computers are so cheap that people just toss them out of windows if it crashes or you get sick of talking to Asian tech support.

Lowtax becomes the king of the Internet and is beheaded by a revolutionary tribunal.

You will die a painful death after hopping up and down on a beaver dam even though you knew it could be dangerous.

Sell your Apple stock and invest in porkbellies!

These are just some of the things I have seen in the past half hour as I’ve been rubbing moisturizer into my ruddy, corpulent knees. Like I said, do not be frightened of this knowledge. Having this power does not make me a freak to be avoided or worshiped as a demi-god. Well maybe you can worship me a tad and give me some virgin brides and some Soft Batch cookies and small children to rub my knees. This will be acceptable seeing what services I will be blessing humanity with my visions. I am unstoppable.

Editors Note: Shortly after putting this update on I slipped on the moisturizer and fell into my bathtub, hitting my head on the soap dish. For some reason my visions of the future have disappeared and now I can only see into the past, but no more than 15 minutes ago. Sorry for letting you all down again. I’m going to have some Fruit Loops and try to forget this whole thing ever happened.