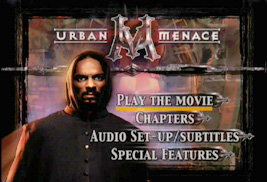 Overview: Snoop "Can't Even Rap Right" Dogg and cohorts run around a burned-down building for a little over and hour. Unfortunately, I don't think anyone got tetanus.

The Case For: Ice-T's drunken ramblings, which are interspersed throughout the movie, can be pretty funny.

The Case Against: Ice-T's drunken ramblings are the only things you can consistently see and hear, since the movie was apparently filmed in a Persian Blue Icee machine. 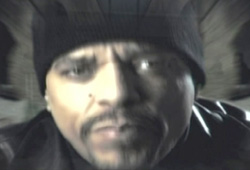 Before I get a bunch of condescending emails about screen formatting and aspect ratios and nerd shit like this, let me say that I fucked with this picture in Photoshop for over an hour, then I realized I didn't need to fix it since this is actually what the movie looks like.

In this country movies can serve as a racial divider. There are "white movies," in which uptight white people do silly things, and "black movies," in which black people talk really loud about uptight white people doing silly things while getting their hair done and/or shooting each other. If you don't believe me you can check the stats: Studies tell us, for instance, that only three white people ever watched "Barbershop," and that was just because they stepped into the wrong screening room at the theater when looking for the movie "Garden State."

"Urban Menace" sets out to change this phenomenon. Instead of setting out to make a movie that was distinctly "black" or "white," the movie's makers decided to craft a film that was "a piece of shit." Director Albert Pyun (who was also responsible for such masterpieces as "Nemesis" and "Cyborg") accomplished his goal, creating a veritable fireworks show of fuckups that is impossible to enjoy, no matter what race you happen to be.

For instance, the movie opens with Ice-T. This, of course, is to draw in a white audience from the very beginning. Ice-T, to the average Caucasian, is like Will Smith, only a little edgier. For a set amount of money Ice-T will lend his trademark blackness to any project, be it rapping for a new sitcom or selling grills on late-night TV. This, in turn, gives a "white" program an air of black authenticity, which allows white people to feel cultured and intelligent. Nothing pleases a white person more than to say "Well, I was watching that new movie with Ice-T in it…" to his friends.

In reality Ice-T doesn't have a lot to do with the movie. He is mostly relegated to a narrating role, where he is given time every now and then to ramble on about things that have absolutely nothing to do with the movie. Before the movie begins he gives us a disclaimer, warning us of impending violence and curse words. I have to say that "Urban Menace" is at least right in that respect. There was a lot of violence and cursing when I screamed "fuck you" at my roommate, who was very upset with me after the movie drove me into a frenzy and forced me to throw his television through the living room window.

After Ice-T's totally effective and not at all masturbatory or pointless disclaimer, we're introduced to the movie's main setting: A sun. Please note that I did not say "our sun" or "the sun." Our sun is yellow, and it is a little-known fact that the creators of "Urban Menace," for all their faults, set standards for space explorers worldwide by discovering, then filming a movie on, an alien sun that glows as blue as Natalie Wood's waterlogged vagina.

Okay, that's probably not true. But it's the best explanation I can come up with regarding the film quality. Take, for instance, this picture: 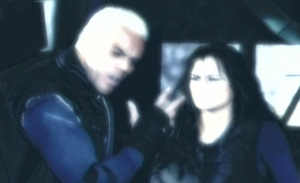 Well, ladies and gentlemen, a little company named "Filmwerks" has the answer. The company behind the visual effects in this disasterpiece (my black slang dictionary tells me "disasterpiece" is an applicable term in this situation), Filmwerks took a new, exciting route in the creation of interesting eye candy. Here, using my patented Bulleted List Technology, I will give you my best approximation of a day with the crew at Filmwerks: 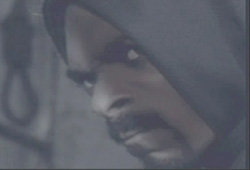 Again, of course I am exaggerating. Obviously the people at Filmwerks couldn’t film elderly people having sex since their grandparents filed an injunction against them the last time they caught them filming through their bedroom window. But still, the point remains.

So after a little more ranting and raving from our "boy" Ice-T, who by this point (ten minutes into the movie) is pretty clearly drunk, we step away from the blue screen sun and into the world of mid-nineties computer animation. We're shown the "Holy Friendship Church," which is on fire. We know it is on fire because six or seven orange pixels (fire) with six or seven gray pixels on top of them (smoke) kind of blink and fade over the windows like broken bulbs on a tacky Vegas casino sign. The camera then cuts to Snoop Dogg, who is dressed in preacher's garb and faintly smiling. Why is he smiling? Did he burn the church down himself? Did a small wooden box in the church contain naked pictures of him as a child? Was the church, in fact, made of marijuana? We don't know, but the next shot, an image of his eyes turning bright red and leaking blood, sure leans towards that final option!

Cut back to the strange blue sun. A gentleman who bears a striking resemblance to Jean-Michel Basquiat wanders down what could be a hallway made entirely of blue light and smoke. He talks with a man whose race is entirely negated by the lighting, walks out, and talks to a reasonably attractive girl in a car. Then he drives off. What is said? How is the plot progressing? We don't know, because you can't understand a goddamn thing anyone says!

Up to this point in the review you may have noticed a lack of summary. This is because the makers of "Urban Menace," in their infinite wisdom, decided to most of the audio in their film very, very quiet. The rest of the time they apparently decided to pay homage to the great silent urban-battle films of the thirties, in which Charlie Chaplin dressed in blackface and shot people with those funny little pistols that fire a flag that say "POW." Chaplin, of course, died in a violent dispute over rights to the song "Gimmie My Money You Bitchass Trick," but because of movies like "Urban Menace" his contributions to black society live on.