Private Eye For the Straight Guy

My good friend Wolfie the Detective, searching for the infamous serial killer The Effeminate Wolf That Looks Like A Detective. Sadly, Wolfie never found him.

The dame sidled into my office, stirring me from my routine post-breakfast nap. This struck me as strange for two reasons: 1. No one sidles anymore. I mean, come on. 2. My "office" was actually just the bedroom in my house. Yet there she was, five feet and ten inches of pure woman held together by a flexible layer of skin. Oh sure, there were probably muscles and veins somewhere in there too, but I'm being figurative here. This woman was so hot, she'd make an entire tray of ice cubes melt by mistakenly leaving them on the counter overnight.

After waving her into the room noncommittally, I tossed back a shotglass full of scotch, immediately regretting the decision as it shattered on the wall behind me. Damn, I needed to stop taking my inner dialogue literally. I made a mental note to have my secretary write that down for me later, and then it hit me: I had no secretary. I'd have to write down a memo later, reminding myself to hire a secretary so that she, in turn, could remind me to stop taking my inner dialogue literally. This was already shaping up to be one rotten day. Deciding that I needed something to steel my nerves, I poured myself some more scotch (this time in a coffee cup), and tossed it over my shoulder. This time the cup rebounded off the wall without breaking, and I flashed a proud grin at my soon-to-be client, tapping an index finger against my forehead to illustrate the impressive brains within.

She leaned forward and planted her hands on my desk, showcasing a pair of breasts so beautiful that they could only be described as "breastish". They were like two perfectly round bowling balls, only they weighed less and didn't have holes... that I could see. Being an investigator, I had to find out. I casually plunged my head into her cleavage and made frantic swimming motions as I ogled down her blouse. She immediately slapped me with the strength of ten really weak sailors, and I sat back, rubbing my jaw and weeping only a little bit. "Big boys don't cry", I thought to myself while tossing back the entire bottle of scotch, "big boys don't cry". I hadn't been able to spot any holes during my expedition, but her reaction indicated that she was hiding something in there. I reached out with both hands to see what it was for myself, but she slapped me once more. Something was definitely fishy all right, but it would have to wait. There was business at hand.

"Before we get started," I began, "is anyone that's involved with the case in any way whatsoever a butler?"

My hand crept for the .38 special that was tucked away in the top drawer of my desk. "Are you a butler?"

"No one's missing or dead, you dumbass. I'm here to hire you as a humor writer."

"Listen here, toots. They call me Stalker because I relentlessly track down my man, and sometimes watch him shower. Do you see where I'm headed with this? I'm a private eye, not a writer." I removed my football helmet and slammed it on the desk for added emphasis. "I'll never write humor."

"Never," she replied, "is a long time. Especially when you can't count, so you mark your wall with chalk like you see people do in prison movies. Only you don't know what the marks even signify, so your wall is just a mess of meaningless scribbles."

She had a point. 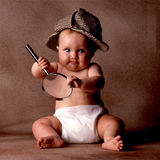 Another good friend, Detective Baby. This photo was taken just days before he lost his Investigator's license for beating a suspect to death.

"Look, even if I accepted your offer, you'd only be disappointed with the results. I wouldn't know humor if it crept up on me in a dark alley and hit me in the head with a sock full of nickels, or if it missed and just hit my shoulder. Maybe if it was light out and I could see it coming, sure, but not in a dark alley."

"You won't be writing in a dark alley, and you just unknowingly proved my case. You have a way with words."

She was right again. I did have a way with words. I used them all the time to do things like yell at random people on the street, use the telephone, and yell at random telephones on the street. There was even that one marvelous day when someone asked me what time it was, and I told them. I could use words, after all. How long had I been so oblivious to the unfathomable power that I wielded?

"Besides," she added, "I'm here on behalf of Rich 'No Tax Because I'm A Crime Boss' Kyanka, and this is the sort of offer you can't refuse. Because he's a crime boss. He wants you to write for Something Awful."

Kyanka's involvement changed everything. He was the sort of thug that even I hesitated to cross paths with. His viciousness was legendary; one time he had actually shot a man just for shooting him first. If given the choice, I'd have rather faced down Johnny Gimme That, or his considerably nicer brother Jimmy Please. But I wasn't given a choice, and my life was suddenly at stake. This was serious, it wasn't a clown with severe diarrhea running around in circles and screaming for help. This wasn't a friendly game of kickball. This wasn't one of your good-time socials, where everyone listens to rock n' roll and holds hands unsupervised.

"I suppose there's not much I can do. I'll go along with this, but I want a... 'bonus' in addition to my regular salary." I licked my lips and winked suggestively.

"Anything you want," she replied with a smile. Her hand gently ran down the length of my arm. "You name it, and it's yours."

Three minutes later, we were leaving the Happy Time Ice Cream Parlor with the most delicious banana splits to have ever been split. We ate as we walked along the city's mean streets with fudge smeared on our faces, resembling Siegfried and Roy after a particularly wild evening, minus the horrific neck wounds. Taking another bite, I thought the situation through. Something Awful was a sleazy publication, so shoddily written that it didn't even bother to charge it's readers. Even still, I was afraid. What if my writing was even worse than the schlepps who wrote there regularly? What if I actually used the word "schlepp" in an update? The stakes were too high. I had to find a way out of this, whether it meant facing Kyanka's wrath or not.

"You know," I said through a mouth full of vanilla ice cream, "we entered into an oral contract, yet you want me to write. Since the contract itself isn't written, it's invalid. Oral contracts only work when you're dealing with public speakers, or people who sing."

"That makes absolutely no sense."

"You know what else makes no sense? Me having a jetpack. Yet I do. Game, set, and match."

I then tore off my trench coat, revealing the stunning piece of machinery that would take me far away from the reach of Kyanka's goons. The dame gasped in amazement as the jetpack's metallic shell glistened in the sun like a jetpack on a sunny day. Before she could react, I sprung into action, running home as fast as I could with that incredibly heavy thing on my back. The Stalker had outwitted his enemies once again, and successfully avoided having to write for Something Awful.

Being the State Og representative is a lot like teaching dogs how to shoot guns; both professions require the burial of dozens of cats every night. But enough about my job, let's look at this week's update, which includes an exciting play-by-play of a heated chess match!

A weeping Kasparov moved his rook to D7, a decision he would come to regret. Deep Og considered it's next move, then began considering reality itself. After coming to the realization that the entity known as Gary Kasparov could be expressed by the equation 3*(3 - A), the computer simply erased all evidence of the number 3 from it's memory banks, and in doing so changed the course of history so that Kasparov was never born. As you'll recall, Bobby Fischer won his first world championship by using this very same move.

Wow! If I knew chess was that exciting back when I was younger, I probably would have still blown a ton of money on Pogs. Check out this week's State Og!