If you read video game magazines in the late 90s you were probably subjected to this ad dozens of times: 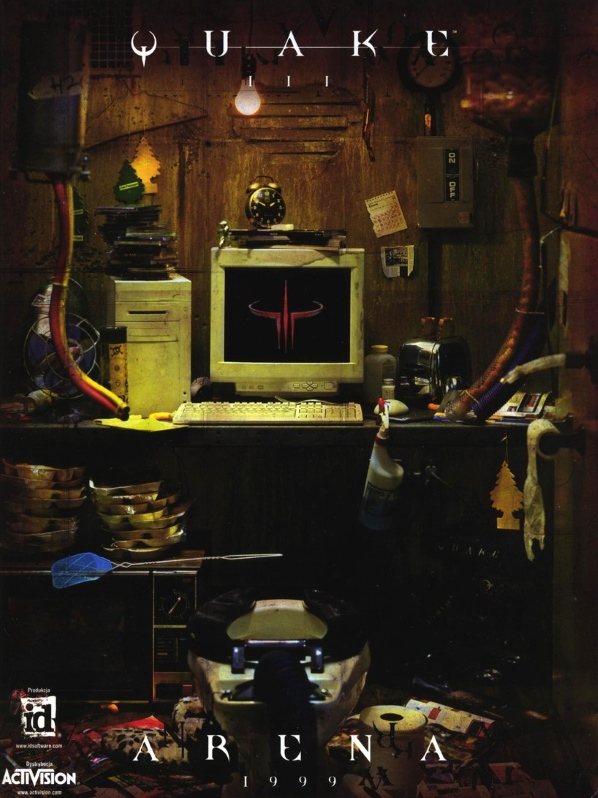 Well, it was my bedroom. I'm not saying that I had a similarly gross room. I mean that magazine ad was literally a photograph of my bedroom, taken without permission. For years I was too embarrassed to admit it. Now enough time has passed that I can open up about the turd chamber.

Before we go further, there's one very important detail I need you to understand. The room didn't look the way it did because I was a slob or because I planned to play Quake 3 for days at a time. It was a purely decorative choice, a celebration of the game's industrial themes.

While designing this space, I imagined David Fincher being forced to recreate the music video for Nine Inch Nails' Closer in a haunted gas station bathroom. Lots of water damage and rust. Some exposed electrical wires and plumbing. In a burst of inspiration I installed the sausage feeding tube, water chug station, and an old-fashioned alarm clock. The idea was that I would set an alarm to be reminded when it was time to frag. The alarm was constantly ringing. Just a small detail that didn't come across in that unauthorized photograph.

Does the room still look like that? Ha! Of course not. It's constantly changing. You see, as an artist I am always finding new ways to update my home in a way that reflects the hottest new video game releases.

My living room underwent a complete overhaul to celebrate the release of Super Mario Sunshine. Dozens of rusty spikes of various sizes (mostly bent at odd angles) emerged from my tv. My couch was completely covered in a blanket of moldy steak-umms.

The release of Civilization V overwhelmed me with its sense of majesty and optimism. This was reflected in my bedroom, which I converted to a pile of insulin needles so deep it resembled a ball pit.

Then came virtual reality. Hoo boy, what an exciting time that was! First I replaced the Vive's headstrap with a bear trap covered in blood. Then I nailed hundreds of creepy broken dolls to every wall in my home, both eyes on every doll unnecessarily held open by rusted safety pins.

Prey was everything I hoped it would be, and more. So was my tribute to the game. For three months before Prey's release I picked my nose, then wiped my fingers on the top of my desk until the entire surface was covered in dried snot.

When The Legend of Zelda: Breath of the Wild won us over with equal parts ambition and restraint, I responded in kind by turning my coffee table into a pile of wallet chains submerged in my vomit.

Where will video games take my home's decor next? I can only guess, and continue to collect scabs in this mason jar.