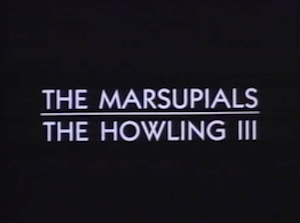 Overview: This is a werewolf movie called "The Marsupials", so we thought it would be a stupid zany knock-off featuring half-man, half-kangaroos chewing people's faces off. Instead, we got the same familiar disappointment from Warriors of Virtue 2: there are no Mangaroos in sight, and somehow that makes the movie even worse.

The Case For: A tiny fraction of the movie revolves around the characters shooting their own terrible werewolf B-movie, so the shitty acting and effects in that part are supposed to be ironic and meta. Wait, this isn't the Case Against, nevermind.

The Case Against: The rest of the movie isn't supposed to be intentionally bad, but the acting and effects aren't any better. Also, an ending so catastrophic that it's completely destroyed the abstract concept of the fourth wall forever.

If you're looking for a scary movie this Halloween, then look no further. Nothing could possibly be scarier than The Howling III: The Marsupials. And we're not talking about some pedestrian jump scares here - we're talking about serious, life-altering psychic trauma that will irreparably damage your faith in the human race forever. On the plus side, for most of you out there reading this, we probably destroyed that years ago, so here's your chance to bring your friends and family down with you. Have a taste of what's in store for your precious eyeballs:

Don't ask us to explain why his hairpiece has psychic powers, or why she sounds like Betty from Kung Pow when she sees police composite sketches of Mr. Clean. In fact, we're not going to even attempt to explain anything about The Howling III, mainly because we can't. Nobody can. "Australian werewolf movie" isn't a summary, it's just a starting point for the insanity to follow. Some degenerate film nerd might try to tell you this is an example of "Ozploitation" or "Australian new wave", but even if those are real things, this can't possibly be a typical example of anything[1]. Let's just say that if you've ever wanted to attend an orgy full of sweaty fat guys with terrible hairpieces and people cosplaying kangaroos with badly botched skin grafts getting fucked to death by werewolves, this movie is for you. For the other 7.124999999 billion of us, yeah...not so much.

There are three kinds of characters in this movie: 1) werewolves, 2) people trying to exterminate werewolves, and 3) people who are uncontrollably attracted to werewolves. Oh, and a healthy dose of 4) people who are seriously torn between exterminating werewolves and wanting to make unspeakably gross alien flipper babies with them. As a result, even just the first ten minutes of this movie are chock full of references to werewolf rape, and it only degenerates from there.

[1] We've seen everything from Nollywood and Indonesia to, well, the shit we watch, and we've sure never heard of "Australian New Wave", so we get the feeling it's not a cultural movement that changed the face of film forever, and if Howling III is anything to go by, then thank Christ for that.