Having got all the unwanted movies out of the way, we're finally starting to see movies that people actually want to watch creep into cinemas. This week there's the latest in the Marvel superhero saga in the form of Captain America: The Winter Soldier and it seems that Ian "Professor Clumsy" Maddison is starting to warm to the phenomenon. Meanwhile, Martin R. "Vargo" Schneider is less impressed by the new Arnold Schwarzenegger vehicle Sabotage. Finally, we crank up the old chron-e-mail-o-tron and find out what apocalypse survivor Donovan Laird thinks of Biblical retelling Noah.

EXPECTATIONS: I don't have the best relationship with the Marvel movies, as anyone who regularly reads this column can confirm. By far the best, though, is easily Captain America: The First Avenger, with Thor: The Dark World coming in a close second. So that's one Captain America movie and one recent sequel, which bodes well for this new Captain America sequel. I'm not getting my hopes up, though. Removing this character from his World War II setting and inserting him into the greater SHIELD continuity can only be detrimental, if you ask me.

REALITY: In 1933 Fritz Lang released The Testament of Dr. Mabuse, the third in his trilogy of Dr. Mabuse films. In it, we are reintroduced to Kommisar Lohmann, the protagonist of M, one of Lang's earlier and completely unrelated films. The appearance of this character is almost a joke for Lang's fans, but of course the character fits even if you haven't seen M. In 1943, Universal Pictures put out Frankenstein Meets the Wolf Man, a film whose title should tell you everything you need to know about it in the context of the point I'm trying to make. Frankenstein Meets the Wolf Man is absolutely terrible, but it set a precedent for all the following Universal monster movies, where every character was thrown in there at once. The Testament of Dr. Mabuse was brilliant, but its use of a character from M left little impact on the cinematic landscape. 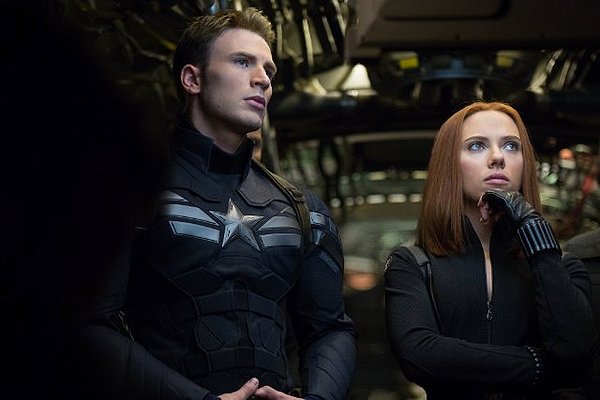 Make sure you look as intrigued as possible by whatever has just happened off screen.


The reason I bring this up is to highlight that sometimes these character crossovers are done well and sometimes they are not and how successful they are is not at all connected to how artistically meritorious they are. The real point is that in 2008, when Robert Downey Jr. appeared in The Incredible Hulk, audiences went wild and it started the long road to The Avengers, for better or worse. Captain America: The Winter Soldier is beholden to this same thread of character crossovers and inter continuity that has poisoned the rest of the Marvel Studios productions, but it is really quite good in spite of all that. Or, maybe, even partly because of it.

Yes, I do believe that the Marvel movies are finally coming into their own. Captain America: The Winter Soldier, does work very well as a stand-alone movie, as a sequel to The First Avenger and as the latest episode in the extended SHIELD serial, though not always all at once. This time around, Captain Steve "America" Rogers (Chris Evans) and Natasha "Black Widow" Romanoff (Scarlett Johansson) are thrust into a world of intrigue and plot twists after an assassination attempt on SHIELD director Nick Fury (Samuel L. Jackson) leaves them unsure of who to trust, with Secretary Alexander Pierce (Robert Redford) looking particularly suspicious. In their search for the truth, they are pursued by the mysterious "Winter Soldier." 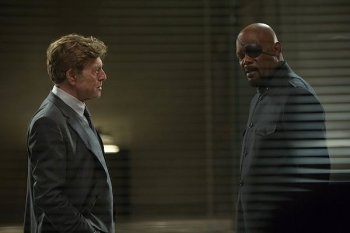 Yeah, this actually happens.So I'm going to go ahead and get all the negative stuff out of the way first so I can continue the review with an explanation of why I genuinely enjoyed this movie. As I've already mentioned, The WInter Soldier doesn't always balance everything it tries to do especially well. Certain side plots and minor characters seem to exist only to move the greater storyline along and contribute little to Winter Soldier's singular narrative. Especially egregious is the eponymous seasonal warrior himself who, in spite of being a major antagonist throughout this film, proves at the end to only be there to set up the next sequel.

The real villain here is the current climate of over security, surveillance and reliance on military spending. The culture of distrust that leads to a fear of any and all potential domestic threats in turn gives way to treating all of America's citizens like they are a threat. A powerful military power is raised from the legacy of Hydra and Arnim Zola (Toby Jones) and suddenly this major Hollywood blockbuster starts to look startlingly revolutionary.

None of this political intrigue is introduced at the expense of good old fashioned fun and adventure. While it suggests in one instant that in order to build a new world we may have to tear the old world down not just through radical thinking and recruitment, but through enormous personal sacrifice, it still takes every opportunity to remind us that we need to enjoy our lives while we can, perhaps because the right moments for these great personal sacrifices could be right around the corner. The movie embraces just enough of its own silliness to make all of this palatable. An expositional montage with an appropriately over-the-top voice-over, for example, sublimely juxtaposes actual footage of soldiers and weaponry with hidden Hydra symbols and the crazy hyper-modern technology that exists in the world of the film's present, reinforcing all of these ideas brilliantly. 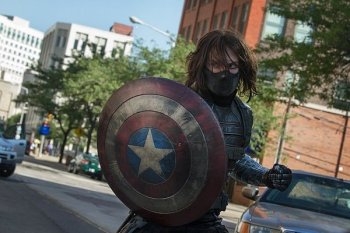 And here is the toy commercial section.The main reason that this works is because of Steve Rogers himself. In a time when arrogance is seemingly celebrated and all heroes have to overcome their own cockiness before they can overcome any physical struggles, it is refreshing to have a character who is humble but positive; he trusts his teammates and understands his own strengths. There is so much potential to be boring here and so it is to the great credit of Chris Evans along with screenwriters Christopher Markus and Stephen McFeely, who previously penned both The First Avenger and Thor: The Dark World (as well as Pain & Gain, so we can perhaps credit them with making even Michael Bay look good). As the film goes on, we see his can-do attitude and progressive-even-for-today idealism infecting the rest of the characters in the film.

The rest of the ensemble all do pretty great work too. Johansson continues to prove that she's a better actress than anyone is willing to admit and the dynamic between her and Evans carries a great deal of the film's running time. Dynamics are what it's all about, often drawing parallels between Steve Rogers' relationships with his old lost war buddies and his new best friend Sam "Falcon" Wilson (the always enjoyable Anthony Mackie) and of course these progressive young revolutionaries need to be offset with the old-fashioned "realists" in the form of Nick Fury and Alexander Pierce and you know you're guaranteed to enjoy watching seasoned movie stars Samuel L. Jackson and Robert Redford interacting.

MINORITY REPORT: As more and more TV directors jump on the Marvel Cinematic Universe bandwagon, with increasingly strong results, Joss Whedon is really in danger of looking like a chump if Avengers 2 doesn't pan out. - Joseph "Jay Dub" Wade