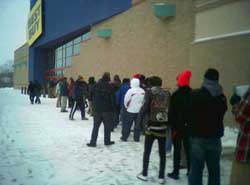 All over the world people are traveling over deserts, mountains, and by sea in a vain attempt to find this year's hot Christmas toy, the Nintendo Wii. I tried to play it cool and pretend I didn't want one, telling myself that the Wii is for babies. I could only hold out for so long before the hype consumed my soul and soon I too was out looking for a Wii.

My journey was one fraught with challenges and hardships, all for an opportunity to purchase an overpriced piece of electronics that plays games very similar to those that can be operated on consoles I already own sold by a multinational corporation that sits back and laughs at my futile attempt to purchase their overhyped game system.

This is my story.

I arrived at Best Buy fully aware that I was an asshole for even thinking about waiting in the freezing cold to purchase a game system. Already having an expansive library of video games that spans every single genre imaginable that you've only played once or twice and never thought about again isn't enough I suppose. You're always left wanting more. Unable to wait a couple months for demand to die down and spare myself the embarrassment of this story, I found myself a spot in line.

From my estimate there were about 40 or 50 people in line. A third of the waiters appeared to be creepy looking Fatwallet loners. You know, the kind that will start a war with K-Mart because they didn't honor a typo in a Sunday ad. Yes, they honestly meant to discount that $2,000 television to 60 cents and they are just trying to defraud you out of a good deal.

Another third looked to be parents who just wanted to get their kids this year's (and last's) hot new Christmas toy. You know, good honest people taken in by all the marketing hype. They stood around and passed the time by striking up conversations with each other. I felt good that the line wasn't entirely populated by fat greasy video game nerds or Fatwallet losers and I tried to assimilate with them, but I was eventually found out and told to stand somewhere else, away from the normals. 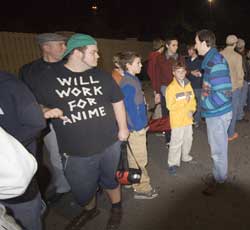 Meet new and interesting people while waiting in line for your baby console.Because I was part of that last third of humanity waiting for a Wii, you know, the guys who actually want to play with the thing, video game nerds. I kept telling myself that I wasn't one of them, that I was here for another reason. Uh, I'm not standing in line for a Wii! Lord no! I'm, uhm, here to buy, uh, Rush Hour 3 on Blu-Ray DVD! Yes, that's it! Oh man, I can't get enough of ethnically mismatched comedy action!

Okay look, I'll level with you. There's this really obscure Japanese anime that is coming out today and I want to be the first to post screengrabs of the scene where Oashi fondles his little sister to this message board I post on.

At least they left me alone at that point.