An hour and a half later I was in the boondocks. I drove to the joint according to the directions on MapQuest but instead of finding a Target safely housing my soon to be Wii, I found a vacant lot. How could a forum user give out bad information?! It just didn't add up.

I decided to drive down the road a couple miles to see if there was a Target or another store, any store, that had Wiis stocked. By this point it was so foggy that I couldn't see ten feet in front of me and had to pull off the road. Against my better judgment I decided to walk even further down the road in search of the elusive store. Nothing was going to stop me from becoming a total consumer whore.

After what seemed like hours of walking I finally found the town. I tried to seek out someone to point me in the direction of the nearest electronics store, but the place was abandoned and looked like it had been for quite some time.

Off in the distance I heard static. It was coming from a construction site. I ventured forth hoping the construction workers would know where I could find a Wii. I came to a tunnel and found the radio. As I picked it up one of the locals attacked me! He must've known that I was here to get that Wii. I found a wooden plank to defend myself with and after a couple of awkward hits the thing went down. 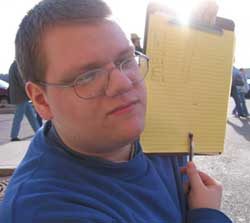 I AM KING OF THE WII LINE!I continued through the town and came across a park. In it was a woman wandering around. She said her name was Maria and that she got lost looking for a Wii for her kids. She too was called here by a hot tip on an Internet forum. I didn't want her mucking up my chances of finding one so I started to leave. She said she was scared and asked if she could join me. I let her, but only if I got dibs on the first Wii we found. Bros before hos, and Mario was the closest thing to a bro I had.

We searched for two hours for a Wii but every single door was locked. It was then that the radio started emitting static again. I tried to tune it to the local news station so I could find out when the fog would lift but the static just got louder and louder. It was deafening. We turned around and suddenly, oh there's the Target. Damn MapQuest.

I entered the store and asked the first employee I saw for a Wii, my hands shaking in anticipation. The employee turned around and it was a puppy! He was operating some sort of computer console. I saw myself on his monitor and a map displaying all the stores I've been to. I fell to my knees and pounded my fists on the floor. Damn you! So it was all your work! Damn you to hell!

I started playing Transport Tycoon again and forgot all about the Wii.