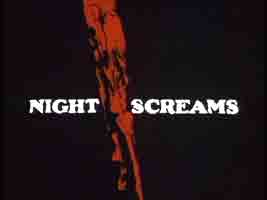 Overview: A bunch of preppy high school seniors throw a party, unaware that two escaped convicts are lurking in the house. Then people die for some reason.

The Case For: Can be used as a guide for how not to talk to women, everyone that you want to die dies.

The Case Against: The characters make decisions that no one in the history of the world would ever make, everyone in the movie is worthy of hatred, most of the murders are poorly conceived and executed. Also, the ending. Oh God, the ending. 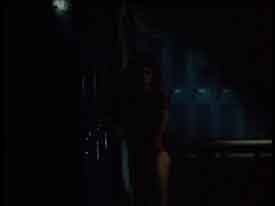 Just when you thought it was safe to throw a party in a huge, remote house when your parents are out of town and there are two convicts on the loose, you had an aneurysm. It's probably for the best, since you were obviously too stupid to live. That sort of thing is never safe. That's why people make incredibly repetitive horror movies - to pound it home that if you are a teen with a bright future, you should not throw a party under any circumstances. Everyone will get murdered, and they won't want to come to your next party, which you also shouldn't throw. I don't know if any movie makes that point clearer than "Night Screams," Allen Plone's masterful depiction of teen angst and boobies.

Plone's no one trick pony, though. He made a film that not only teaches kids why they shouldn't throw parties, but also teaches prospective filmmakers how to cut corners and still produce a complete project. For instance, insignificant things like lights, talented actors, any sort of camera equipment beyond the camera itself, decent microphones, and a workable script are nothing but dead weight. Also, why spend valuable time organizing your scenes, when you can just take random shots and throw them together in any order? Keep in mind, just because a character exited by going downstairs into the basement doesn't mean that same character shouldn't enter by coming downstairs from the second floor in the next scene. And remember, continuity is just a big word for "sense." Get rid of it, and you'll be directing like Allen Plone in no time! Then you'll finally have an excuse to kill yourself! 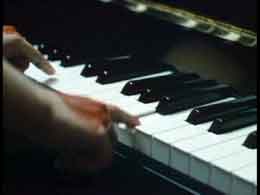 If you're looking for good "I just killed two people" music, you can't beat "Chopsticks." If you killed three people, though, it's "November Rain" by Guns n' Roses. Rockin'!

Plone doesn't waste any time in getting to the goods. "Night Screams" starts with a shot of a girl changing out of her underwear and into her bathing suit inside a locker room. That's about as classy as it gets. Suddenly, the lights go out. It is pitch black, setting the pace for the rest of the movie (tagline: "In the dark... no on can see you scream!). A gigantic pair of eyes flash on the screen for some reason, and we shift to a girl shaving her legs in her underwear. Just as she gets stabbed through the neck with a fencing foil, it is revealed that what we've just seen was nothing but a TV movie. Two sinfully ugly hicks lay on their couch, hypnotized by the images on their magic picture box. The male hick gets up to make burgers. The camera has a hell of a time following him out to the grill, probably because the camera is being held by a pair of wild ferrets. Back on the couch, the female hick gets stabbed in the back. The male hick comes back inside, and, finding his sister/wife murdered, proceeds to act as badly as possible. Mercifully, he gets stabbed, too. Bloody hands play "Chopsticks" on a nearby piano. Nothing says "evil" like "Chopsticks." Oh wait, I meant "everything." Everything says "evil" like "Chopsticks." Yeah, that's it. 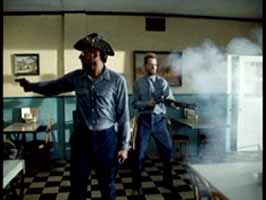 No, they're not shooting at anything in particular. Yes, they're idiots.

After the title credits finally roll, we are treated to a mental hospital doctor recording a note to himself. He mentions something about the patient succumbing to violent behavior, but that medication should even him out. And who is this mystery patient? If the awkwardly filmed, but conveniently timed cut is any indication, it's David, who looks like a cross between Frank Stalone and Bronson Pinchot the star quarterback for this quiet, unassuming Oklahoma high school. He scores the game-winning touchdown, which somehow clinches a four-year scholarship to Oklahoma State for our young hero. David's parent and girlfriend, Joni, are just ecstatic about it, but David is moody and depressed. I know I was moody and depressed when I got into college. Well, buck up, David, things will get worse. David's father has a thick southern accent, which bears mentioning only because he's the only person in the movie with any trace of an accent whatsoever. I've never been to Oklahoma, I don't know what they sound like there, but for the number of people wearing cowboy hats in this movie (almost every male), there need to be some more comical southern accents.

Two dumb cops pull up to a rathole called Jake's Cafe. They debate over the precise police procedure regarding who gets to order the coffee. The ranking officer wins, refusing to let the rookie bring him his coffee. Every cop drama I have ever seen has lied to me. The cop casually tells Jake that two convicts have escaped from prison and are in the area. Both cops are then immediately shot by Snake and Runner, the two convicts, who apparently went to prison for being too traumatizingly ugly to function in normal society. Inside Jake's Cafe, there is a third convict who says that he masterminded the jailbreak, but he has no real bearing on the plot, so I guess the cop just forgot to mention him. Snake decides to beat the nameless third convict to a humorously bloody pulp because the third convict yelled at him for shooting everyone in the cafe. 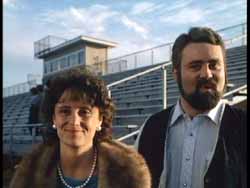 In the guys' locker room at the high school, the other guys congratulate David on winning the scholarship, so he becomes moody and depressed. His best friend, D.B., is able to cheer him up for approximately four seconds. Even the wacky antics of Russell, the team's requisite fat moron, can't shake David out of the post-victory blues. In the girls' locker room, the cheerleaders titter about a party at David's house that night while in various stages of undress. Joni, who is not a cheerleader, but likes hanging around half-naked girls, pines for David, and basically every other girl in the room follows suit. Yep, nothing like a sullen, violent sociopath whose face looks like it escaped from Easter Island to get the ladies going. Outside, Russell dances like a schmuck for the first of many times in the movie, eventually collapsing on the ground. He's obviously supposed to be the comic relief in this movie. Unfortunately, he isn't even remotely funny. As David passes by, he gets angry at nothing and tosses back a few pills. Over the course of the movie, he consumes enough pills to mellow out every hyperactive child in the western hemisphere. They do absolutely nothing for him. David meets up with his parents, who are about to go away for the weekend. His mother reminds him to take his medication and his father tells him not to throw any wild parties. Hey, guess what two things aren't going to happen! Meanwhile, Snake and Runner stumble across a huge house in the middle of an empty field, and decide to break in. Several hours later, they succeed. How nice for them.