One of the interesting things about waiting in line for some stupid toy is how people will justify the experience to themselves. Unless the answer is anything but, "Well, it's for my kids and I don't mind waiting a couple hours to do something nice for them", you're a faggot. And not the good kind of faggot who sucks on penis but the kind that thinks Earthbound is the epitome of gaming.

Like the guy ahead of me, who didn't like all the parents and resellers waiting in line with him. After I mistakenly attempted to initiate conversation with him he said something like, "We've been playing Mario all our lives. We should get first dibs and they should get whatever's left. We actually want to play the game, not sell it or give it to some bastard kid who won't even appreciate it." Who's this "we" you're talking about? I'm in line for Rush Hour remember?

Eventually the store opened and the parents, unmarred with a lifestyle of sedentary computer usage, ran inside and bought up the first batch of Wiis. The Fatwallet losers, unmatched in their girth, kept us video game nerds at bay and bought up the second batch of Wiis and by then, they were sold out. Defeated, I headed home.

In the corner of the parking lot a woman showed up with a sign that said "Wii 4 SALE - $600" and asked me if I wanted to buy one. I told her that I didn't want to encourage Wii scalping by feeding into such a cycle myself. She started screaming at me and called me a poor loser that probably couldn't even afford a Wii. The dangers one must face for Mario.

While I could have told you I hit her with a pretty rad comeback or something comparable to Al Bundy's legendary jabs at overweight women, I actually mumbled something incoherent and scurried back to my car. 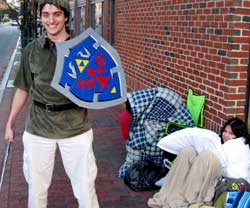 I hope this guy doesn't get mad at me for stealing his picture. Something tells me he'll keep his identity a secret though.As I was leaving a guy ran up to me and said, "Hey, I couldn't help but overhear you talking about that one anime. That comes out today?! Awesome!"

I found a hot tip on a message board about a Target 90 miles outside of town that was scheduled to receive a massive allotment of Wiis in the morning. The only thing I needed to do was think of an excuse to justify driving all that way to buy a video game console without looking like a giant dork.

Failing that, I hopped into the car and hit the road. I brought along a bunch of Mario, Zelda, and Metroid music CDs to keep myself occupied during the long drive. Hey, my grandma always said that if you're going to act like a queer, you might as well go all the way.

I didn't care. I was finally going to get my Wii! All vestiges of cynicism that protected me from the world's criticism left me as I fully embraced my nerdom. For the first time in my adult life I was actually enjoying myself and didn't care what anybody thought of me! This must be what furries feel like all the time, I thought. I felt like a kid again, experiencing that same excitement I hadn't felt since I opened my first Nintendo under a non-judgmental Christmas tree.