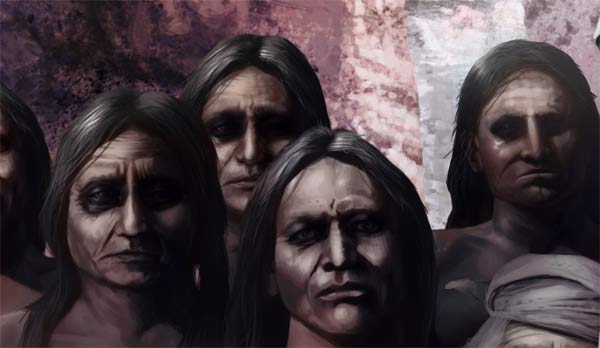 "You will remain here when we are gone," says River Stone, repeating my plan. "So we have prepared a room for you to wait."

He takes me up to the highest outcropping and shows me the narrow entrance of a cave. To my surprise the chamber opens up within, the walls shaped with flint chisels, reaching up as a dome that is colored white with some pigment. Upon the white surface of this dome are hundreds of black cruciform shapes.

"This is the shape of your body in the sky," says River Stone's brother.

From wood they have made a platform large enough for me to sit upon. Around the walls the others have left images, simple, but depicting the water and the danger it poses to any who might come upon this place.

"Hmm," says River Stone and I do not know what this means.

The tribe files out of the cave.

Later, after they have a meal, the men and women of the tribe lay down upon the ground. They place their bellies against the rock and their faces into the stone so that only their backs and their black hair shows. I scuttle into the cave containing the pool and, with a straining effort, I roll the gold-sheathed rock into place atop the pool. The seal is not so perfect as I would have hoped.

"It is time," I say, emerging from the cave.

The axe is made from black rock and a length of timber. River Stone hefts it in his hands.

"I am long in years and this will be unpleasant work. Will you help me?"

The stone axe cracks as it is brought down against the back of the head of the first man lying upon the ground. The skull gives and the man's red lymph runs out. I use a large stone, held in the claws of my forelimbs, lifting it and dropping it upon the heads of each man and woman in the line. In this way, after only a few difficulties, River Stone and I slaughter the entire tribe.

"Has it?" he sighs. "Do you know if we rest at last or if we only have gone to some other place?"

"I cannot know this for certain," I reply. He seems satisfied with my answer.

I grasp River Stone's head in the claws of my forelimbs. His eyes are dark and unafraid.

"Carry me to the night," he speaks to me.

With a quick motion I detach his head from his body. Red lymph pours upon the stones in a great quantity, mingling with that of all the other slain men and women. I drag their bodies into a fire pit and I make them burn. The smoke is thick black.

I take one last look at the village, recalling the many days I have spent among the humans. I climb the canyon face to the upper cave and take my place upon the platform the tribe has built for me. I steady myself and place my claw against the flexible gap between my prothorax and head. The serrated edge of chitin easily passes into my softer tissue and opens up my circulation to the air. My lymph flows down my thorax and spills onto the ground at my feet. There is some pain, but it is over quickly and I inhabit darkness.

I arrive with the booming of a titanic storm muffled by the fluid surrounding me. I rise within the water, my body dragging against joints of metal, tearing my cowl, exposing me to the boiling liquid. I am heaved upon a ramp, tilting as if the surrounding room has partially collapsed. I am within a spire of unknown construction, gray light and storm clouds are visible through a hole in the ceiling. Nearby, an unseen ocean crashes.

The hole in the roof is too small for me to escape. I climb, instead, through a jumble of collapsed tunnels and abandoned rooms. Moldering signs and peeling posters depict six-eyed quadrupeds resembling isopods. Water spills into the hallways and slicks the rusted iron of the floor. I emerge upon a rain swept platform of immense scale. A profusion of metal structures, including habitats, towers and finned poles, cover the sprawling surface of the platform. The ocean crashes and drums beneath my feet, but I know without seeing that it is not the sea at all.

The air is thick with the smell of rotting soft meat. The sea of this place, like the Surata, belongs to the water. Something breaks in a nearby building. Animal chattering echoes deeper in the tangle of sagging, metal shelters. Whatever has happened to this place, I am not alone.