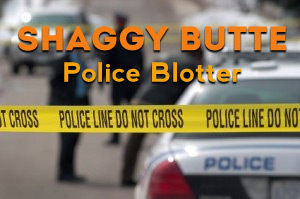 As reported in the Shaggy Butte Courier-Messenger

Walmart,1200 Meridian St, 1:15 am. Reports of a giant man positioned in the exact middle of the parking lot, holding a cat in each hand and spinning wildly in circles in the manner of a tornado. The man refused to stop spinning or release the cats. Officers were unable to get close enough to subdue him without exposing themselves to cat scratches or bites. Police cordoned off the area to prevent him from harming any bystanders.

8th Ave, 2:02 am. A concerned citizen reported an assemblage of teenagers in black leather jackets. The young hoodlums were quickly arrested and driven out to the country where they were released unharmed.

Corner of Stagecoach Road and Red Baron Street, 4:20 am. Patrol pulled over a vehicle that was driving erratically. The driver, identified as the mayor's alcoholic son Pete, was visibly intoxicated. Officers guided him home with only minor property damage reported along the way.

7902 E. Wacamore Ave, 8:52 am. A resident was arrested for carrying his wife around above his head against her will. An officer ordered the man to put her down, but then he grabbed the officer and hoisted him above his head. He was eventually tasered into submission.

1600 Wallow St, 11:37 am. A concerned father reported possible acts of embezzlement from his son's lemonade stand. The pre-teen proprietor was unable to produce an accurate business accounting or explain where he earned the money to purchase the large bag of candy he was holding. The child was taken into custody pending investigation.

Downtown, 12:22 pm. A spontaneous massing of dogs caused momentary panic, but the estimated 1000+ feral canines were quickly dispersed with tear gas. Residents were only forced indoors for a modest 20 minutes, and no injuries were reported.

Elmswood Park, 2:36 pm. Officers investigated reports of a crazy man living in a cave on park grounds. Officers discovered the cave, but found only dog bones and soiled clothing, which were later claimed by the mayor's harelipped son Carl.

Shaggy Butte Homeless Shelter, 441 Boroughs St, 3:12 pm. Multiple persons complained that skateboarders were "grinding" on the homeless. Officers responding witnessed the malfeasance firsthand and gave chase, but were unable to apprehend the skateboarders who escaped via a ramp.

NE Champion Way, 8:12 pm. Officers were dispatched following reports of a nude man walking a horse. The man claimed he was simply exercising his horse, and officers escorted both he and the equine back to the trailer where they lived.

10th St, 9:15 pm. A distraught, bearded man reported the theft of an animatronic singing gorilla from his personal collection. Officers discovered the gorilla in a ditch some three blocks away by following the sound of worried singing.

1600 block of Charming Dad St, 10:24 pm. Officers responded to numerous complaints of an angry man honking his horn. Officers discovered he was not angry, and actually quite jovial and having a good time. No further action was taken.

Boring St and Broom Road, 11:05 pm. A man who robbed a woman was found under a tree counting his coins. Officers let him go after he apologized and gave back the money.

1257 Tortoise Ave, 11:57 pm. Officers responded to a 911 call from a woman claiming to be under attack by army ants. First responders arrived too late, as the woman had already been skeletonized.