Remember Me? I'm a Friggin' Missile 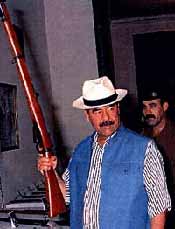 With each passing day, more and more Americans resign themselves to the thought of impending war. In fact, we've basically stopped preparing for war with Iraq and started looking more closely at North Korea. We tend to think of the war with Iraq as being over already. Hell, we won it once, there's no reason to think we're not going to win it again. Iraq isn't really much of a country. It's basically Saddam, his cabinet, and a whole bunch of really scared Arabs running around and starving to death. Someone should tell them they'd starve to death a little slower if they didn't wear themselves out running around. The point is, Iraq doesn't offer much in the way of an enemy. North Korea, on the other hand, there's a country worth worrying about. They have nuclear capabilities and they seem to be convinced that they're far enough away from us that they could use them and not suffer any real consequences. These guys are itching to fight. They'll take any excuse they can get to start shooting people. You can't send them a birthday card without it being declared an act of war by their council of most honorable elders, or whoever calls the shots over there. Frankly, I think they're getting a little cocky for people with only half a country. We may have to go in there and smack them around a little until they learn that if the name of your nation includes a cardinal direction, you're not big enough to rumble with the U.S.

My thoughts had been on North Korea for some time, with little regard for Iraq, until this article caught my eye.

A United Nations team found the warheads at an Iraqi ammunition depot overnight, but a senior Iraqi official denied that they were chemical weaponry or banned.

General Amin, whose agency liaises with the inspectors, said: "It is neither chemical, neither biological. It is empty warheads. It is small artillery rockets. It is expired rockets, and they were forgotten without any intention to use them."

"They found out some ... boxes, but they are unopened boxes, sealed boxes, and they asked to open those boxes," General Amin said. 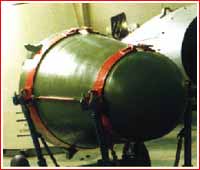 You know, I misplaced one of these once. Oh wait, no I didn't BECAUSE THEY'RE HUGE.

I'm sorry, could you run that by me one more time? They forgot about eleven warheads that were built for the specific purpose of carrying chemical weapons? That's not something you forget. The formula for computing the volume of a rhombus, that's something you forget. At first I was against the war with Iraq, then I grudgingly accepted its inevitability and started focusing on other issues. Now I think we should go in there and spank them silly just on sheer principle! Where does Iraq, one of the most easily and frequently bitchslapped nations in the world, get the balls to say that they "forgot" about eleven warheads? After all the years that Iraq worked to keep out U.N. inspectors, to then uncover something like this just sitting in boxes is more than a little insulting. Come on, Iraq! You've had all this time to hide your warheads, and the best hiding place you could come up with was "sealed boxes?" For shame!

And since when was "we forgot" an acceptable excuse in international politics? If they said they were going to send Bush a free t-shirt and never did, I'd let them get away with "we forgot." Having eleven warheads stashed in a closest, that's not forgettable material. Iraq has to have some nerve to have weapons laying around like that and try to blame it on a brain fart. What are we supposed to say to that? Do they expect us to say it's okay? "Oh, they just forgot about the chemical weapon-delivering warheads they said they didn't have. Hey, it happens to the best of us, don't worry about it." Then next week we find out that they "forgot" about a laboratory deep within the earth where horrible experiments are being conducted to create a race of superintelligent, hermaphroditic gorillas and -BAM! - there's a damn dirty shemale ape planting an Iraqi flag on top of the Capitol Hill. No, we can't let them squeak by with a flimsy excuse like that. Can you imagine history if America considered "we forgot" to be a useable diplomatic strategy?

Franklin Roosevelt: "Say, Adolf, I heard something about you killing six million Jews. You don't have any death camps, do you?"
Hitler: "Uh... no."
Roosevelt: "What about those camps over there?"
Hitler: "Oh, those death camps! Yeah, sorry, I forgot."
Roosevelt: "Hey, don't worry about it. It's cool."