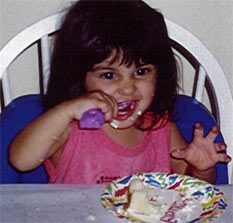 CAKE!!America is a nation obsessed with deliciousness. You can see it in our bloated shambling bodies and you can taste it in almost every pre-packaged or fast food available. If making people fat was a science then America is about twenty years ahead of any other culture on the planet. The prime offenders are not always the most obvious targets of "evil fat-makers" media backlash. You always hear about McDonalds and Burger King pouring butter-slathered deep-fried cheese burgers down the gaping maws of will-less consumers. Let's face facts here though, McDonalds and Burger King's fatty foods are obsolete, they are being supplanted by technological advances in the field of making Americans swell. Today we're going to take a look at some of the prime offenders that make a Big Mac look like a celery. Think of it as a Popular Science expose, only instead of being about some Mars Lander with "space sails" or some stupid crap we're talking about the bleeding edge of fattening food science. 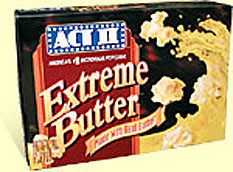 Tubular wave dude! Catching some radical surf on Butter Bay!What They Say: "For those who really like to live on the edge, our highest-impact butter flavor is Extreme Butter."

Description: The packaging for this popcorn might as well just be a big warning label about heart attacks. It features a whopping total of four pieces of popcorn SURFING on a wave of butter. Apparently the target demographic for ACT II's latest and greatest popcorn consists entirely of people who have a hankering for pouring liquid butter down their throats. The use of the word "extreme" and the butter-surfing motif is a sort of appeal to the inner Vin Diesel in every corpulent body unwilling to arise from the couch. This popcorn and its wild butter flavor are totally in your face and are just for those who like to take risks. You could have a pulmonary embolism at any second from snacking on this, but you don't care, because you are just that extreme and intense!

Possible Improvements: The one thing this product really lacks is sugar. Sure there is some in there, but I just don't think it's doing quite as much damage as it could be. Hopefully ACT II will get the picture and in 2003 will release an Extreme Butter offshoot called Extreme and Sassy Butter that features sugar cubes surfing on a wave of butter. I mean really, air-popped popcorn is borderline nutritious, what the hell is the point of that? Seriously ACT II, get with the fucking program fast before these other companies release their Extreme Butter Fried Pork Popcorn. 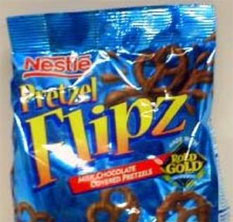 Who knew that crack-cocaine could be legally sold at convenience stores?!What They Say: You'll flip over NESTLÉ FLIPZ! They're so completely irresistible you'll make up excuses to eat them.

Nutrition Comparison: 3 acres of sugar cane and a gallon of lard and fudge slurry.

Description: No more sage advice has ever been given than "never try Flipz". These satanic snack treats consisting of salted pretzels dipped in fudge are the most addicting food ever created. Sold primarily in oversize packages containing about six servings, each bag of Flipz begs to be consumed as quickly as possible, beckoning you to smear your face and lips with the instantly melted chocolate coating. Methadone clinics should take a page from Nestlé and start offering bags of Flipz to heroin junkies trying to kick their quaint little habit. The only down side to these things is that a prime opportunity to add more fat calories is missed when using pretzels, which are baked.

Possible Improvements: Striking an almost religious balance between addicting snack food and horrible nutrition value, Flipz still have an Achilles heel as I mentioned in the description. If Nestlé could develop a version of Flipz that replaces the inferior baked pretzels with either fried pretzels or some other fried snack food then they would achieve some sort of horrible snack food apotheosis. Since I know executives at Nestlé frequently read Something Awful I would like to take a moment to suggest their new product; Nestle Pork-Rind Flipz. The salty deep-fried flavor of pork skin would create a porous pallet for the fatty fudge to seep into and would appeal to a wide market segment that considers pretzels too "high brow" or "snooty".

What They Say: Vanilla Ice Cream with Gobs of Chocolate Chip Cookie Dough! They also probably have a wad of stupid hippie shit on the packaging somewhere too.

Nutrition Comparison: A lab Petri dish of salmonella dumped into a frozen soup of cow entrails.

Description: Combining the health sensation of ice cream with the waist-watcher's favorite raw cookie dough, Ben and Jerry's has gone a long way towards creating a force feeding fetishist wet dream. When you consider the ingredient list that reads like one of those horrible weight-gain shakes you'd see Jim Belushi putting in a blender to save time in a movie about a cop gone bad you have to realize the sheer perfection in girth enhancing snack food that Ben and Jerry were shooting for. The taste of the ice cream resembles what you would get if you cooked butter, mixed in sugar, and then froze it with chocolate chips inside. This ice cream doesn't make your teeth hurt, it makes your gallbladder hurt.

Possible Improvements: Filthy hippies Ben and Jerry seemed willing to reach for that gold ring with this product, but must have rushed it through research and development before it had been refined to perfection. I suggest adding three-cheese ravioli to the flavor train wreck, a high-carbohydrate and high-fat pasta would really give those finishing touches to this Zyklon-B of ice creams. Another option would be some sort of oil. Just dump in like a cup of olive oil or something, or even heat the whole thing into a liquid and dissolve fats into it until it's a super-saturated solution. 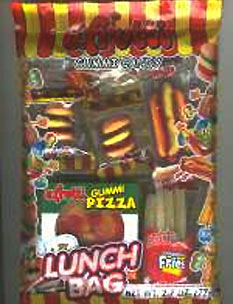 O Fortuna velut luna statu variabilis, semper crescis aut decrescis!What They Say: Everything You Need For A Great Gummy Lunch. Or, as I prefer; "You thought you were safe, but welcome to The Rapture."

Nutrition Comparison: A tub of gelatinized animal parts, heavily sweetened, and painted with artificial colorings that are made from cobra venom.

Description: If ever there was a snack food born of hell this is it. Conceived in the deepest torture pits of the abyss by demons of gluttony and artificial flavoring, the Gummi Lunch Bag is an abomination made form. It consists of a variety of already terribly unhealthy foods like hot dogs, hamburgers, and pizza, only made out of Gummi candy. All of the candy resembles the actual food items to a frightening degree thanks to the liberal application of a wide variety of artificial colorings. What's worse is the whole thing is marketed, somewhat jokingly, as one of those lunch kits for kids. If some parent ever actually sent their kid to school with one of these things as lunch they should immediately have their parenting license revoked and have their kids sent away to Siberia or somewhere that Gummi candy isn't sold. Just the psychological scars of eating this for lunch are as damaging to your health as any of the other products I've covered.

Possible Improvements: The one thing this product lacks is an extremely high fat content, it has pretty much all the other unhealthy bases covered. To achieve this the diabolists at the Gummi factory have two options. The more feasible of these two would be to inject some sort of lard or cream into all of the Gummi candies with a syringe. The even more effective, and thankfully technologically impossible, method would be to cook the foods that the Gummi candy is intended to represent and then use a shrink ray of some sort to miniaturize them. This would maintain all of the fat and calorie content of the original full-sized versions, providing a sort of depleted-uranium bullet aimed at the gut.

I wish that these products I've covered were far and away the worst things out there. Unfortunately, with the exception of that Gummi Lunch Bag shit, the bloat-factor of these products is all too common. For example that Extreme Butter popcorn from ACT II is just one of a number of butter overload popcorns on the market. It just happened do have the most retarded name and packaging. Flipz are certainly not unique, they just represent the ultimate realization of decades of advances in pretzel and chocolate fudge technology. They are a confluence of science and tastiness that is nearly as irresistible as oxygen or water.

Awash in a consumer market of gluttony I wish that I could claim I was the stoic rock, immune to the petulant cries of burritos demanding to be eaten. Then I could condemn all of these products from on high and not feel the hypocrite. Instead I am as weak willed as most of America, shoveling down everything I can find with "AWESOME SALT EXPLOSION" or "INTENSE CHEESE FLAVOR BURST" written on the packaging in bold letters.

Josh "Largestick" Boruff here yet again with the usual Phriday tidings of discomfort and joy. This week brings us Variety Pack #4, which features both communism and commercialism working together for comedy. Stop on by and check things out! 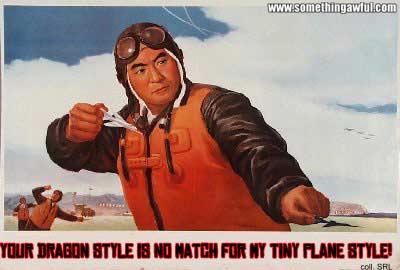 Remember when I said to stop on by and check things out? Yeah, me too!